I can't say I've successfully adopted that plan for myself. But it certainly makes sense....doesn't it?

Luke said:
If it hasn't been used in a year, toss it out
Click to expand...

Too many Jokes. Must show restraint . . .

Luke said:
If it hasn't been used in a year, toss it out
Click to expand...

First 7-8 years my wife and I were married we moved every 6 - 18 months, if it hadn't been used since the last move it didn't get moved.

There's a lot of information here, I'm going to give some replies with my thoughts in no specific order or to address specific posts (otherwise I'd probably need to create a bibliography).
I'm sure there's more, but I'll have to go back a reread parts of the thread.

If I have suggestions about thread relocations should I report them here, or use the "report" button that goes to moderators?

Suggestions for thread relocations from Other genres to Color. (Because most photographs are color photographs I don't see the case for this forum but assuming we don't want to stir the fire soon again...)


Unsticky this announcement that has been rendered obsolete:
Then these threads under Other genres could go better under Scenic:
Finally I have a suggestion for renaming the description for "Leica" forum:
"Inventors of the small frame (today known as the "full frame") photography, and autofocus."

mike3996 said:
...Finally I have a suggestion for renaming the description for "Leica" forum:
"Inventors of the small frame (today known as the "full frame") photography, and autofocus."
Click to expand...

But we can't do that, since neither is true...

My credentials? I have used Leica for 30 years. I have a dog called Oscar and a cat called Barnack, as well as a much loved IID. I have in the past used M, R and LTM extensively.

Both of the above are urban myths. Autofocus was, IIRC, invented by a chap who worked for Honeywell. 35mm film was 70mm cine film split, and there were a number of cameras that used it before Oscar Barnack came up with the Ur-Leica (he did so, it is said, because he was tired of carrying the weight of a heavy camera when out hiking). 35mm was originally referred to as "miniature", by the way. Full frame is a misnomer; half-frame (eg Olympus PEN) made sense, since it took twice the number of frames on 35mm film, but full-frame does not make sense in terms of digital cameras; An APS-C (don't get me started on the history of the APS name...) camera with an APS-C lens designed specifically for use with the format is by definition "full frame" - see what I mean? 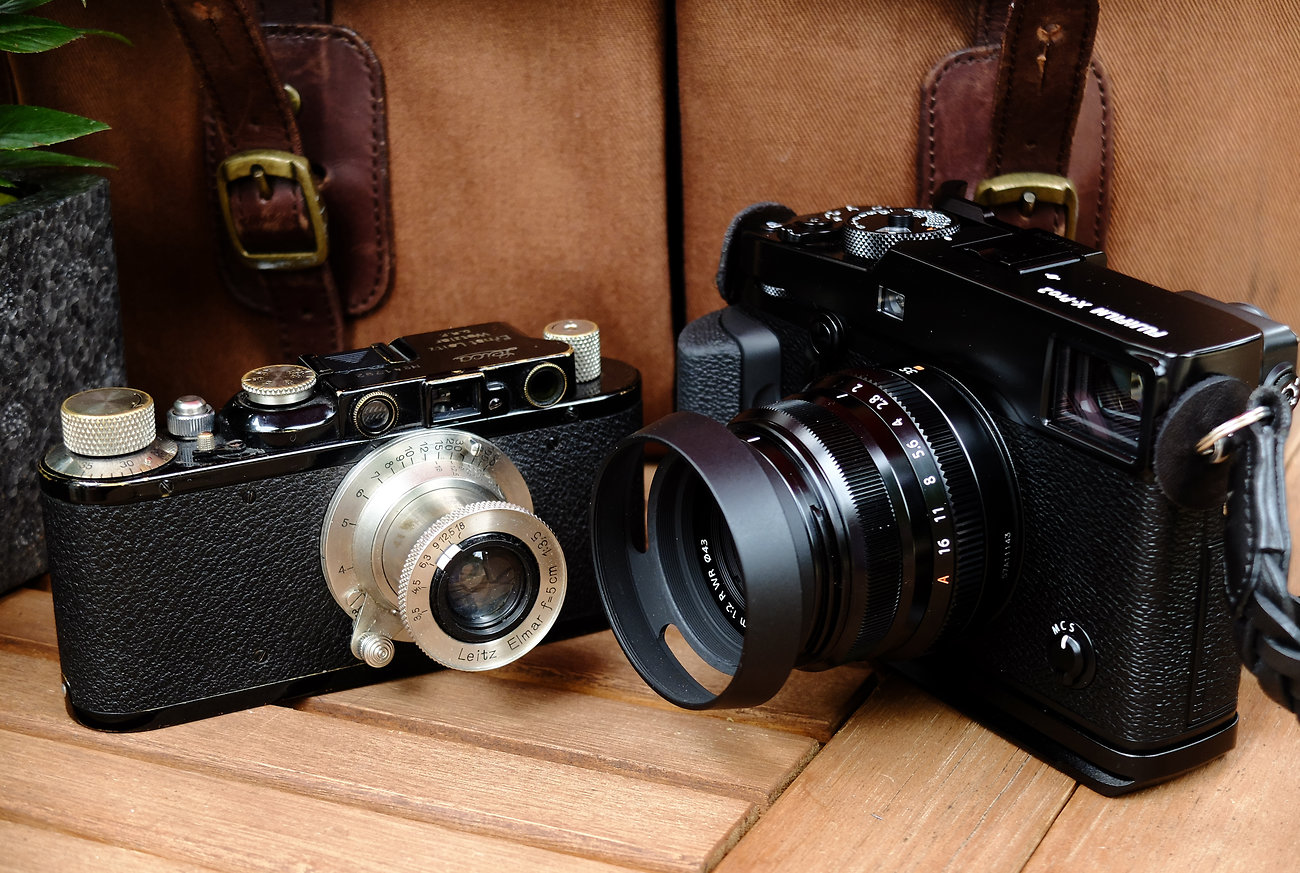 Lightmancer said:
Both of the above are urban myths.
Click to expand...

I kind of knew that Barnack didn't exactly invent 35mm film frame. But it's a common myth and if people wanted quirkiness, then there it is.

Leica did file the patents on phase detection focus and sold them to Minolta if I understood it correctly.

I agree that "full frame" is stupid term, that it somehow was the maximum size a photo sensor could be.

Administrator
If I miss anybody's items or concerns, feel free to tag me. I'm not purposely not responding to every post or item, just trying to keep up while doing the Day Job.


davidzvi said:
M4/3 doesn't have a showcase sub forum, is that because Amin also had the m4/3 forum and it wasn't merged here? I'm not 100% sure we need one, but since that's what I mainly shoot it's something I've noticed.
Click to expand...

{Takes a look.... } Ummm.... I'm not sure. That might be on me, I think at one time the M4/3 stuff may have been under the "Alternative" grouping and I moved it out but missed adding a corresponding 'Showcase' child forum. On the To Do list.

davidzvi said:
The Fuji showcase sub forum could used some clean up if it's really suppose to be just lens sample images. There are duplicates, the 18-55 f/2.8-4 and 50-140 f/2.8 each have 2 showcase threads in the first 3 pages. There are discussion threads and genres threads that should be in the main Fuji forum or in one of the other gallery forums. In Fuji's case (and others if applicable) I would be tempted to leave the simulation showcases.
Click to expand...

Others can chime in with their feelings but I think the 'showcase' forums started out with the intent of highlighting a particular gear item, such as examples of a particular lens combination or a particular feature, but they ended up being used for that purpose and as a general catch-all for images taken with a particular brand. Likely several of the 'Showcase' threads could be closed with new threads/posts being watched so that the general type posts are posted instead to the Gallery forums. A thread of "Here's some tiki idol shots I took with a Canon" should be over in the Gallery forums while a more specific thread of "Here's some sample images I took with the Canon EFS 55-250mm F/4-5.6 IS II lens with dark wood grain subjects" would be better suited for the Showcase forums. Maybe "Showcase" isn't the best word for them? As the Showcase threads go back several years and from several different source original sites it can't be a hard-rule and enforced Draconian style but more a gentle push that new threads/posts should be considered for the Gallery forums first instead of the Showcase & Gear forums.

davidzvi said:
Is Fuji the only system that seems to be generating the news and rumors threads or is that just my perception?
Click to expand...

I think it's just a matter of popularity; the Fuji lines have a lot of fans at the moment.


mike3996 said:
If I have suggestions about thread relocations should I report them here, or use the "report" button that goes to moderators?
Click to expand...

I'll go back and re-read the list later today but you can either post them here or use the "report" button. If I don't catch it then one of the other mods will. You can also start a new thread in the 'feedback' forum so that it doesn't get lost in a big thread like this.
Last edited: Feb 21, 2020

Kevin said:
....I think it's just a matter of popularity; the Fuji lines have a lot of fans at the moment.....
Click to expand...

I think it's more a matter of popularity "here" and that many of the members here are also members of MU-43, NikonCafe, TalkeMount, etc; while the Fuji and Leica sites were merged into here.

My point though is more I wouldn't want the news and rumor threads to get lost in in the Chat area or just lumped in the general brand forums. But I'm also not sure what the best option might be either.

Just one more wish for clarity:
I tried to figure out the difference between the "stroll" thread and the "random picture" thread as I never can really decide in which of the two to put my post. Many of the random pics could show up in stroll as well, because they where taken while outside on a stroll. Even looking at the introductory remarks at the start of the threads didn't bring me more clarity. Whereas this clarity is absolutely there between B&W and high contrast B&W for example.
Last edited: Feb 23, 2020

Kevin said:
Eliminate Herman's Genres dedicated forum - As mentioned, Herman has not been an active member for quite some time and the threads can be moved into their more subject specific counterparts.
Click to expand...

I've moved a couple of the most obvious candidates from "Other Genres" to "Color" (single colour or general colour themed threads), leaving redirects in the "Other Genres" section; I think that's a continuation of what Kevin had started earlier. If anything really offensive turns up, it can certainly be addressed - but I don't see any pressing matters.

There are some lesser irritations, though. For instance, I think I've found something like half a dozen threads called "Decay" - though it'd be a bit tricky to merge them since some of them have turned into discussion threads ... so, things like that need attention and care.