Some of you will be familiar with the aussie fast bowler Glenn McGrath. He lost his wife Jane some years back after a long battle with breast cancer (he has recently remarried). Before Jane's death they set up a foundation bearing her name to raise awareness of and funds to research breast cancer with the theme colour being PINK. We have seen top cricket teams compete wearing pink accessories.

It was the turn of my grandson's team recently and the pink wickets, pads and helmets were provided by the foundation. In this way a sizeable sum of $$$ was raised and everyone joined in the fun (I snacked on a pink sushi roll).

The team lined up for a photo. 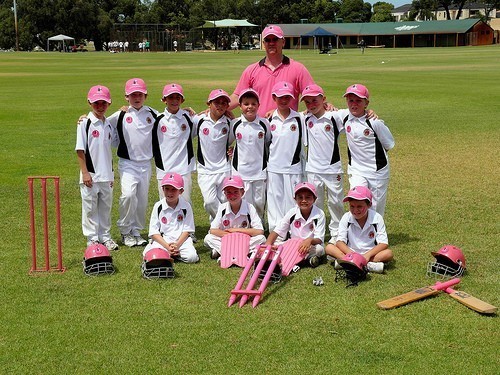 Pink donuts at "tea" (half time for non cricketers). 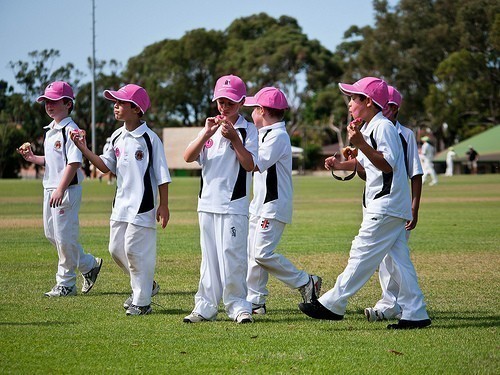 Some of the action. 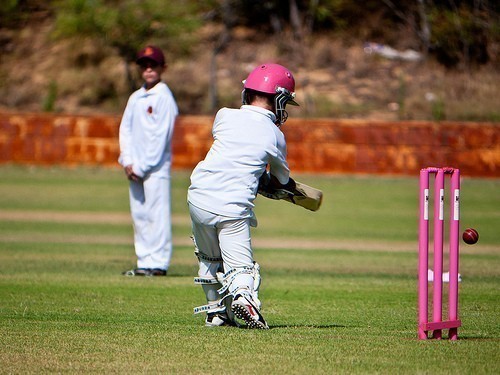 Nice set of pictures. I like the middle one particularly! Nice to see some boy's activities raising funds for the Pink Ribbon Worthy cause, had it myself!

Pdh, why don't we have a pink thread next?

Pink as in the color or the singer?

That last photo is a great action shot, his body movement is so 'cricket'.

The Ireland team at the World Cup dyed their hair or shaved their heads for an Irish cancer charity before the game against England. It seemed to work - they beat England by three wickets.

Beautiful photos, Bill and I'm very your grandson and his fellow teammates' caring, camaraderie and fundraising for an important cause.

That last one - your action shot is really great, Bill! I think you are the team photographer!

Thanks for sharing this story and photos with us Bill... I know nothing of this sport but looks very interesting. A good gesture and great color here.
Cheers,
Pete
A

Great set of pictures..
Especially I love the Uniform color...Its really pretty and will love to see it in International matches as well..

Ayde said:
Great set of pictures..
Especially I love the Uniform color...Its really pretty and will love to see it in International matches as well..
Click to expand...

I really like this pink cricket team.. It looks really pretty awesome..
I love all their uniform and Check all pictures.. That are too good.