JoeLopez said:
Nice job on the bike!
Click to expand...


Mike G said:
Tony, you must be very fit as I cannot imagine doing 18 miles on those big fat tyres, well done!

Thanks Mike. After losing 20 pounds I am a lot more fit than I used to be, but I'm working on losing another 20. The bike has certainly played a huge part in that.

My ride this weekend was along a stream that was a bit swollen from a period of steady rain. 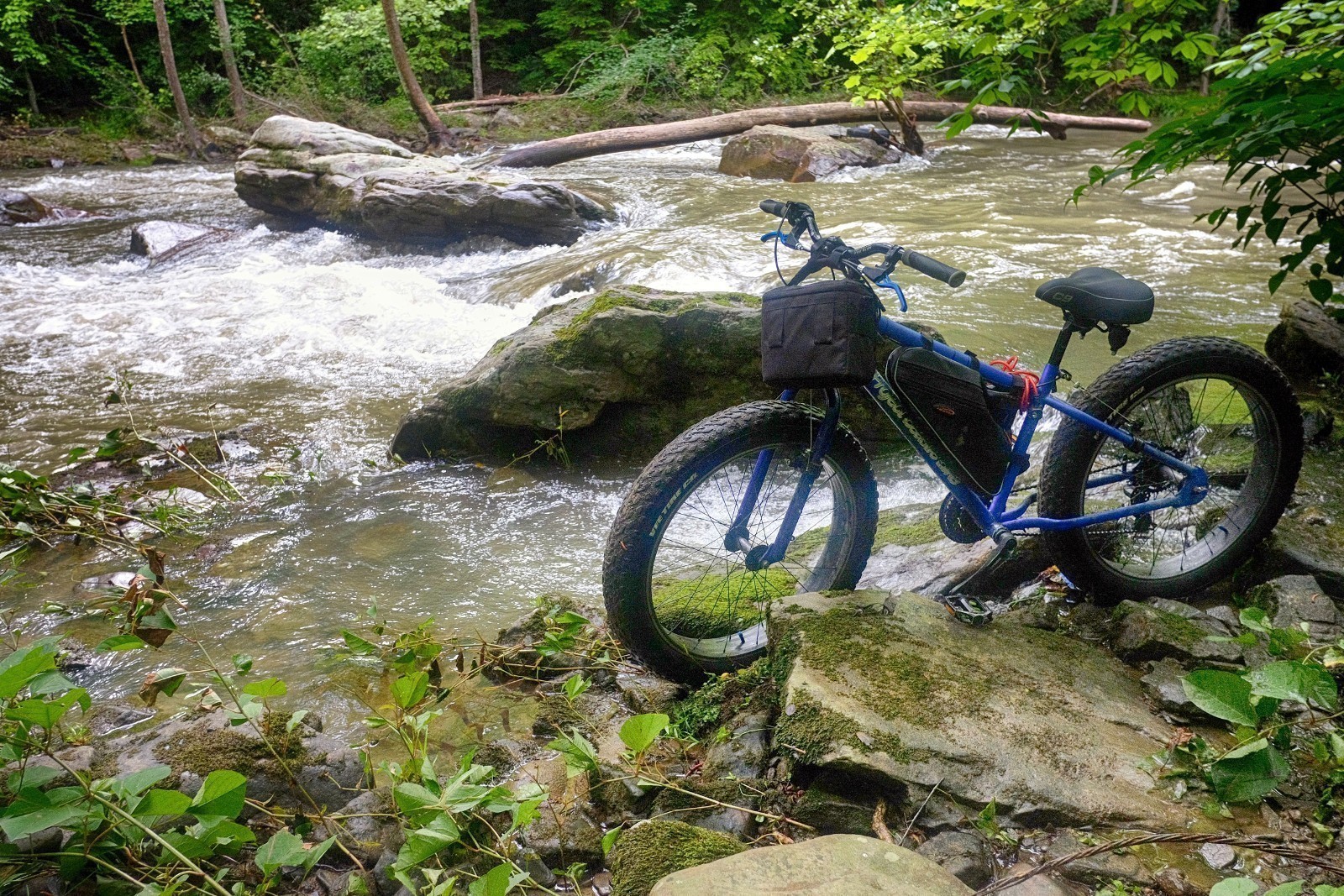 For those that don't follow the SeriousCompacts forum, my bike has a "new" accessory. I converted one of my camera bags using the same parts and method as this guy: Turn A Camera Bag Into a Handlebar Bag - BIKEPACKING.com. My seam on the inside didn't turn out as neat as his, but it otherwise works well. I have a long ride planned for this weekend if the weather holds. Here are some before and after pics: 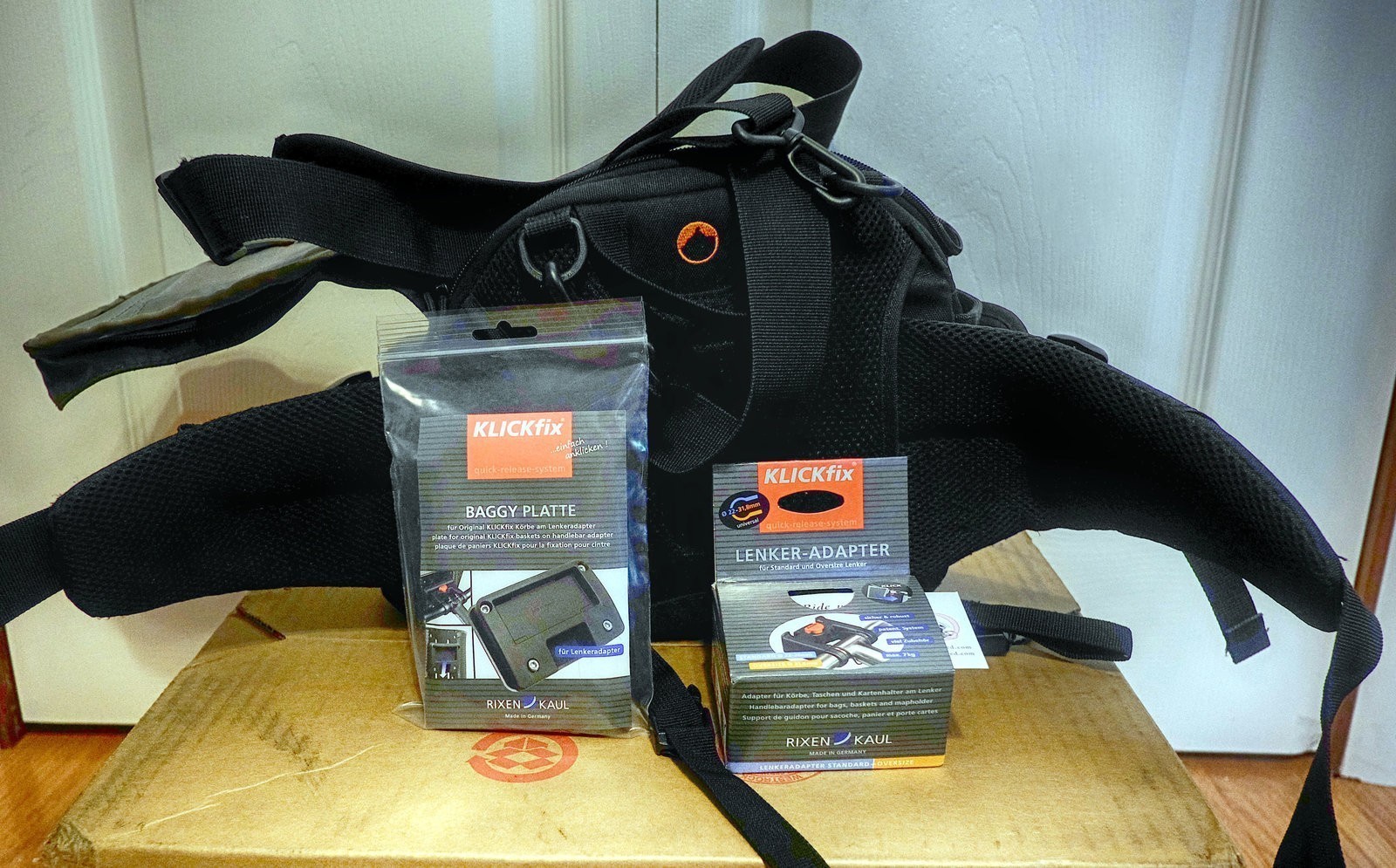 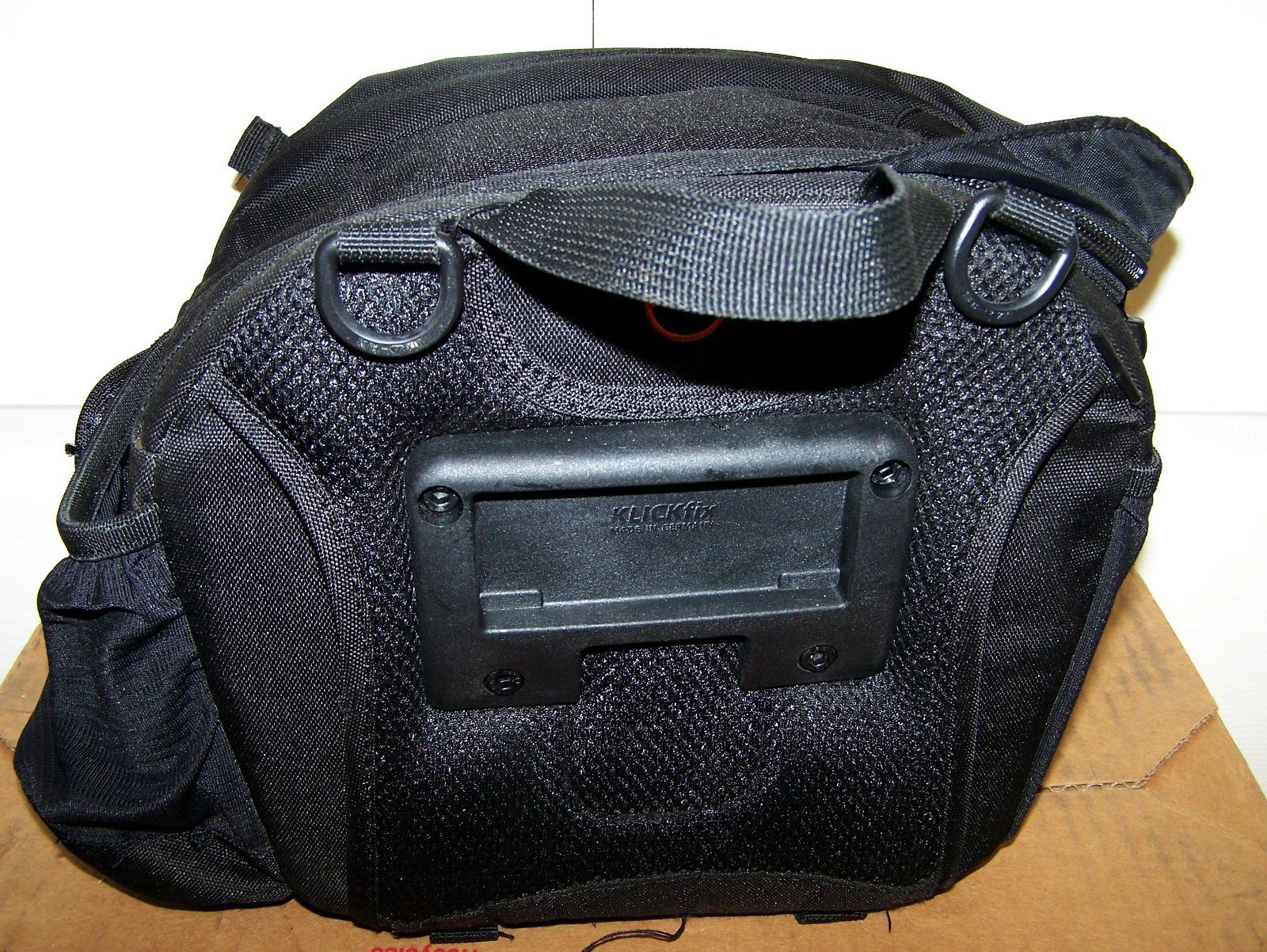 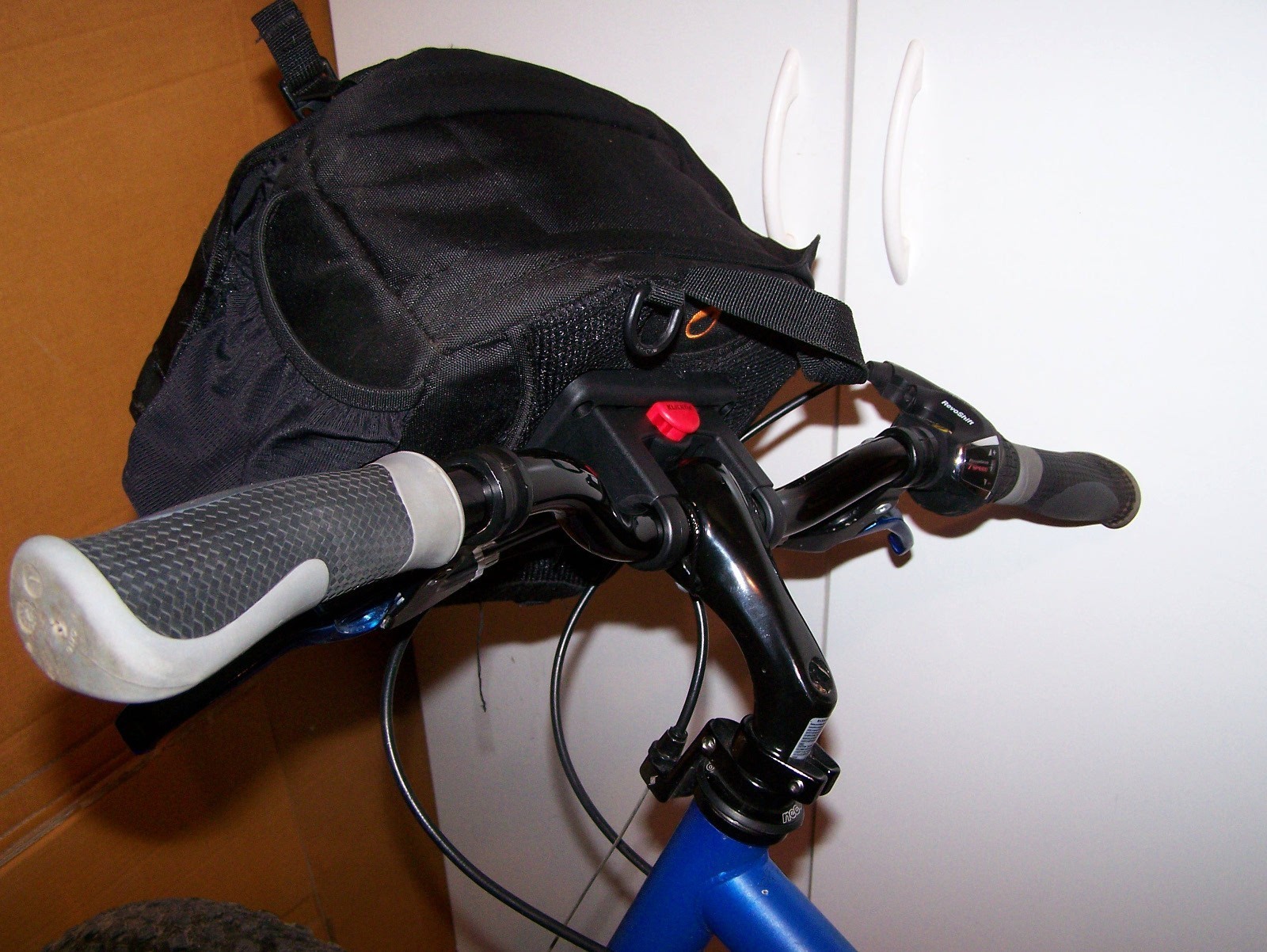 Ohhhhh man I iwsh I had done that years ago. I've gotten by using two canopy bungees, which let me attach / detach in about 20 seconds. But that'a what I actually WANT.

Nice build up and nice bike. Great description, and images of how you brought this all together. I have never ridden a fat bike but they look like a lot of fun, and practical for a photographer. I backpack my gear on the mountain bike and love it. It opens up a lot of areas to far to walk in a day.

KillRamsey said:
Ohhhhh man I iwsh I had done that years ago. I've gotten by using two canopy bungees, which let me attach / detach in about 20 seconds. But that'a what I actually WANT.
Click to expand...

You can get their bags with the adapter already installed. If I hadn't already had a bag laying around, something like this with a camera insert would be ideal:


Tim Williams said:
Nice build up and nice bike. Great description, and images of how you brought this all together. I have never ridden a fat bike but they look like a lot of fun, and practical for a photographer. I backpack my gear on the mountain bike and love it. It opens up a lot of areas to far to walk in a day.
Click to expand...

Thanks Tim. The bike is a lot of fun to ride, and the big tires roll really well on rough terrain. The ride I've planned this weekend is over some of the roughest terrain WV has to offer. It will involve some stretches of pushing the bike up steep hills, but that's all part of the fun.

I will say riding this bike regularly has made a huge difference in my strength and stamina. I was hiking a few weeks ago on a remote trail I hadn't been on in a while. It involves climbing through a long hollow up a steep, winding trail. When I got to the top, I thought to myself "I don't remember that stretch of trail being so short." I used to have to stop and take a break when I was climbing that trail. Not now.

^ It happens slowly and quietly, but it happens. Hits me too. "Huh .... I thought this was farher away."

I'll check out that bag.

The new handlebar rig worked well on my ride today. Here we are taking a breather in the midst of riding a bit over 20 miles on some rugged forest trails. Mountain biking for 20 miles in a day is a lot different than a 20 mile ride along a river, and I'm quite sore this evening. Scenery was beautiful, and the public lands where I was riding are just delightful in the Autumn. The bag and mount held up well to the day's beating, and those big tires work wonders on rough forest trails. XF 60 on the X-T1. 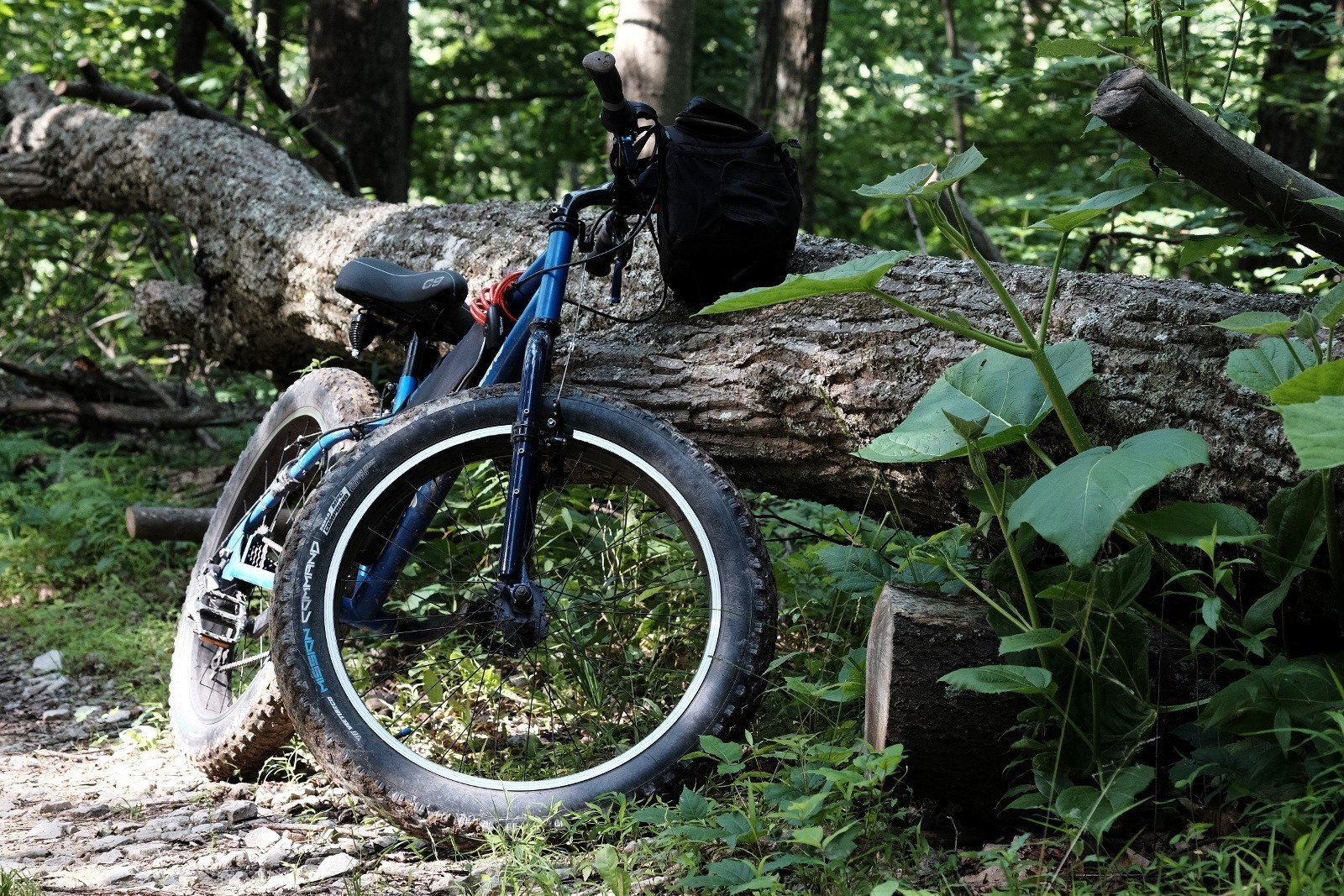 YES! That's a nice, serious outing. You're more or less a "bikepacker" at this point. You just need to affix a tent and sleeping bag to 'er.

Loaded up the bar bag with the X30 and a couple of film cameras, then went for a long bike ride along the Cherry and Gauley Rivers in central WV today, along the Cranberry Tri-River Rail Trail. 24.4 miles from Holcomb to Allingdale and back. Absolutely beautiful day for it. Loads of things blooming all over, including the state flower, Great Rhododendron. Check out the debris on the abandoned RR trestle over the Gauley at Allingdale where I was taking a break before returning. When our shallow mountain streams get deep, they get *deep*. 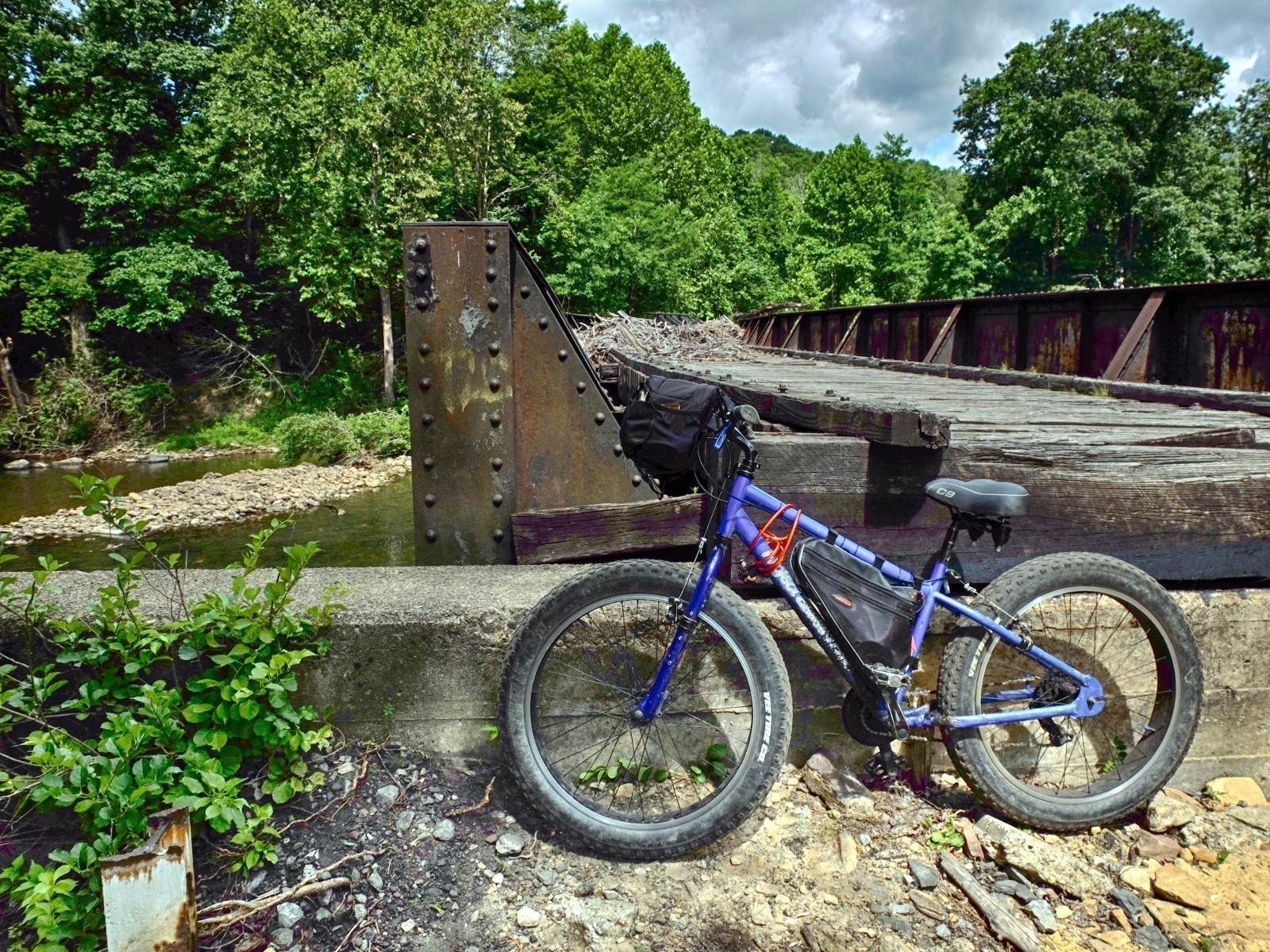 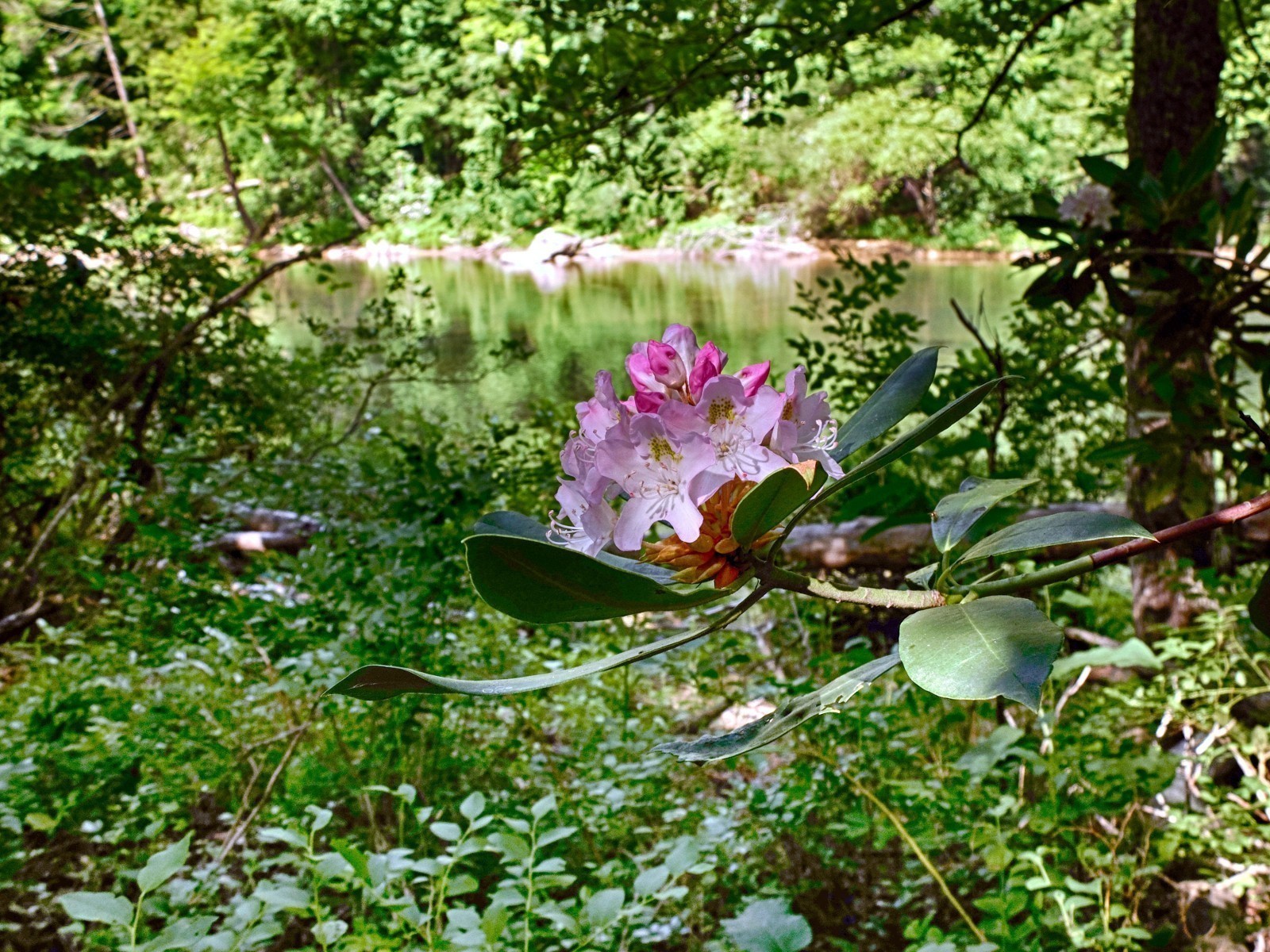 Back again after another run on a stream-side trail this July 4, along the old railway bed that follows Paint Creek in Fayette County, WV. Rode almost 9 miles, spending about as much time off the bike exploring around the creeks and waterfalls as I did riding. The X30 doing its thing. 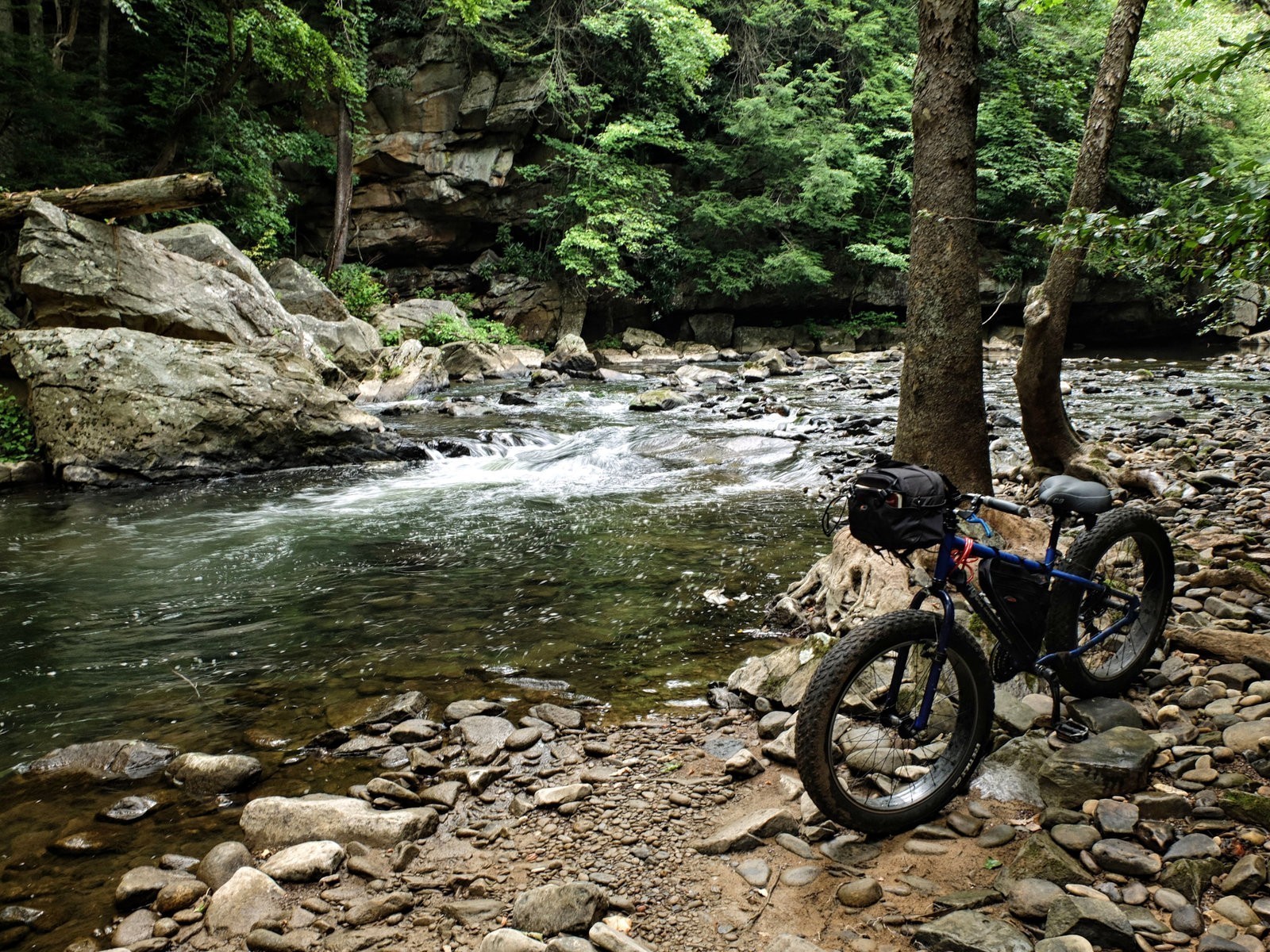 Taking a break on a hot and humid day. Even in the shade it was sticky. I was on a long stretch of trail that went over the top of a cliff line. I took a peek over the edge, and it was a long way down! You can bet I was walking the bike instead of riding it, especially since some of the trail was narrow and steep. X-T1 + 23mm WR. 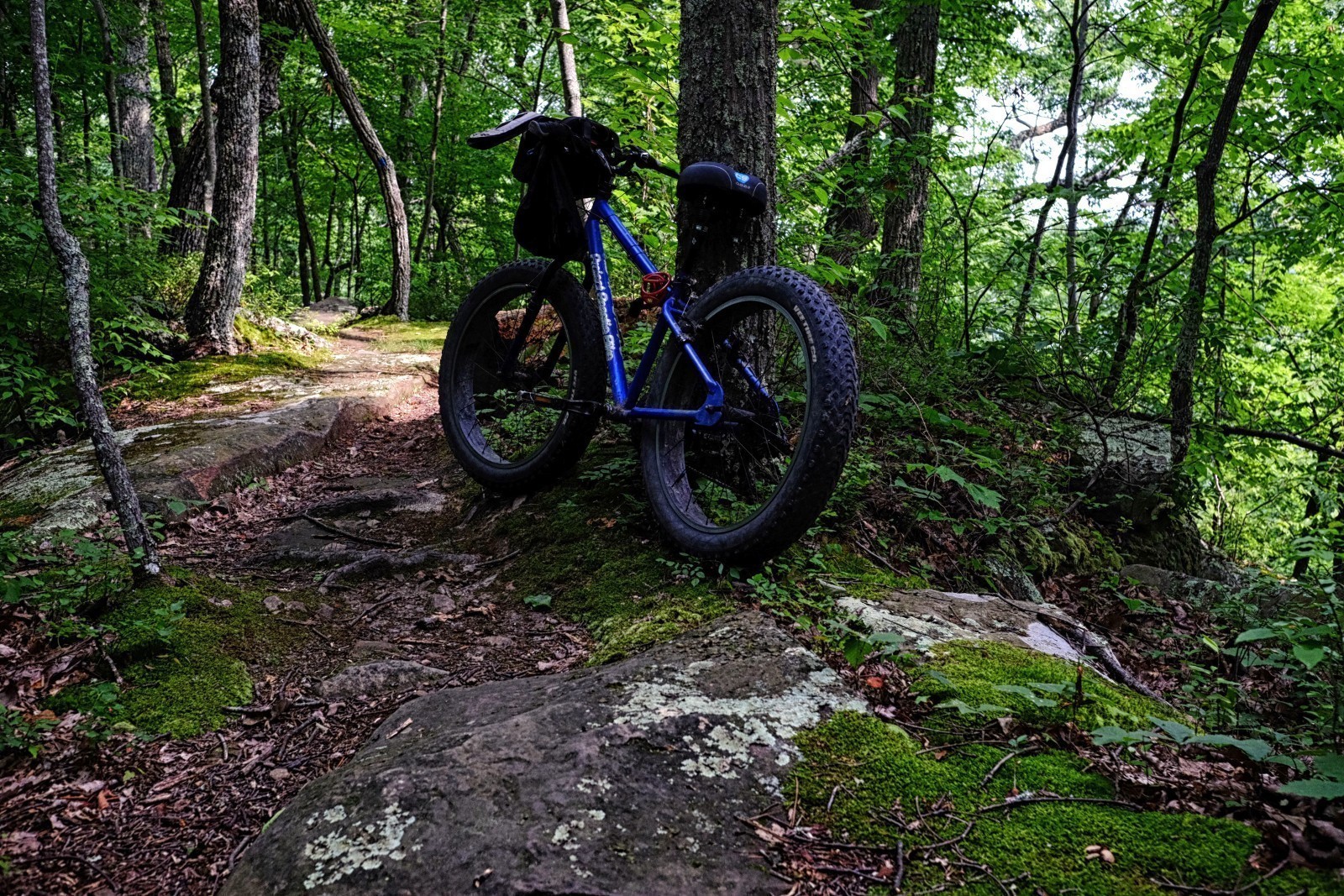 Tony I just ordered some bits and pieces for the mountain bike I got from a coworker. He's a higherup guy, we get along well and work together a lot. Only a few years older than me, but he's an accomplished cyclocross / road / mtb biker. He races, he's been sponsored, that sorta guy. Garage full of carbon fiber. One day 4 or 5 months ago, I was telling him this daydream I had of taking an aluminum framed 90's era mountain bike that has some rack mounting points on it (these became intensely uncool in the mid-90s and have only recently begun to be hip again), putting a better front shock on it, and disc brakes at least up front, possibly front and rear. I wanted to make a very lightweight bike I could bike pack on, commute on, and go hit the trails around here too. He grinned and said he had this late 90's GaRY Fisher in his garage he wanted to get rid of, and that he'd bring it in sometime.

Months passed. I didn't pester him about it. Then one day 2 weeks ago, this Fisher Mt Tam appeared in the lobby where we all park our bikes. It had no pedals on the cranks. It had an upgraded Marzocchi shock, and had been converted to disc brakes front and rear with braded steel lines and GOOD components. It had a carbon fiber handlbar... expensive german race tires. "This HAS to be his bike" I thought. But I couldn't find him. Went home for lunch, grabbed a spare set of pedals and a wrench, came back, popped them on, adjusted the seat down, and was HOOKED. It's so, so light. Turns out yes, that was his bike, and yes he wanted me to do exactly what I did. "Just take it home, we'll figure a price you can't refuse next week." At some point, he's got to tell me what I owe him, but so far nada.

Meanwhile I ordered a VO Postino handlebar with some nice sweep to it, and a rear rack that works with discs, and a Axiom Barkeep 9 front bar bag. Those bar bags were what was on the rental bikes we used to cover the 350-ish miles out in east Oregon a few months back, and I was absolutely smitten with it. It fit more than just my camera bag, plus has an insulated bottle (cough-BEER CAN-cough) holder on one side, is atiff and light, clicks off easily, and comes with a rain cover. Super excited, pics to come.

Sounds awesome, Kyle. The antithesis of PBB. My fat bike is about as primitive as a bike gets and still have gears, and it is *heavy*. However, I've had a lot of fun riding it, and it has helped me to significantly build up my strength and stamina over the past year.

Coming from the steel 3 speed 45-pound city bike I rode daily for 7 years, and which I rode here this first year til it killed the rear wheel bearings, this thing is a feather. And yet it's still at least 30 pounds, probably 35. Those tiny carbon road bikes are more like 22.

I wish I worked at a place where biking was part of the culture. Unfortunately, I work on top of a mountain, and commuting by car is essential. There's 20 miles of heavy interstate traffic to navigate, and once I exit the highway, another 3 miles and two very long and steep climbs. I have seen people peddling up one of the big climbs, but they have to gear way down, and I'd bet pushing the bike would be faster.

I wouldn't bike a quarter mile of interstate. And I'm "one of those crazy bike commuters." Cellphone distraction has changed everything, and that speed differential (80mph vs maybe 10) is just too scary -- it defeats any of the enjoyment.

KillRamsey said:
I wouldn't bike a quarter mile of interstate. And I'm "one of those crazy bike commuters." Cellphone distraction has changed everything, and that speed differential (80mph vs maybe 10) is just too scary -- it defeats any of the enjoyment.
Click to expand...

There is a secondary highway that used to be the primary thoroughfare through the area before the interstate was built, and it mostly flows in the same direction. Several years ago, the state paid $3 million to create a "bike lane" on each side of that highway - as if painted lines will stop an errant vehicle. No way I'd ever use that, either, but I've seen a few bikers using it. Nuts.