I need to replace the felt on my collapsible Summicron f2, because the lens is very hard to push/pull and twist (I twist the lens off my camera if I need to collapse it). Also, this tightness seem to interfere with the focus-action as well, somehow, I am not sure, it may all be in my head

Two questions:
- How the heck were the Germans able to get the felt in there to begin with? (it's too thick for the inner-tube and the fitting is so tight, the lens is very hard to deal with)
- I am thinking about replacing the felt with the light-trap from a 35mm canister (need to check thickness first). Are there other materials more suitable for replacement?

If this a non-technical forum where such a question doesn't belong, feel free to delete this post.

Did you take any pictures of the tear-down? If so, posting them would help.

I relubed a Thread Mount Summicron a few years ago, someone had cured it of yellowing by leaving in sunlight- but dried out the lubricants in the process. That was a very easy job, three screws in the back to reveal the helical. I did not have to remove the optics barrel.

I will need to tear it down again anyway, so I will take some snaps of the process as I do that.
For reference:

Mine is very similar to the summitar here Repair: Leica Summitar
But the article has few photos.

Here is the procedure on a Summicron M, not LTM , mine needs a different disassembly, but the innards of the helical seems quite similar.

Thanks for the reply, I will update with some photos, as soon as I do the procedure again (most likely during this weekend, it's been a bit busy these past few days)

Moderator
The Summitar and LTM Summicron are the same around the helicals. The M-Mount is not as obvious.

Yeah, I am glad I didn't have to go into the helical from the front on this lens, the front (which is taken off by using a rubber-pad in the video) on mine is tight as a <insert funny analogy here>

By the way, about curing the yellowing, I found an interesting thread here (seems you found it as well, back in the day): Fastest Tool to clear yellowed Thorium lenses - Rangefinderforum.com

A simple Ikea-lamp can cure it, I plan to buy one, since I have two Ikea-stores within 20 minutes here, will leave it in for 24h hours and check, then possibly longer, need to check the heat as well, so the lens isn't baking under it JANSJÖ LED vegg-/klemmespot - kobberfarget - IKEA
Last edited by a moderator: Jan 13, 2017

Moderator
I used a UV lamp, must be UV-B and UV-A. UV-C is deeper, and probably does not penetrate deep enough into the glass to be effective.

The Ikea lamps- seem to be based on specific models, I've read that some people did not have any luck.

Moderator
I took apart a 3.5" Floppy diskette that had gone bad: the material used to line the diskette might be a good candidate to felt replacement. Made to allow the flexible diskette to spin in the plastic case.

Neat! (I wonder if I still have my old disks, I used to have a ton, but I think I have thrown them all away during the 2000's, I need to check).

As promised, here are some photos of the disassembly of the (my) lens:
It may be different from other versions, as far as I know from googling.

Anyway:
(please note, the photos are from various times and settings, as I have been working on the lens for about 1.5 weeks, also cleaning and re-assembling the 10-blade aperture). 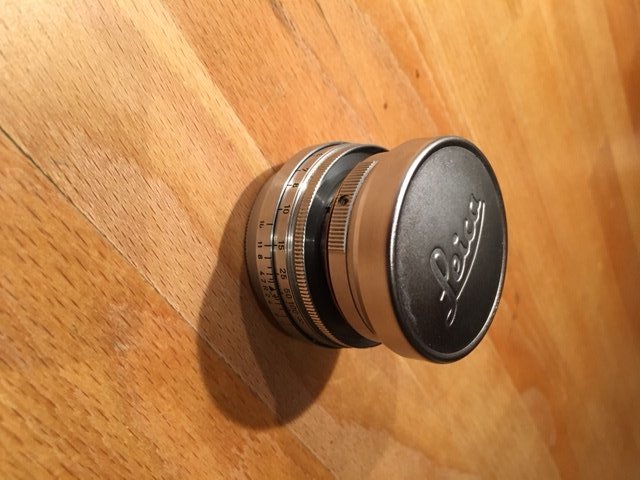 The full lens, how it looks fully assembled. Mine is serial 1009093 and contains Thorium-coatings, which makes it slightly radioactive and a little yellow, I plan to mend that with a UV-source. 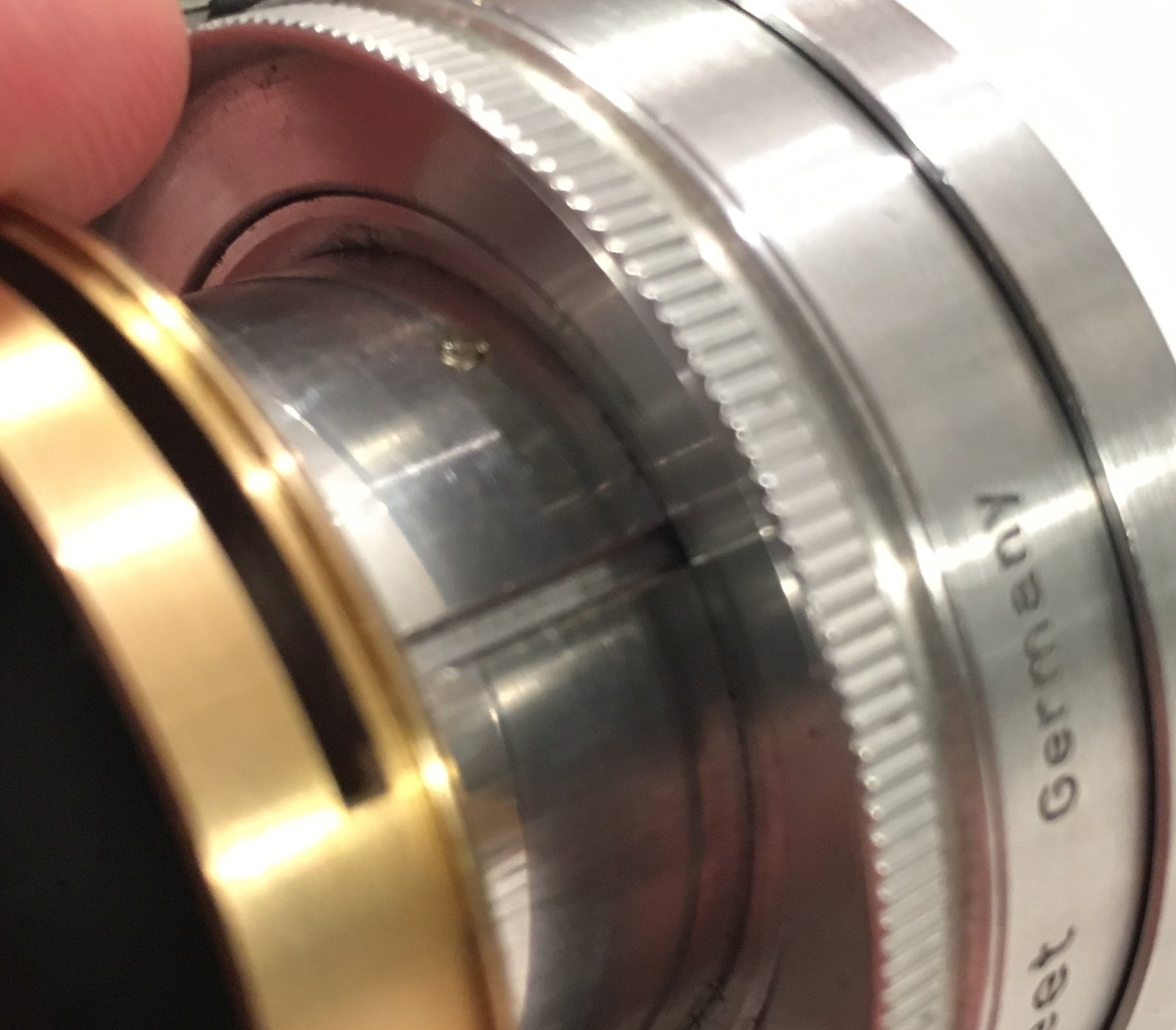 (Very bad) Photo, showing the location of the set-screw on mine, it's tiny, looks like the screws you would see in and around Jupiter-lenses. It sits very low when fully extended and is hidden when collapsed, so one needs to unscrew that at a slight angle (at least with my micro-screwdriver-set).
After you have removed this screw, you can actually unscrew and remove the optical block if you want. 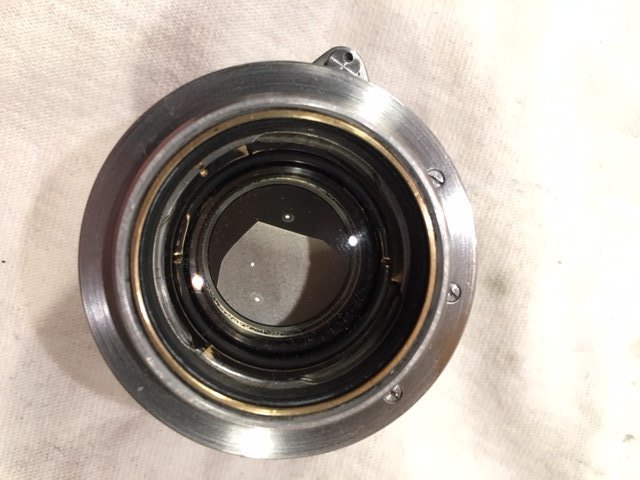 The retaining-ring, holding the optical block to the focus-helical. (it's a little scratched, due to my wrench slipping the first time, as it was set very hard).

The retaining-ring has two sets of threads, one for the helical and one that screws into the lower part of the optical block (between the glass and the outer-barrel).

That is why you can unscrew the optical block once you have the set-screw out.

Just a cautionary note that I have found;
The retaining-ring that holds the optical block, also is responsible for putting the optical-block at a certain distance to the film-plane.
That means, if you are sloppy getting it back in, you may shift the focus-plane backwards or forwards.
Take note as to where the retaining ring is set before removing it (it is actually possible to screw it completely trough the focusing-block if you don't have the optical-block inserted, thus, it is important to know where it was set to begin with,to avoid the hassle of adjusting the focus after assembly).

In my case, I simply had to loosen the set-screw, unscrew the optical block a little, then tighten the retaining ring one additional round, then set the set-screw again and all was dandy.

Just be aware of this, it's not hard to adjust the focus after assembly, just a little tedious ^^ 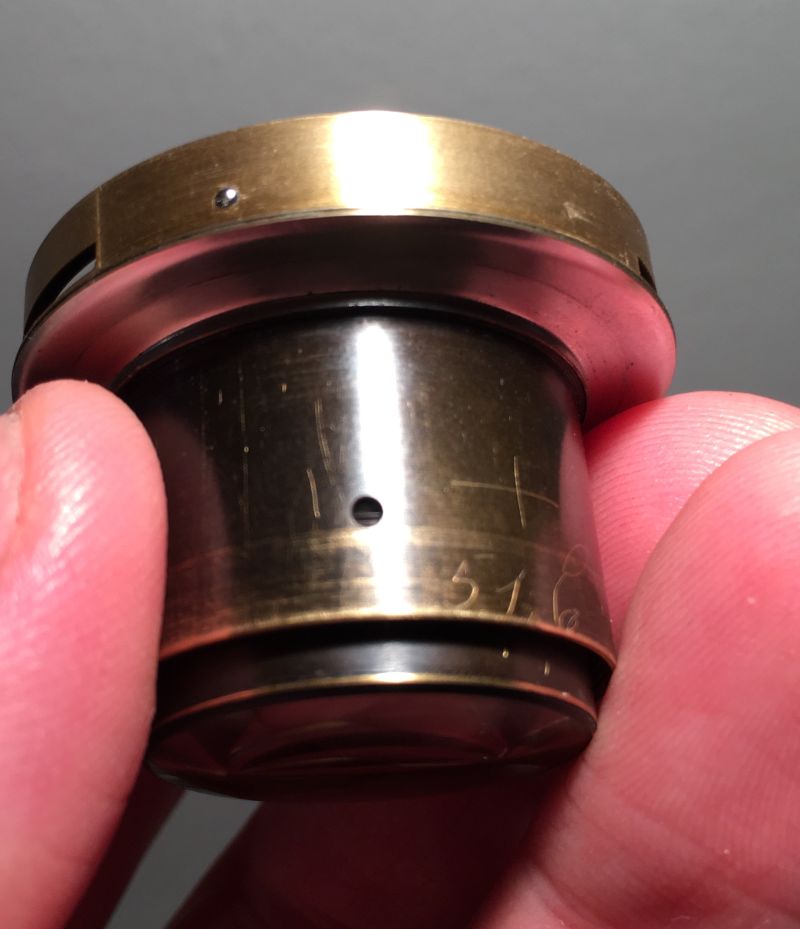 Photo, showing the lower part of the optical-block. The retaining ring you mess around with on the back of the helical, goes in between the glass and the barrel at the bottom here.

Also, when assembling the lens again, I found that it was best to insert the retaining ring at the rear, enter it and screw it almost all the way in and then insert the optical-block, screwing it into place.
The final step, is aligning the hole and tightening the ring from the rear of the lens.
I found that the ring is hard to insert/would not engage the optical-bock properly if you try to screw the whole thing together from the rear. Optical block, free from the helical, the helical has the inner-tube attached.
If/when you slide it out, keep your fingertips over the ball-bearing nipples (see below), to prevent them from dislodging/jumping out.
The ball-bearings sits in the grooves that you see on that barrel and is responsible for guiding the lens when you pull out and twist. 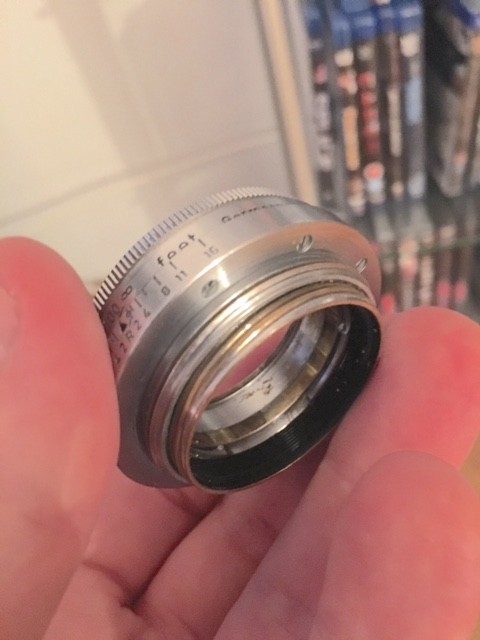 This image just shows the inner-side of the ring, after I removed the annoyingly tight felt. 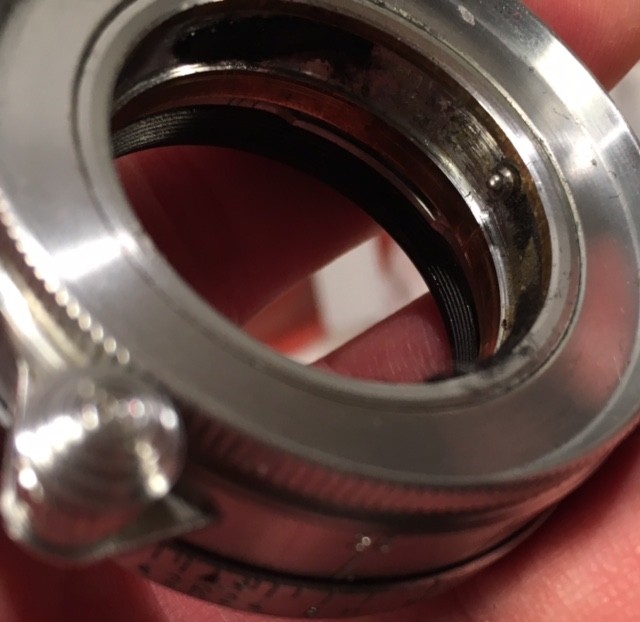 Here is the nipple with the ball-bearing. The nipple itself is hollow and contains a tiny spring. The casing is magnetic and holds the ball-bearing in place, but be careful when you remove the inner-tube, as these guys can jump out or simply shoot the ball-bearing out like a gun, good luck finding it again.
The blurry top-lid shown here would not come off on my lens at all, so I had to go in from the back. (see below)
Also, just visible, some felt-patches here and there was re-inserted to give some friction, this works pretty well, but it also says how much felt i had to remove, for the lens to be usable and twistable. 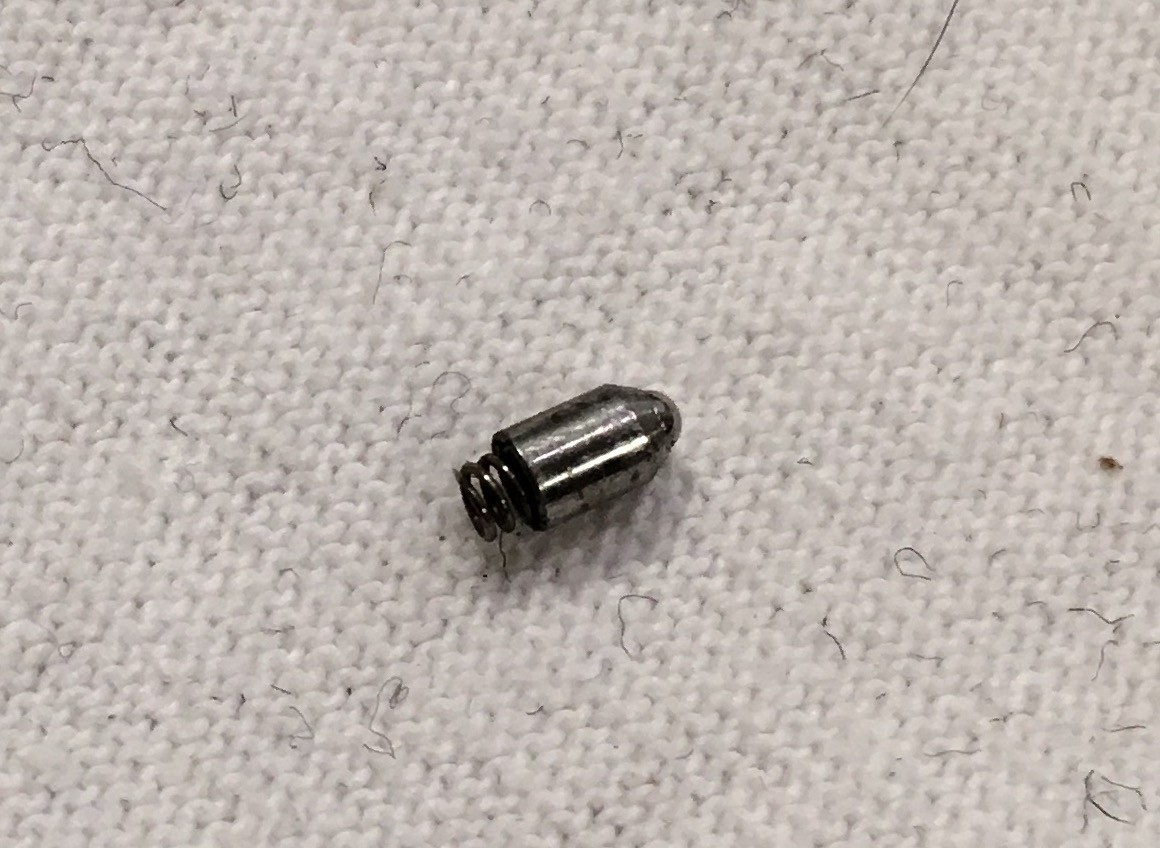 Here, I have taken out one of the nipples, it is super-tiny, about the same size as a pen-tip with the ball, I am sure you could write with it if you inserted it into a pen 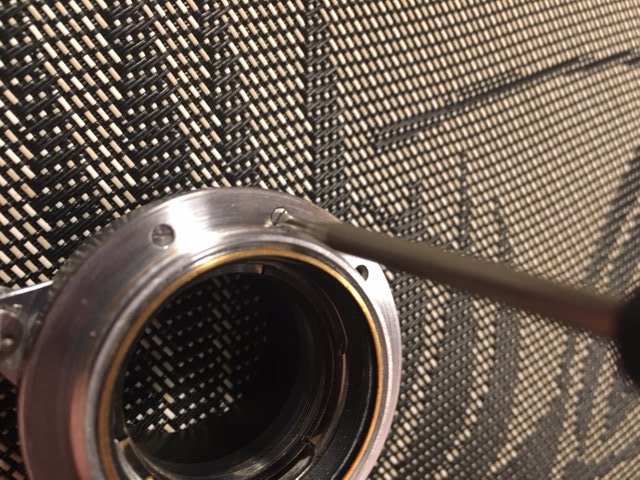 Bottom-end of the focusing helical has three screws on my lens, here I am in the process of taking them out to clean the helical-threads. 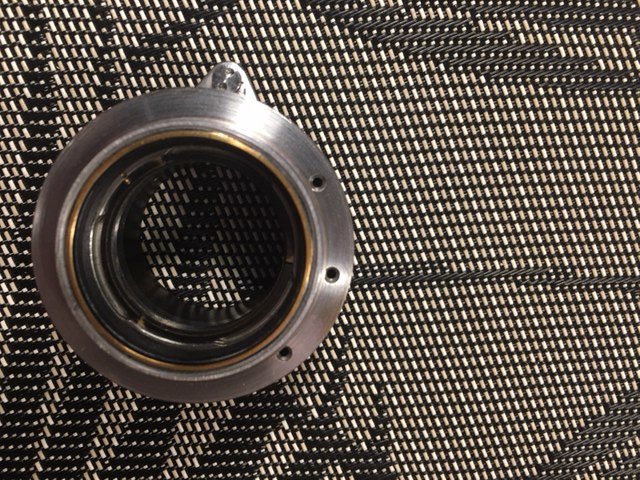 All screws are out, now I can simply unscrew these parts now, to get to the helical-threads.
IMPORTANT: Take note on where the two parts separate, or you will spend an absurd amount of time, getting it back together again. 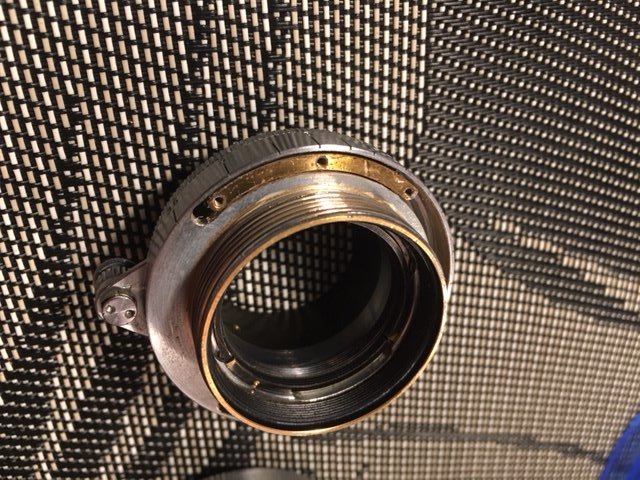 Here is the main-part of the helical. I have found that the yellow-part also needed cleaning, but it was not possible to get it completely out from this side.
The yellow-part is the focus-stop mechanism and thus follow the rotation when you focus. The block with the 3 screw-holes can actually be raised up and down, it tracks and follow the distance created by focusing back and fourth.

I ended up flushing this chamber with the yellow-part several times with electronic-cleaner, as well as taking out the aforementioned ball-bearing nipples and spraying a LOT of electronic cleaner in there as well, while working the yellow part back and fourth with a small screwdriver. My first attempts of cleaning, was unsuccessful, and the grit here, prevented proper, smooth focusing.

Later, I gushed in high-pressure grease, both in and around the yellow block, but also from the inside (the black part below the inner-threads is a part of this yellow thing and moves) and also into the ball-bearing holes, while working the lens.

The outer ring seemed to like a thicker kind of grease, here I used a slightly thicker Lithium-grease meant for bikes. It was too thick for the helicals on my Jupiter-lenses but works perfectly on this lens and makes it smooth as butter. 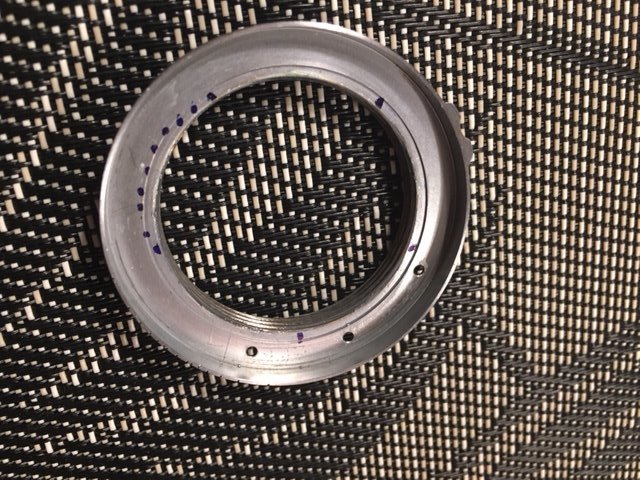 The very back-end of the lens (that goes into the camera). The inner-threads are the ones that are a part of the helical. On my lens, under great magnification, these inner-threads showed pitting/corrosion. It does not seem to interfere with the helical or focusing operation though.....the markings is me locating the starting points (5 in total) of the threads. (since I took it apart without noticing where they parted the first time, I now know that it parts when the infinity-mark is between 10 and 15 feet )

I did a write-up on how I did the blades on APUG, here: Trick to assemble collapsible Summicron aperture?
Last edited by a moderator: Jan 21, 2017

Moderator
These are a great help to anyone working on a Summicron!

I've made this thread a "Sticky" to easily find it.

That's very cool, I hope it helps someone out in the future. Some of this info is really hard to find (if at all) and experimenting with expensive stuff is rarely a good idea

Is there any material that would be best to replace one that has also gone stiff? I fear this is not just about dampening and operation. The felt also probably plays a key role in keeping light out of the collapsible lens when making pictures and especially worried in bright sunlight.