I looked at the test photos shown here earlier and realized that lower ISO 80 on RX100 vs ISO 100 on RX100 M2 at same exposure.
Based on that EXIF data, we can't really say that RX100 M2 is a wash out. It is really shot at different exposure so it is not a good comparison. When shuts are over exposed by 1/3 to 1/2 stop, it will look less saturated and DR for sure.

wt21 said:
Based on what I reviewed in the comparometer, it seems IQ differences are thus:

In JPG, the mkII has a much improved jpg engine getting out 11EVs in low ISO, whereas the mkI could only get out 9. That's a marked improvement, as I've been forced to shoot RAW in bright light, so I could get some of that headroom out.

In terms of clean ISO, the mkII is much better at high ISO than the mkI. That's marginally useful to me, as I generally shoot in good light. I'd say only 10% of my shots come at ISO1600 or higher.

However, the MKII takes a step backwards in low ISO, with ISO100 being far less cleaner, and therefore a little less sharp, and I think 200 is also weaker, or maybe just even with the mkI.

Then the other trade off is tilty screen, wifi and hotshoe (mkII) vs. smaller, lighter and cheaper (mkI)
Click to expand...

Has anyone actually seen this new camera in real life yet? I know according to B&H it should be shipping on 7/26.
G

When I picked up my 100 a week ago I asked and was told only 6 arrived into the whole of Australia.
That it will be another 6-8 weeks before we see it in shops in Melbourne if we're lucky.
Which is partly why I chose to stay with the first model.


Irene,
Have camera will travel & shoot!

Thanks for this info, Irene.

Amazon here in the states already says that orders exceed their first allotment and some people will have to wait.

I'd like to compare this camera in size to the Fuji X10... Now where is that camera size comparison site... I'll have to go look around for it! 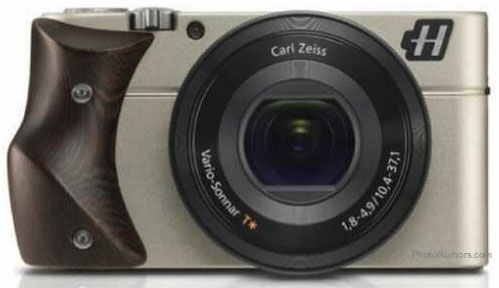 Those are the first leaked images of the upcoming Hasselblad Stellar compact camera. Similar to the Lunar, the Stellar will be based on the Sony RX100 model. The major difference compared to the RX100 seems to be the Italian wood handgrip and camera housing material. The official announcement will be on July 26th. The price is expected to be between $1,600-$3,200 depending on the selected materials. At least six different grips, mainly made out of exotic wood, will be available.
Click to expand...

... and so the sadness continues...
I wonder how well the Lunar is selling
L

In some markets, like Canada, the M2 shipped a while ago. The US is lower on the delivery schedule now for some reason.

Here's another user sample of the IQ. There's a pattern setting up. The M2 has lower IQ at low ISO than the classic. It's high ISO IQ is better. It maybe simply that LR4/LR5 isn't setup with a proper M2 profile.

I just played with one today at my local Sony store. So the Sony stores have them in stock. Love the tilt screen.
J

lenshoarder said:
I just played with one today at my local Sony store. So the Sony stores have them in stock. Love the tilt screen.
Click to expand...

Are you in the States?
L

jglasson said:
Are you in the States?
Click to expand...

I don't know why but I think lenshoarder is in the UK...but I could be wrong.

I've become kind of obsessed with the tilt screen concept, myself.

I have no idea how I could have missed this from you, lenshoarder.

I checked my local Sony store in Palo Alto, CA today and they have not gotten the cameras in stock yet. They claim that they will have them on 7/26. I put my name down (#14 on the wait list). If they get it before I leave for my trip on Sunday, I'll pick it up; otherwise I'll wait and order it from B&H to save the sales tax. They did have one to play with and it's a but thicker than the older rx100, but that pivot screen is nice!
J

I'm really on the fence about the screen. It's probably the only new physical feature I'd use, and even though it's just a couple of millimeters, I wonder if it'd be enough to make the camera feel shirt pocket un-friendly, which for me is the genius of the RX100...
M

wolfie said:
Because a real serious compact should have some sort of VF ...

Frankly I was hoping for the same sensor with a more versatile lens (with a range like the G15) in a slightly bigger body.
Click to expand...

A bit more optical zoom would be nice.... 3.6 is not bad considering all the other amazing bits and bobs and it's not a 'point nd shoot' per se, I guess. I like the AF speed, and the low-light abilities... I'll have to repost after I receive it! I bought the RX1/R as well - no zoom there, but I'm pretty excited about it's low-light abilities too, will have to see if it's worth the lack of zoom - I know, heathen here. Anyway - I read this summary of the camera: Sony RX Series Cameras: Sony RX100M II and Sony RX1/R Price, Review and you know you want one. and like the idea of using my phone as a remote with the wifi on the RX100m ii. PRetty awesome really.
L

Anyone looking to buy this, Rakuten is giving back 30% in Rakuten points. Those points have to be spent at Rakuten within 60 days but it's worth over $200 if you buy the RX100M2 there. So if you are planning to buy something else too, it's not a bad way to go. If the GX1 comes back for $199, think of it as buying a RX100M2 and getting a bonus GX1 body for free.
You must log in or register to reply here.
Share:
Facebook Twitter Reddit Pinterest Tumblr WhatsApp Email Link