Having looked at the performance of the Samsung EX1 versus that of the Panasonic LX3 at wide angle, lets see how the two perform at 60mm equivalent, which is the longest setting on the Panasonic (the Samsung goes to 72mm equivalent). Please refer to the 24mm equivalent comparison for the details of the methods used in this shootout.

Before looking at 100% crops, it's worth looking at the resized images to get a sense of the distortion: As you can see, the version of Silkypix which ships with the EX1 leaves significant pincushion distortion uncorrected at telephoto. This is something to keep in mind while viewing the following crops since subsequent correction of the distortion would remove some of the detail from the EX1 crops.

In each comparison, I chose the EX1 aperture which most closely matches the LX3 aperture, beginning with f/2.8 on both cameras, center crop: 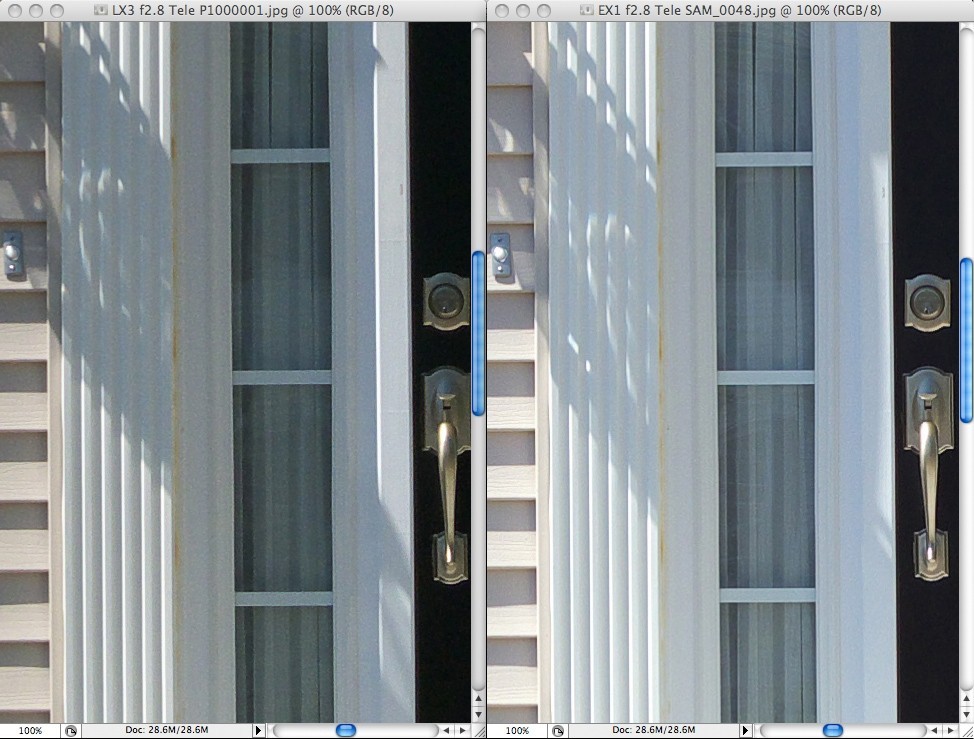 In the short tele range, both lenses again show excellent performance in the center, even with the lenses wide open. Other than the apparent distortion, the EX1 Schneider lens is superior on the upper left. As we saw in the wide angle comparison, the Schneider falls apart in the bottom right corner when used wide open. The bottom left corner speaks for itself. 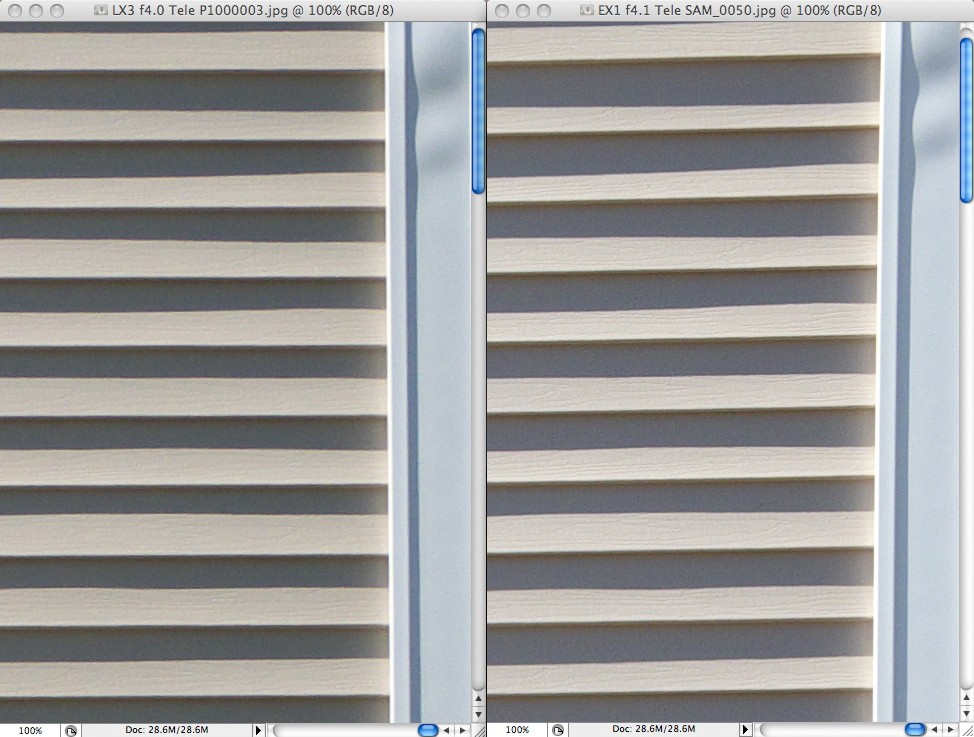 Conclusion: The Summicron is no slouch, but the Varioplan has it outclassed in the telephoto range.

The same caveats apply as in the wide angle shootout.


Special thanks to B&H for loaning both of these cameras for testing. If you're interested in either of these cameras, you can support this blog (and our ability to get gear to test) by buying using these links:

RAW files from this shootout were accidentally erased

. I am trying to recover them from the SD card and will post them if possible.
D

Good report. I don't understand why it seems with these sorts of cameras that there is always decentering or for all we know, mis-figures in the lenses. I mean, if all corners of a frame had equal amounts of blurr, its easy just to say its the design of the lens. But with this, it appears to be either manufacturing issues of the actual lens or issues when the lenses are put together. Its almost like they have no QC when it comes to verifying these lenses. The other culprit is that there is a lot of slop in the lens causing the lens to be off center from the sensor.

Thanks Dj. Decentering is common with SLR and MILC lenses as well. Here are some examples from SLR Gear (look at the blur index figures):

I assume it's a matter of QC. If they couldn't sell lenses with decentering, we'd likely be paying far more for these lenses.
D

I guess what I don't understand is what exactly is lens decentering.

When a simple two or 3 lens element objective telescope, the actual figure of the lens can easily be tested. The figure is independent of the alignment of the entire optical path. Once the objective is put into a telescope, the optical path has to be alligned or "collimated". If it isn't, abberitions can result at the image plane, if say being used for astrophotography.

I guess what we really don't know in these complex lens designs for cameras, is what the actual optical figure is like of the lens elements or lens groups. When we see these "decentering" issues, we have no real idea what the culprit is, whether its specifically the quality of the individual lens elements, mis-alignment of the lens groups, or just entire lens shift on the image plane.

I guess more importantly, I wonder if a little more time and care was used how sharp the image could be across the entire frame if it is soley alignment issues.

Hi Dj, you're talking out of my league now . I don't know the real reason for this, only that it is common to refer to "decentering" when a lens produces asymmetric results on a camera.
D

They seem to think its an alignment issue. This to me is something that should be easily fixed during manufacturing.