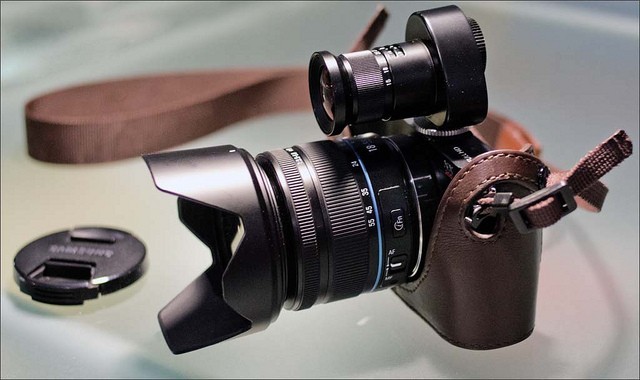 Inspired originally by stratokasters review to try one of these out, I have just completed a monster 15-part personal review and user experience report on the Samsung NX200.

Due to the nature of blog layouts its back to front unfortunately, and its quite a marathon with samples, videos and comparison tests with other cameras. I've been processing the raw files in Capture One and though Photoshop and Lightroom have just released a new ACR update which supports it, I've tried that out but see no reason to change anything, since Capture One does a pretty similar and excellent job of getting the detail out.

It is a "rolling review" and there are a few glitches, mistakes and changes of mind over the 10 days that I was compiling this (So whats new!!) But thats part of the charm (really!!)

If you want the quick version:-
Great sensor - shame it hasn't got a viewfinder.

You know, your experience documented in your blog is raising the voices of GAS in my head..
S

Alf said:
You know, your experience documented in your blog is raising the voices of GAS in my head..
Click to expand...

Well as EU residents we need to stimulate growth!!

We all need growth - well, maybe not individually.

I look forward to catching up with your reviews after I've locked away my wallet.

I've been reading bits and pieces from your Samsung blog over the last few days. I'm hoping that they will come up with something even better with a viewfinder or at least the option!
S

christilou said:
I've been reading bits and pieces from your Samsung blog over the last few days. I'm hoping that they will come up with something even better with a viewfinder or at least the option!
Click to expand...

Yes its the one glaring omission. You'll probably know I've been making a big thing of it. It seems such a shame that they couldn't even offer an add-on.
R

Thanks for this very interesting and thourough review. VF aside, the NX200 looks like an impressive performer. The 16mm and 30mm pancakes got great reviews and I read that a 55mm f1,8 pancake is in the works. I had the opportunity to play with a NX200 with 30mm recently and thought it handles better than an EP3 and fits comfortably into a jacket pocket, something only a Leica X1 does among the other aps-c sensor offerings.
Samsung got the sensor and the pancakes, Sony the EVF, mft the best lens lineup, it seems there is hope for the next generation of high end small cameras.
G

Thanks, I've been reading your review as each part went up. The Samsung has the lens lineup I wish that Sony had, which makes it really tempting. I have a decent investment in m4/3 glass right now though, so switching would have to be worth it. Meanwhile, the GX1 and G3 are tempting me with their usability improvements over my GF1, but seem just barely better in terms of image quality. Decisions, decisions.
E

soundimageplus said:
Yes its the one glaring omission. You'll probably know I've been making a big thing of it. It seems such a shame that they couldn't even offer an add-on.
Click to expand...

Greetings,
I read most of the 16-part review, too, and noticed that you actually liked the IQ and the fact that it apparently has quite a weak low pass filter but, I couldn't help noticing the bitching and moaning about the lack of viewfinder. For a good reason, though, and which is probably the main reason why I haven't bought this camera yet.
Looks like you tried to overcome the problem with a Voigtländer OVF, but did you ever try, or even consider using a LCD loupe? You know, something á la Hoodman, or even Zacuto Z-finder Jr? I know it might look dorkier than the Voigtländer OVF but, wouldn't that be a feasible way to solve the no EVF problem? And if not, why?

The idea of getting this model still feels tempting. Especially now that the price of the NX200 has dropped to the same level with NEX-5N, probably because there are to be two or three new NX models coming later on this year (NX210, NX20, NX1000).
I've been thinking about either the NX200 or perhaps Ricoh GXR, both of which have either weak or no AA filtering (A16 & A12M modules).

Welcome to the forum Ernie!

I believe Dan a.k.a. "Country Parson" is selling his NX200. Not sure if he has sold it yet. Here's the link to his profile at SeriousCompacts.com: View Profile: Country Parson - Serious Compacts

My NX200 is for sale on Amazon and is set at the lowest price of one that is like new. I also have the 20mm and 30mm pancake lenses for sale. It is lightly used in original box with all the original stuff.
E

I believe Dan a.k.a. "Country Parson" is selling his NX200. Not sure if he has sold it yet. Here's the link to his profile at SeriousCompacts.com: View Profile: Country Parson - Serious Compacts
Click to expand...

Thanks, it nice to see some life on this forum, or at least more than over in the GXR forum.

Looks like he has indeed traded the NX200 for a new NEX-7, so he may not be checking out in this forum any longer. However, should there be anyone else with similar or at least some experience for the model, please feel free to share your findings. Or if you have tried the loupe as an EVF substitute with any similar CSC model.
E

Country Parson said:
My NX200 is for sale on Amazon and is set at the lowest price of one that is like new. I also have the 20mm and 30mm pancake lenses for sale. It is lightly used in original box with all the original stuff.
Click to expand...

I'm on the other side of the puddle, so at least the battery charger wouldn't work over here.
Anyway, what made you switch from the NX system to the NEX system?
After all, looks like the price vs. performance ratio of the NX lenses is currently better, and they're smaller, too. There are only two or maybe three decent native E-mount lenses at the moment, and one of them costs more than the NEX-7 body. That was one of the main reasons my attention shifted away from the NEX system over to the NX system. Another reason was the way too enginerdy UI of the NEX bodies. It's a matter of taste, for sure, but I just prefer the more traditional approach of, say, the NX and PEN systems.

The Samsung has a much better UI than any of the NEX cameras. This is improved considerably with the NEX7 and its three "dials" but the menu remains awkward. As for IQ I would say, without doing any pixel peeping, that the NEX7 and the NX200 are on a par with each other, and I like it that the NX200 offers some nice pancake lenses. But I prefer the articulating screen, the viewfinder (which I use very little, but when you need it, it's there) and the strong peaking function on the NEX 7. None of this is to detract at all from the fine quality of the NX200. Were I richer I would keep them all, but for me there are only so many systems I can afford to maintain. Not only that, but I think as a photographer I/we do better to master a few cameras, rather than try to use several.
E

Those sound like good enough reasons to go for either system. I have to agree on the presence of the viewfinder - that's probably the only reason I haven't already bought the NX200. That's why I started asking about the loupe option as an EVF substitute, and fishing for possible user experiences for one.
I also agree on the notion that had I more than enough money, I'd probably buy both an NX200 (or one of the forthcoming new models) and a Ricoh GXR with a couple of modules. But because of the limited budget and the fact that I only have two eyes and hands, I'll just settle for two different cameras. I already have a DSLR of a sort, and the NX200, should I ever get one, would most likely be equipped with one of the pancake primes, and used as a 'pocket camera' of a sort. Most of the time, anyway.

Ernie said:
Thanks, it nice to see some life on this forum, or at least more than over in the GXR forum.

Our resident GXR users seem to be on a hiatus. Don and Duane have not been around as of lately. Christina is selling hers. Kyle sold his.

Dan, did you use to have a GXR as well? I had one for about two weeks, and was using it with the M module.

I had a GXR, but sold it a few months ago. It is a fine camera.
E

Country Parson said:
I had a GXR, but sold it a few months ago. It is a fine camera.
Click to expand...

Heh, sounds like you've been there, and done it all. So that's why I'll bug you once more.
So what didn't work for you with the GXR, and made you trade it for the NEX? Just curious.

I take it that one obvious reason might be the price of the individual lens modules, but I wonder what else could make it a less than ideal choice. Looks like both the UI and the IQ of the GXR are pretty good, and there is an optional EVF, too.

I've seen some comparison shots between the GXR+M module and NEX-5N+M adapter with the same M lenses, and the GXR results looked better every time, even though the (Sony) sensor is only 12MP. Apparently because the GXR module has no AA filter. The NX200 apparently has one, but looks like it's weaker than, say, in the NEX-5n.

Ernie, it was the same reasons that I chose the NEX over the NX. The better peaking and the articulating screen, plus my expectation that investing in the NEX system was a good idea as I expected the NEX7 to remedy most of the NEX weaknesses, and it has to my satisfaction. But none of this is to say that the NEX is the best for everyone, or for every type of photography. I still prefer my DSLR for some types, especially fast action or longer telephoto work. For street and general people photography the NEX is great, and I expect the XP1 is as well. Ray is demonstrating that for us. The GXR, the NX200 and the NEX are all fine cameras in the APS sensor category. It all depends on personal preferences, shooting styles, and of course the wallet.
E

Country Parson said:
The GXR, the NX200 and the NEX are all fine cameras in the APS sensor category. It all depends on personal preferences, shooting styles, and of course the wallet.
Click to expand...

Yeap, that much I know, and it would be much easier (to choose) if they all weren't good in their own ways.
So that's why I try to pick up clues from other people's experiences, the kind of clues that might work for me, too. It's all very subjective, for sure. Thanks for the feedback so far.
BTW, speaking of screens and the NX models, according to some rumours, the new Samsung NX models are to be released within a week or so. Looks like the NX20 has an articulating screen as well, but it has that 'fake' DSLR look and design, familiar from the NX10 and NX11.