pdh said:
The tonal range and textures in pictogramax' "Bloomfield Station", and in the man's shirt in arachide's "Grant Street" are wonderful aren't they? (the latter is off the plane of focus but still manages to be rich and detailed) ... be interesting to see them printed
Click to expand...

They are both stunners. I never knew there could be so many shades of black

Just to be clear, these are not my images, but I posted them as an example of a fine TLR overlooked because of more hyped models. I got to know it while researching the subject, but then got sidetracked into vintage MF folders
I

Yashicamat 124G has a battery operated light meter.. I have one. I use 120 film, you need the original take up spool or to get one if it doesn't have one and remember to ask for it back from the developer or black bag swap it out for the 120 it came off of. And glancing up Antonio already answered that. But I can show you too..

Two figures in the far back, me and my cousin. She is the one in the light colored pants. I am the one with my elbows jutting out.. guess why This was the first roll of film I put through it thus my first shots. The reflection is in the Cloud Gate or the bean as it is known as, in Chicago.

*Also have the wide angle and telephoto lens attachments. Shot with the camera on Wed this week.. I think the photo lab messed it up because it was darker out if anything I should have been underexposed but a lot came out bleached looking. Wish I knew how to and had room to develop so no point in sharing those.

Second was beside a lake, playing with dof, wanted a shot through the reeds and that was the result. This was the second time I used the camera. The stuff I had developed yesterday I had to toy with and ended up grainy and odd, not a true representation of the camera, as I said I think they messed up developing.
P

I went to a "camera fair" today (basically a table-top sale with a few dealers there too) ... not too many TLRs, but amongst the rows of old SLRs was a box full of older Mamiya 645 (complete with lenses) (MF SLRs) ... I enquired as to the price - about £80 for a decent one (and probably a bit less after a bit of light haggling) ...

And I made the 30 mile bus journey to Plymouth yesterday to pick up some 120 roll film, so any day now hopefully some 6x9 negatives to play with out of my Mamiya Press camera.

I think we need to see some pictures of that monster, Barrie, when you have a moment .

Come over to the dark-side Luke....

This is excellent news mate....excellent news indeed!!! I note you having a small dig at me on flickr about 'paying for my shots' with the Canonet and now you, in a typical show of one-upmanship, go and want to shoot negatives 4 times as large

Honestly, I'd be thinking about the larger format too down the track - and the Yashicamat 124G is always suggested as a great first step. Also once you have the kit to develop 35mm B+W negative they all fit 120 just as well, all you need is a little more soup.

I'm loving film!!!!! And we're getting quite the club going here with Brian, Barrie, Antonio and others.... 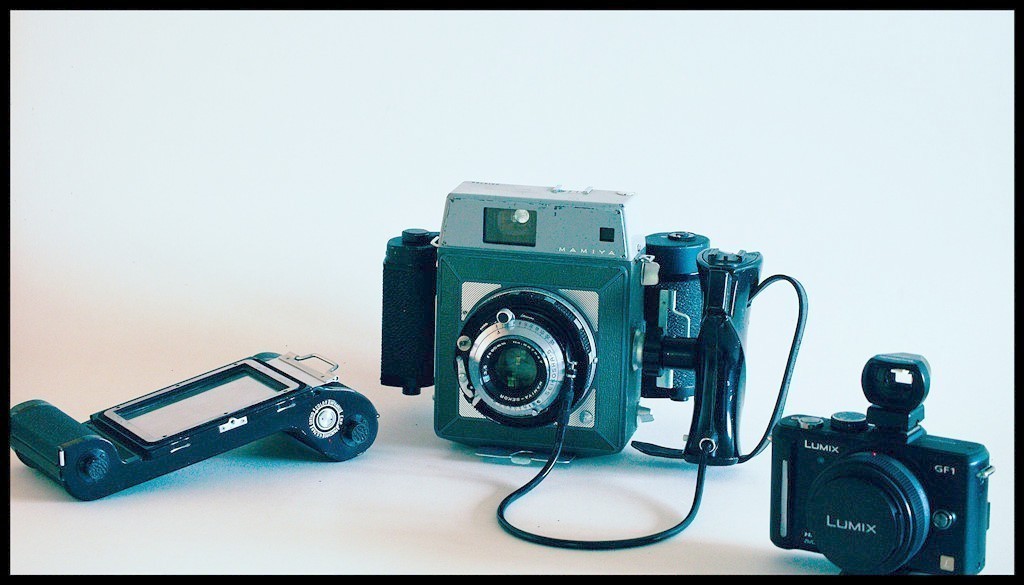 
Copied over from mu-43. If you goggle Mamiya Press this image actually comes up fairly early on.

I've actually got a second body where I've taken the rangefinder off and mounted a viewfinder on the cutdown body for zone focusing use only, that's been finished all in black.

so, easily pocketable then ...

You want to see the cutdown version I've just posted. Actually easily held and I used to do street photography with it many years ago. I needed a big jacket to hide it under

I got both of my Yashicamats at flea markets. In excellent condition too. You can get good deals out there. The 124G was 40$.

I'm not going to have much of any time for photography in the next couple months, so I may peek in on the thrift shops when I pass by and I'll look to see if there are any camera collector trade shows locally, but I'm slammed with work and I need to get working on that book, too. Thanks all for your input!
I

That's how you do it Luke.. you stop by a little shop you see driving and you stumble on treasures. It's all good, try to take a break from the work if only to breathe a little
You must log in or register to reply here.
Share:
Facebook Twitter Reddit Pinterest Tumblr WhatsApp Email Link