Armanius and I had the pleasure of interviewing Ray Sachs tonight for this third episode of the Serious Compacts Podcast.

Ray's work can be found on his Flickr page as well as his Blurb page.

You can listen to the episode here: http://media.seriouscompacts.com.s3.amazonaws.com/SCP-0003.mp3

In the course of this podcast, we refer to several of Ray's photographs shown below so that you can follow along with the discussion: 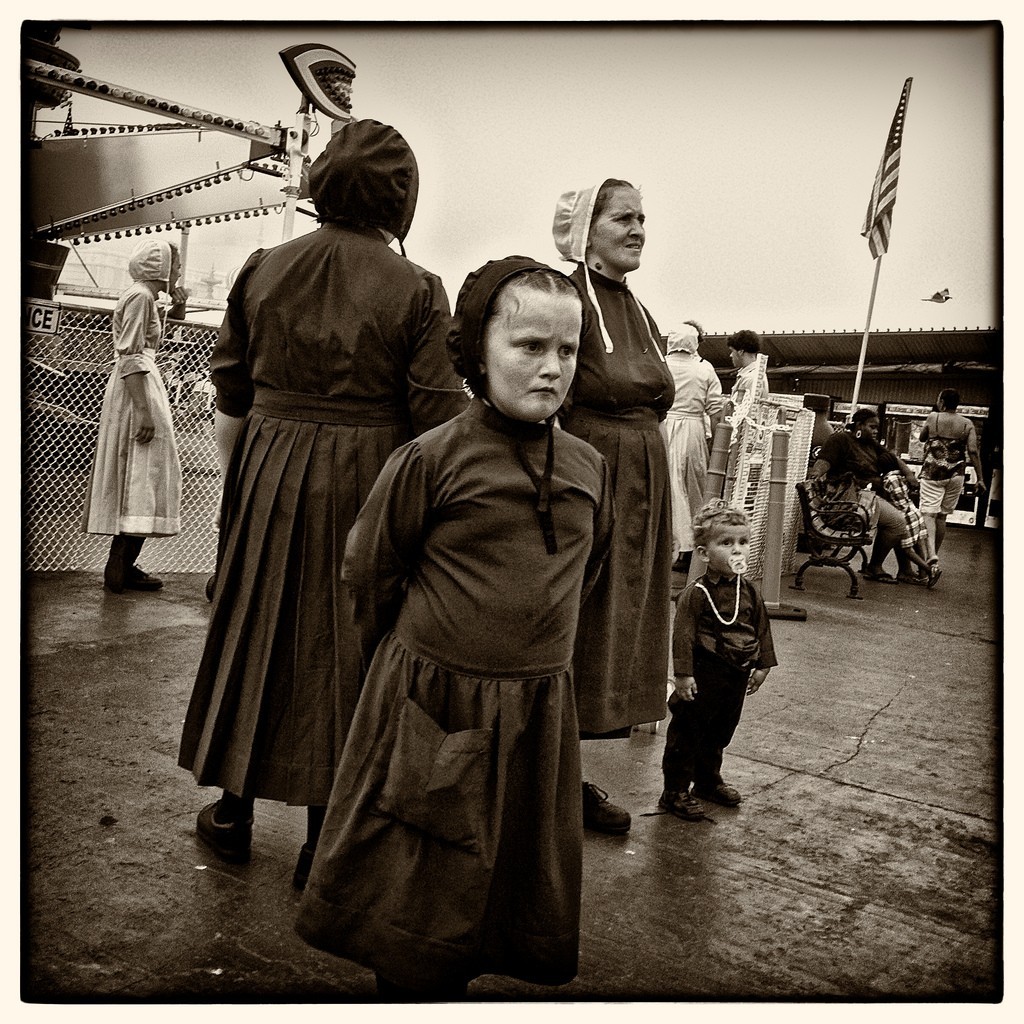 Ray recommended the photography of Bob Tullis and mentioned that he'd like to interview Bob on a future episode of the podcast.


Thanks again to Ray for joining us on the podcast!

It was fun and informative! Thanks to Ray and Amin!

Another great interview. I loved Ray's answer to Armando's question of "do you believe in cropping?": "I don't believe in rules" Putting the final image above the purity of the process. Nice one, Ray. I also enjoyed the discussion about compositional streetshooting and reactive streetshooting. Great work, guys.

Thanks so much to Amin and Armanodo - I've never been interviewed beyond a few newspaper quotes and it was a lot of fun. There were three more of my photographs discussed in the podcast that I figured I'd add links for here.

First, Armando's link to the shot of Louis Mendes, above, isn't showing up for me - not sure if it is or isn't for others, but it may have something to do with my privacy settings on Flickr. In any case, here's one that should show up:

We also discussed an example of where the subject of the photo was looking directly AT the camera and this is that photo:

I should add that the reason I generally don't want the subjects to be aware of me shooting isn't due to shyness or any particular concept other than I want the photos to be about THEM and the moment THEY'RE having, not about me suddenly showing up in their lives for a second and their having to react to me as a photographer. So, occasionally shots like this are unavoidable where you're just fully and thoroughly BUSTED and, in a few cases, they kind of work in their own right. But that's generally not what I'm going for - trying to be an observer OF the moment rather than a participant IN it.

And, finally, there was some discussion of a specific color shot from New York City, and that would be this one: 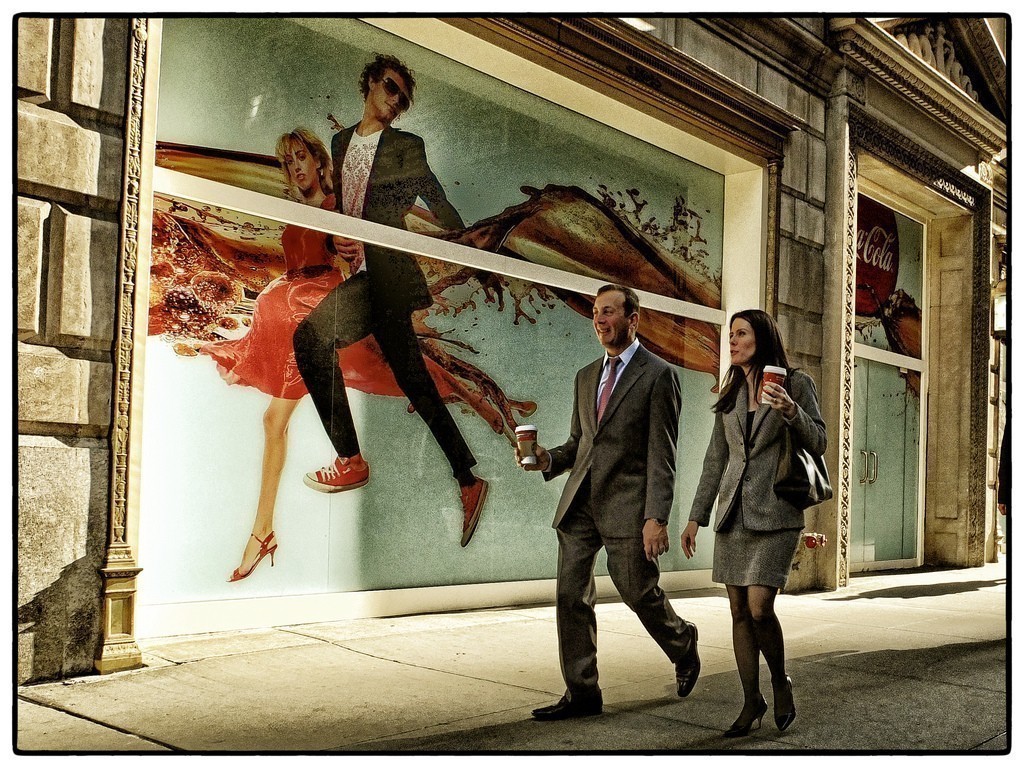 Thanks again guys. And to other forum members - if Amin contacts you to be interviewed, go for it! I was mildly concerned about how it would go and whether I'd really want to do it, but it was thoroughly painless and a lot of fun. So I recommend the experience!

Another great interview. These interviews are one of the best things introduced to SC. I also have begun going to NYC occasionally since my son and his wife have given me my first grandchild there. As one who prefers country to big city, this has become a welcome change, and street photography with small cameras has made it interesting.

these are better than "prime time TV" - (if I knew what prime time TV was! - but you know what I mean)

- just listened all the way through whilst eating my breakfast cereal, Agen prunes and fat free yogurt, (if you can still call it yogurt after removing all the fat, sugar and taste)

- obviously very interesting and information but great to hear the voices behind the faces.

Congratulations (again) for bringing this to the forum

i can't wait to hear this - I think I'll have to dig out my iPhone's ear phones - or go on a nice long drive!

This one was eye opening as to how some folks "see". Thanks guys, for a interesting "listen".

Wow! Another great episode. Thanks to the 2 A's for making it happen and thanks Ray for sharing your insights. I've been a fan of your photos (and your posts) for a long time.

I can't tell you how much I have enjoyed this interview, first it's hearing Ray's voice...after all the emails and PMs over these, what two to three years, we have never actually spoken. You're just as personable on air, as you are in print, Ray.

What's so interesting is how much I think a number of us have in common with regard to our past and how we got back into photography...especially those of us who are not professional photographers and who are within a certain age range...though I find listening to Amin's descriptions of his family life very reminiscent, as well.

I particularly enjoyed hearing how you have developed your eye...and couldn't agree with you more when you made your statement about not believing in rules - three cheers!

You've always been such an extremely helpful member here and over at Mu43, and it goes without saying an inspiring photographer. I am always excited to see what you've added to your Flickr stream and here on SC.

Thank you Amin and Armando - once again for an extremely enjoyable interview - you guys are getting better all the time. And Ray, you're the perfect guest! Promise to let me know when you're coming up to The Big Apple and we'll get Mr. Mendez to take our picture together.

Wow that was so cool, I love now being able to match the voices with the names and posts, Really a lot of fun, very insightful and entertaining, I may be in the minority here but I almost wish it went on longer.
Thanks guys I really enjoyed listening in on your discussion.

Actually regarding the length. They could go on all day for all I care, but half hour installments might be nice...or 20 minutes. I don't know how everyone else consumes them, but I click the link and play in a browser window. I kinda panicked because I thought I might have to leave for work before it was over and I don't think there's any way to navigate through them....correct me if I'm wrong.

Luke said:
I don't think there's any way to navigate through them....correct me if I'm wrong.
Click to expand...

Hi Luke! There are no chapters or anything like that, but you can navigate through the sound file by using the slider on the program that your computer is using to play the sound file. On my iPhone or iPad, the sound file is played through some Quick Time facsimile, via the Safari browser. On my PC at work, clicking on the link triggers Windows Media player. You should be able to use the slider to forward or rewind the sound file.

Three podcasts in and you guys are so smooth you make it sound easy (which is really hard to do).

I love Ray's photo's. The couple with the coffee is just brilliant.

Glad I've stayed up to listen to this one. Thanks Ray for your insights and your behind the scenes thoughts on how you see through the lens, oh yea, LCD!

I must say that as an avid Podcast listener, this interview had an amazing level of interactivity between all three of the members. Amin, you're ready to go to CNN and replace Dr. Gupta, an incredible voice which I think penetrates well with the listeners. Armando, excellent questions and insights. Ray, you're a class act and I truly enjoyed your responses and off course your photographs are A1A. I look forward to the next episode.

Thank you very much guys for your podcast. There I am again moving to experience things new, wouldn't normally do podcasts, but with me attempting some "street" photography thanks to the SIJ I was particularly interested in Ray's take on both focal length of lenses that he uses and also his thoughts on auto focus. I've been pretty pleased, and rather surprised, with the results I'm getting from my Voigtlander 12mm (24mm equivalent in 35mm terms) and zone focusing. I might re-appraise my idea to move onto the Panasonic 20mm for it's auto focus ability and stick with my 12mm and 15mm Voigtlanders with there ability for easy zone focusing. Since I'm really stuck with village and small town "streets" I've been asking peoples permission when they are engaged in some sort of activity/work, there's no way with so few people around that I'm going to go un-noticed, so a different approach but one that I'm hopeful will bring forth some results.

Just read through all of these nice comments. Let me second (or 3rd or 4th or 10th) the praise for how well Amin and Armando handle these things from "behind the mic" - they made the process incredibly easy, non-threatening, and fun. And for all of the kind words regarding my photos, I'll just again say THANKS!

And now I look forward to hearing some of the rest of you in upcoming podcasts - its a nice way to get a better feel for the people behind the names we see on the forum.

I really enjoyed this podcast, have listened to it twice already! You guys are getting slick! Good to see the pictures in the thread as a supplement to the discussions. Great job everyone involved. Ray, always interested to read/hear what you have to say.

Armando, I was so impressed with the Blurb photo books I am in the process of making more!
D

Finally got to listen to this. I thought it was great how Ray walks us through some of his process. I don't feel to bad if I take a ton of images now just to get things right, LOL. Very informative and enjoyable. Well done all!

In regards to chapters, on the first podcast I think it would have been easier to navigate. On there wasn't as much jumping around in topics so I didn't mind not having them. It might be good to post the time into the podcast that certain topics are talked about. That way if we are only interested in a few, we can just fast forward to those and listen.

At any rate, I think they are great no matter what.