Black Ibis on top of a leafless tree. Photographed with a Canon PowerShot SX10 IS:

Wow, nice pair of parrots. Are they yours? Hmm, I see no birds, just the beautiful fresh green of a beech tree coming into leaf, a few trees yet to come into leaf (oaks?), oh and a lone Scots Pine. There's that Scots Pine again, is there something built in the crown of the tree? Oh yes, it's actually been there for many a long year and is occupied every year by a pair of Ravens. They nest early with eggs being laid in the second or third week of February, so these young, 2 are visible will be taking to the wing in the next week or two. This shot was taken through a small gap in the understorey of hazel and cherry.

Meanwhile a mile or two away at the Field Centre the young Rooks in the Rookery are venturing out of their nest to stand on the boughs. They'd better hang on tight if it gets windy, wouldn't be the first to be blown out and fall to the ground. They will not obtain the off white face patch of the adult for a year yet, so are distinctive with their black faces but not so easily told form a Carrion Crow when seen down in the fields after they fledge. There's one bottom left being fed by an adult with much wing flapping as it strives to keep its balance.

All the images were obtained with a Panasonic G1 and 100-300mm Panasonic lens, minimally post processed in Bibble Pro 5 with no cropping of the image.

The border that I have cleared and sown with wild flower seeds is being very slow to germinate, presumably because of the dry weather. My local House Sparrows (Passer domesticus) thought that it would make an ideal place for a dust bath, why couldn't they use the section that I have not fully cleared or planted? To deter them I watered it and then they used to un-planted piece, however some came to feed on the damper bit, so the camera came out, a Panasonic G1 with 100-300mm Panasonic lens fitted. female, who would appear to be listening for something she thinks is there

When the sparrows weren't causing mayhem a female Barn Swallow (Hirundo rustica) came down to collect nest material. Sadly the shots aren't as good as I would have liked. 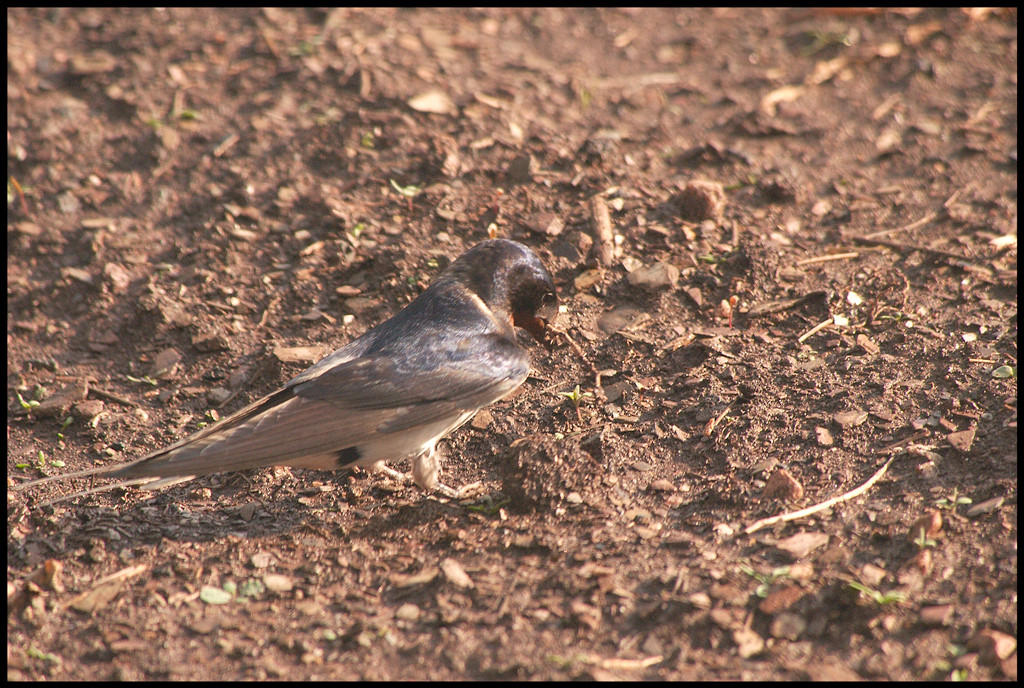 about to take off with a more suitable and modest amount

All shots given minimal post processing in Bibble Pro 5, non were cropped.

Having been away for a couple of days, I see I've missed quite a few pictures on this thread - glad to have been able to catch up, finally!

This poor fellow flew into my window one day. It's a wonder he wasn't hurt and the window didn't break. He jumped up onto my rocking chair and sat for half an hour, collecting his wits about him.

Wow - you were both very lucky! I'm not sure but I think that this is a Red=tailed Hawk: Red-tailed Hawk, Identification, All About Birds - Cornell Lab of Ornithology Thank goodness he was OK and was in a safe place to recover - and good for you for having your camera at the ready! We've put up one of those bird in flight silhouettes on our sliding glass doors to help prevent some flight risks...though ours have always been much smaller birds.
K

You are more than likely correct. Locally they are referred to as a Berry Mills Hawk (i guess because that's the name of the area they frequent )

Well, I'm not sure. I keep looking at different websites...and my field guide. How big was this hawk, Keven? Then I thought maybe it could be a Cooper's Hawk... I did a search for Berry Mills Hawk but didn't come up with anything, so you may well be right about your guess.

grebeman is our resident birder and I hope he'll be able to be more definitive. Remind me again where you are?
K

grebeman is our resident birder and I hope he'll be able to be more definitive. Remind me again where you are?
Click to expand...

I am in Moncton, NB, Canada. The bird was about 18 inches tall. I'm thinking after some research that it may actually be a juvenile Coopers Hawk. NatGeo has a great tool for tools like me!

Good link - thank you. Yes, a Cooper's Hawk may well be what he/she is - what keeps throwing me is the color of his eyes..and I don't see that "wearing a beret" but it could be a juvenile, as you've suggested. If my naturalist friend was here, she'd know in an instant.

The first thing to say is that I’m based in the UK so whatever this species is it will be outside of my experience in the field.

Non the less I’ll talk through my thought process aided by a standard field guide to North American birds.

I think we are dealing with a Buteo type hawk, so a Buzzard type. I’m also pretty certain that it is an immature bird, so very likely a youngster from last year and it will not yet have achieved adult plumage. Thus the underpart and undertail markings are likely to be different from the adult., this often means that where adult bird underparts might be barred, the immatures are often streaked.

The illustration I have infront of me for the immature Red-tailed Hawk shows a large throat AND upper breast area as being white and unmarked, where as this bird has just a small unmarked throat patch. In that respect I would favour a Broad-winged Hawk. Now this species is a migrant so I don’t know if they would have arrived in your area yet. I don’t have an underwing illustration for the Red-tailed Hawk where as I do for the Broad-winged Hawk, one of the field marks for that species is a fairly unmarked white area near the leading edge of the inner wing. This bird shows that to some extent. The dark undertail bands on this bird also look somewhat broader than those in my illustration for the Red-tailed Hawk and are closer to those shown for the Broad-winged Hawk, the adult of which has just 3 broad dark bands, the immature 4 or 5.

I must say that when I first saw the illustration I thought Sparrow hawk type, so that would encompass the Cooper's Hawk, but my illustrations for the juvenile of that species shows a whitish area on the cheeks, this bird is very dark in that area. In the UK the most likely species to fly into a window would be a Sparrowhawk, so that would also suggest that this could well be a Cooper's Hawk assuming they exhibit the same family traits. My guide does suggest that this is a threatened species, so presumably declining seriously in numbers. Looking at the underwing illustrations on the link quoted I still would plump for Broad-winged Hawk.

Anyway, these are just the thoughts of a "limey" with no field experience of the species in contention, make of them what you will.

Thanks Barrie! I'm going to get some more input from my local birders. You may well be correct on the Broad Winged Hawk. I just keep looking at that eye. The shape while perched certainly does look like the photography I'm comparing on the Cornell Ornithology Lab's site.

Beware that the colour of the iris can change as the bird matures. In the UK the iris of our Common Buzzard (Buteo buteo) can vary between brown, brown-yellow, brown-grey and sometimes grey or white, thought to be correlated with plumage colour which is extremely variable in this species, the iris of the young bird is generally paler. For our Sparrowhawk (Accipter nisus) the iris is yellow to orange in the female and yellow to red in the male with the juvenile showing a yellower iris.

Fortunately because of the SC forum, I now keep my camera in my car. I was just starting my beach run when I saw the following birds. Taken with my beercan at 210mm and quite a bit of cropping. I have just purchased a 100-300mm to get me closer next time. The eagle took off in flight soon thereafter but none of the shots turned out. :sad010:
View attachment 35692
View attachment 35693

A couple of more prosaic images than those submitted by summerkl above. Both shots taken on a Panasonic G1 with 100-300mm Panasonic lens zoomed to 300mm. Neither image has been cropped. Wood Pigeon. I am now even more convinced that when this bird and its friend visit my newly germinating wild flower border they do not have benign intentions towards my emerging plants. male Greenfinch, not as green a one as many that you see, but still a male, and I'm assuming it was his lady friend who had been collecting nest material a minute or so before his appearance.

I don't tire of common birds ... so here's another Blackbird Paul, your Blackbird picture is really nice with that wonderful light - not sure if it's morning or late afternoon, but you caught him just right!

I'd completely missed Barrie, your response about the "beware of irises" post - good point, thank you! I also like your more prosaic pictures, too. I think summerki/Kevin is going to be very, very happy with that lens when he gets it.

Kevin, that is so cool that you saw both of these birds and were able to get your camera and "beer can" out in time! The Bald Eagle is such a commanding, dramatic bird of prey. Many years ago I had the pleasure of seeing an immature one very close - about 3 yards away on a branch. Don't ask me for a photo...it's burried somewhere and wasn't that great. Your heron is a calm beauty. Lovely image. When does that lens come?
W