Some advice and counsel needed

It wasn’t long after I joined Serious Compacts that someone said (and I forget who, or I would happily give credit) that their philosophy was “take a camera everywhere and see what happens.”

So I decided to adopt that philosophy, and very quickly I encountered this on a trip to the supermarket 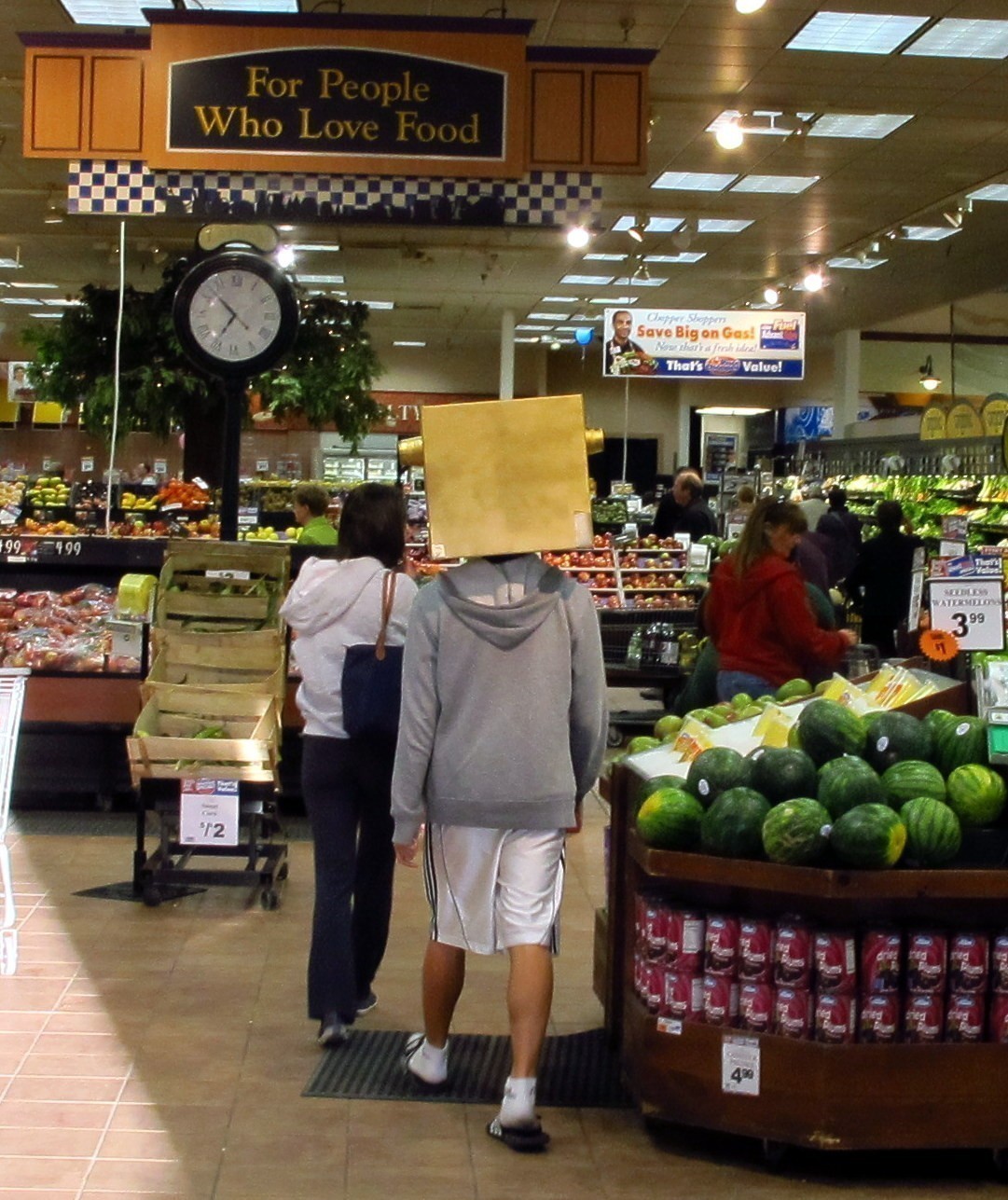 This, of course, only confirmed the notion of taking a camera everywhere and seeing what happens. The photo was taken with an Olympus D550 clamshell camera.

I bought the OMD EM5 with 12-50 because I had a dust-spot-on-the-sensor problem with both my Panasonic FZ200 and LX100. I got rid of them because I couldn’t figure out how to prevent additional hundred-dollar trips to the camera repair shop. The OMD EM5, with its automatic sensor cleaning and environmental sealing, would prevent these repairs. And it did.

There’s just one problem: I don’t carry it. I bought more lenses, thinking that would help. I bought another body (so I wouldn’t have to change lenses in the field). I loved each new “solution” for a while and then stopped carrying them.

So what camera or cameras actually go out the door with me? The G12 (mostly on trips to the store) or the HV400V (on walks where we might encounter wildlife).

Oh, don’t get me wrong: the OMD EM5 and OMD EM5 II are lovely, beautiful cameras that operate exactly as advertised, and they deliver the goods when I use them . . . which isn’t often.

So this leaves me with a quandary: should I hang on to the OMDs in the hopes that my interest in them will be re-kindled or that I get an assignment where they are actually needed, or should I sell them while they still have some value (even though I will probably take a considerable beating from what I paid)?

The EM5 is going in the $300 range from camera shops, sold used in mint- condition- as per quick Ebay check.

My advice- get the 17/2.8 for it and carry it around as your point and shoot camera, don't worry about the value.

I'd sell off the E-M5II while it still has value....the original E-M5 I'd keep (and actually do myself).

I jumped off the newer camera merry-go-round awhile ago and only "dabble" and gear churning after cameras have taken on their biggest depreciation drop. a 3 or 4 year old mint camera is "new" to me. And I think IQ improvements have been VERY negligible since around 2012 or 2013 anyways.

To be totally honest, my cell phone is the camera that goes everywhere with me.

I love my Sony A6000, but I only take it places where I know I am going to take pictures.

Jock, what a shame you had problems with your LX100, I would regard my Leica D-Lux Typ 109 as a walk round camera for grab opportunities, all other cameras are only used when I'm on specific image making outings, Panasonic GX7's for situations where I might want speed of response and Sigma Foveons for more contemplative slow work such as landscapes. As one who tends not to sell cameras on I won't offer any advice on what to do with your Olympus, only to say that all too soon they have lost most of their value and owe you little money. I agree with the comments by Luke over IQ and virtually all my cameras and lenses are second hand, hence three GX7's, each one fitted with a different prime lens, 15mm, 25mm and 45mm. Perhaps you can tell I'm no fan of zooms!

As my every day camera, its either the iPhone, or TZ60. (I also sometimes swap out the TZ for the LX100). I almost never use my Nikon 1 stuff anymore, much as I like it, and I take the Pentax gear only if I am going specifically for the purpose of taking photographs. Maybe you need to set aside the Oly gear for "going out for photography stuff" and anything else for every day. My bridge cameras are for shooting birds in and around the neighbourhood, I've found that trying to get distant shots is just fraught, they never turn out as you see them.

lenshacker said:
The EM5 is going in the $300 range from camera shops, sold used in mint- condition- as per quick Ebay check.

My advice- get the 17/2.8 for it and carry it around as your point and shoot camera, don't worry about the value.
Click to expand...

lenshacker said:
The EM5 is going in the $300 range from camera shops, sold used in mint- condition- as per quick Ebay check.

My advice- get the 17/2.8 for it and carry it around as your point and shoot camera, don't worry about the value.
Click to expand...

For me the deciciding factor might be the "do I enjoy to use this?"-factor.
I totally get why you prefer a smaller camera at public places like the shops (I'd never dare to use my "big" cameras e.g. at a supermarket) and I get why you like the H400V for walks.

I also prefer to “take a camera with me and see what happens.” - and for that approach zooms work much better for me than primes...
My "everyday-take-everywhere" camera is my phone (which I don't enjoy to use all that much ) but on the weekends I carry a m43 or 43 camera. (I've acquired a few of those over time, but they're "old" now, so no point in selling them. Also, since they're old, I don't worry as much about scratching or breaking them anymore, they're just there to be used.
They all give plenty good results for what I do. And I know how to use them by now... most of the time anyway )
Last edited by a moderator: Oct 14, 2017

The 17/2.8 cost less- could pick it up for ~$100 used. It is also smaller, makes for an easier everyday carry-around. Mine just about lives on an EPL2.

Jock, it seems to me that the key criteria for a 'constant companion' camera is convenient portability and the ability to produce the IQ you wish.

If you are reluctant to carry the OMDs, my advice would be to let them go. Focus your time and attention on gaining deep proficiency with a specific camera that is well matched to your particular need, however you choose to define it. I think this is the path to better creative output and personal satisfaction, whatever your level of experience.

My particular journey keeps leading me to the Ricoh GR. Spending concentrated time with it [and learning how to exploit its unique characteristics] has taught me a lot, and raised my [still modest, I admit] game. If my attention had been split across a wide range of cameras I don't think I would have learned as much. Letting go of a fairly extensive DSLR kit was the best thing I have done to improve my skill, and it was a useful lesson in humility.

I am tempted by the Leica Q. Recently, I was 'hands-on' with one for a short time. I left with a positive impression of this camera, and its enormous photographic potential. But also realized quite quickly that I would be less inclined to carry such a relatively large and heavy camera at times, or to use it in situations where the investment it represents might be at risk. Those inhibitions would keep me from learning as much from it as I have from the GR. This left me with a greater appreciation of the GR, and how well it is matched for my current needs: convenient portability and IQ that is more than acceptable.

Bottom line: if I were in the situation you describe, I would no longer hesitate to shed the equipment that was no longer teaching me much, by which I mean not seeing rigorous use. I would use the proceeds to find something that would create that learning opportunity.

emerson said:
If you are reluctant to carry the OMDs, my advice would be to let them go.
Click to expand...

I agree and have in fact gone to the same path. However I already had the accessory EVF for tougher situations and kept most of the glass (mainly use 9-18; 17/1.8; 45/1.8 and 40-150R) and limited the bodies to E-PLs. I find the E-Ps and E-PLs form factor significantly easier to carry on a daily basis and the E-PLs have some weight and cost gain over the E-Ps. I'm happy with the decision.
You must log in or register to reply here.
Share:
Facebook Twitter Reddit Pinterest Tumblr WhatsApp Email Link

Advice needed on a possible commercial use of some photos

I need your advice.
2