Sony's NEX bodies are impressively small. As many have pointed out, the standard zoom isn't large, but it looks big relative to the NEX-5: 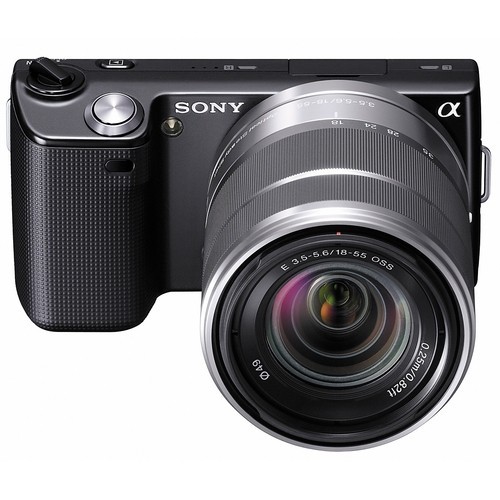 As a result, many folks are interested in using the NEX bodies with smaller primes or adapted lenses. For launch, Sony decided to produce one prime, the 16mm f/2.8. The 16/2.8 looks well matched to the small NEX-5 body: 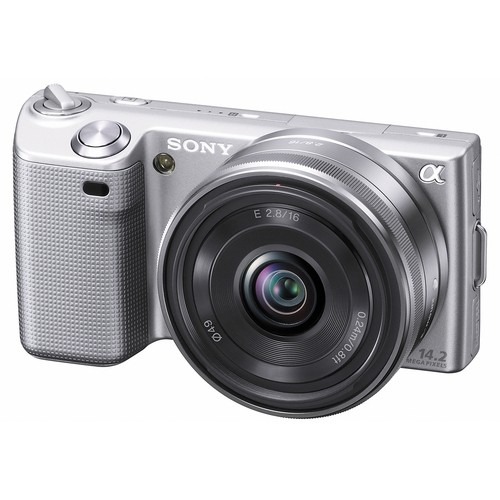 It makes one wonder, why 16mm? The likely answer is that 16mm complements the standard 18-55mm zoom well. While the standard zoom covers from wide angle to short tele, the 16mm lens (equivalent to ~24mm in 35mm frame terms) gets one into what would traditionally fall under ultrawide angle photography. Thus by carrying both lenses around, one extends the range without much additional size/weight.

However, if the idea was to complement the 18-55mm lens, why not make the prime even wider? A 14mm lens (~21mm equivalent) would have provided a very nice contrast to the 18mm (~27mm equivalent) end of the zoom. The answer here is likely that Sony realized some folks would want to walk around with only the single prime, and 14mm would just be too wide for most people's "walkaround" needs.

Now that the 16mm lens is here, and everyone is aware just how small the NEX system can be, Sony is bound to bring out some more prime lenses, and I've been thinking about what the best strategy might be. A short tele, ~50mm (~75mm equivalent), would make for a potent two lens kit. In a way, 16mm is the new 18mm. Many people enjoy general and scenic photography with a lens that borders on ultrawide. A small short tele would add the potential for portrait, short depth of field, and close up photography, which would provide great versatility in a 2-lens (16 and 50mm) kit.

What are your predictions and hopes for Sony's NEX lens lineup?
A

Interesting question, and one that I think applies across the board to all serious compact brands. The Panasonic 20mm and Olympus 17mm m4/3 lenses have proven that there is a real interest in primes. Samsung has their 30mm prime, Sony with the oddly chosen 16mm, and Ricoh with the 50mm and soon to come 28mm. In 35mm terms, I'd love a trio of 21, 28, and 50. Since I'm a fan of the GXR I hope their next prime after the 28mm is a 21mm.

The consensus around the Sony NEX lenses seems to be that they really aren't that good.

Andrewteee said:
The consensus around the Sony NEX lenses seems to be that they really aren't that good.
Click to expand...

Probably impossible to make small lenses for a body as small as the NEX-5, with a sensor as large as the NEX-5, and maintain great image quality to the edges without a custom sensor like the Leica M9 (which would cost too much). Something has to give.

It's interesting that Ricoh, Sony, and Samsung each just have the one prime on the market so far. Getting additional compact primes on the market quickly would offer a substantial competitive advantage.
A

Japan was awash with the NEX cameras. Every retailer had big displays of them, and I got to play with the NEX-3 and NEX-5. The focus speed with the pancake lens was surprisingly good, at least entry level DSLR territory, although it was only in a brightly-lit shop. The camera body itself is small, but even the pancake lens makes it feel more bulky than it should, given the size of the body. The smallness of the body suggests that it should feel smaller than a Canon G7, but with the pancake, it feels bigger and more chunky, even though it's not.

I just got mine yesterday with the pancake. I do like the feel of the small camera/lens combo and ordered it when it was announced. I have since looked at the 18-55 zoom at the sony store and my assumptions for my uses were correct it is too bulky and slow (in terms of F stops, not focus speed). I would like to see an F/2 or 2.8 portrait/macro lens that could be fairly compact about 80 mm or so.
U

I'd like to see a fast portrait lens, but that has a reasonable close focus. Maybe 60mm? An affordable macro lens (meaning not priced like Panny's 45mm macro). And how about a more moderate, fast WA prime -- like 30-35mm -- to act as a normal prime on the NEX.

Come to think of it, I think I'll reverse my wish-list order:

I'm finding the MF help on the NEX is so good that I'm getting by OK with MF lenses for portrait. The other two, though would be really good.

What would your strategy be?
2