Fuji The best (and maybe ONLY) $2.49 camera accessory!

So the X100 presents a conundrum of sorts for the GAS infected owner who, because the camera is such a self-contained little gem, has nothing to buy for it. In my case, I already had the perfect case for it, I have less than no desire for a flash, and don't want the lens hood complicating my life. So WHAT was I gonna buy (besides spare batteries, which are essential but too boring to talk about in polite company).

So, I figured for two and a half bucks, how far wrong could I go with this little soft-release? Its not like its critically necessary, but it turns out it makes shooting quickly just that little bit easier than it already was. Most modern cameras have a large enough shutter button that it doesn't matter and they couldn't use one anyway, but the X100 button is nestled down in there a bit. But nestled down in there NO MORE! If I'd never bought it, I'd never have missed it. But I'm glad I bought it. You could spend $25 or more more soft releases, they make 'em with ladybugs painted on 'em (who knew?). But for for pocket change, you can have the same function and none of the silly looks.

So, for the X100 owner who feels the need to buy SOMEthing for their camera...

So the X100 presents a conundrum of sorts for the GAS infected owner who, because the camera is such a self-contained little gem, has nothing to buy for it.
Click to expand...

Ray, you have one of the best senses of humor! Congrats on your soft touch - you know you wanted that ladybug one!

I promise you, I don't! But I will check out your hyperlink.

'Nice find. I've had a soft release on Bessas, an RD-1 and an M8. I like them and for me it makes since because no matter how hard I try, I occasionally jab the shutter. These, especially if you use the soft part of the pointer finger right behind the finger tip, help quite a bit. I am curious how well they work with a half-push focus lock.
On the down side they tend to fall off very often. A small bit of blue lock-tight helps a lot. (A suggestion from the folks over on the Leica forum.)
By the way, a while back the RFF folks had Tom Abrahamsson make up one with the forum logo. Not a bad idea for this forum either.
These are really nice but cost a lot more than the one Ray has offered the link for.
The Photo Village :: Tom Abrahamsson :: Tom Abrahamsson Soft Release -- Mini, Silver
. . . David

Hi Ray, I went to the Adorama link and the image they have, in particular the threads, puzzles me...are they really conical shaped and if so, how much purchase (how many turns) can you get when attaching the button?

Edit: just realized all accessories that attach to the release button are shaped that way, probably to set a finite amount of depth for the accessories.
I just ordered my camera on Amazon and have no idea when it might ship but I am excited for now....

David, yeah I looked at the TA ones, but they appear to be both a bit larger and a lot smaller than the Adorama one, which might be the Goldilocks size? And they cost about 10 times as much IIRC.

Bruce, the threading is just like on EVERY old camera that used a mechanical cable release. I'd buy one of those too now that I have a camera that could use it, but it would just be for nostalgia's sake. I can't see actually using this camera for anything I'd need a cable release for. With the soft releases, some people have recommended using a bit of nail polish or plumbers tape to get it to stay in place, but I haven't felt the need. Just a good solid turn and it feels pretty well planted. Mine hasn't come loose in the couple of weeks I've had it.

O.K., it works very well indeed. I found an old bright red soft release left over from my Leica times, put it on the X100 and gave it a try. Focus lock wasn't an issue as a matter of fact, to my surprise, I think it made it easier. It is a full size soft release from TA. I think I may actually use one full-time. Go figure. 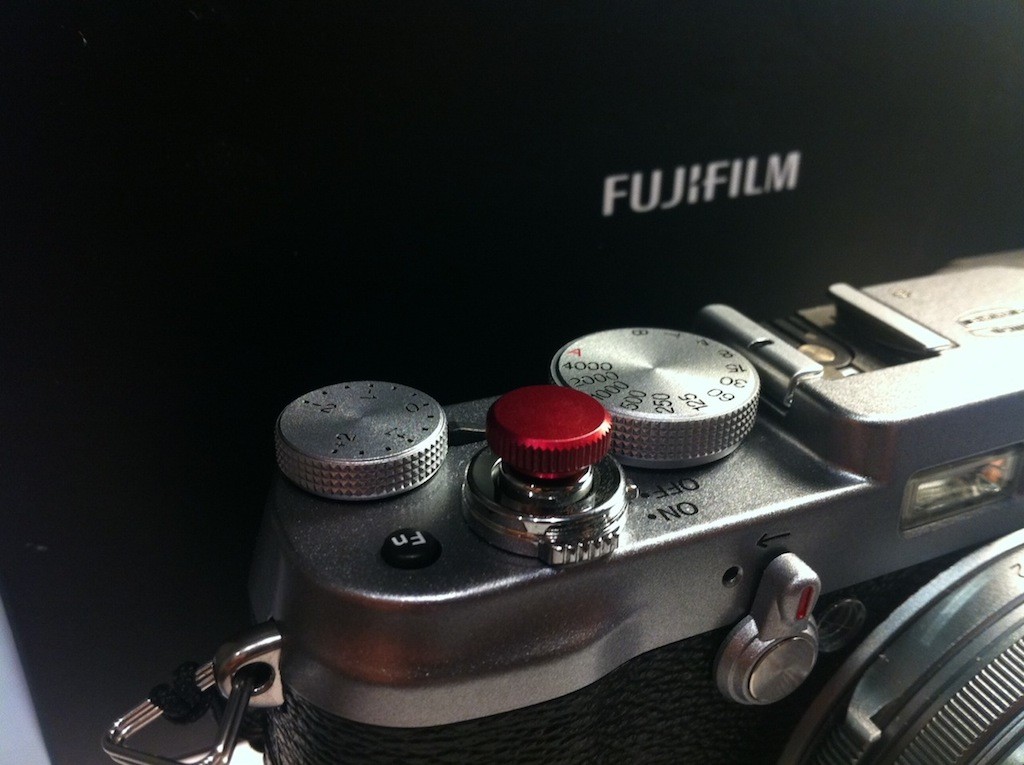 W
Expired FS: NEX Body only and some accessories