So we decided to go to Matador State Beach for sunset yesterday evening, and things started to go off from the minute we hit the sand down the roughly 1/4 mile walk w/stairs.

A. LOTS of people all about. No biggie, we've all got a right to be there.
B. Group of about 10 people all shooting video of three teenage girls posing with red balloons and chasing them around the beach. Looked like a project of some sort. Annoying.
C. My g/f forgot the little grommet thingy that screws into the bottom of the camera and then clips into the tripod for her rig. I had mine. So I gave her mine and proceeded to shoot the rest of the evening by hand, something I haven't done in forever.
D. People were letting their kids run AMOK and get into what were clearly photographers planned out angles, areas, shot, you-name-it.
E. As darkness descended, and long exposure happiness set in, not only did I NOT have a tripod, people on the far end of the beach were using point and shoots with, of course, flashes.

That said, the LX5 has really impressed me with what it can do W/OUT a tripod. Speaks well for the camera.

That said, there are numerous rocks, arches, and massifs up and down the beach, which are nice, but I grew up in the Big Sur/Monterey area, so I've had a lifetime of seeing them

Right as one gets off the last steps, immediately to the right. 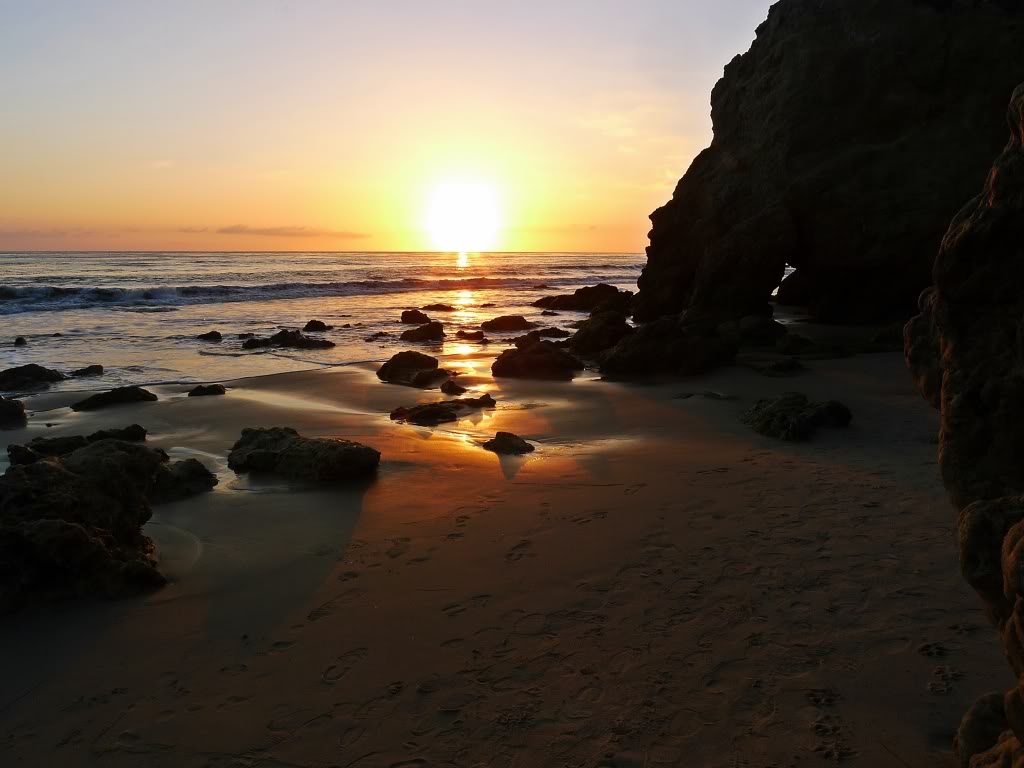 This happened a few times, and I have no explanation for it. The sun showed....green. Ruins an otherwise acceptable shot. 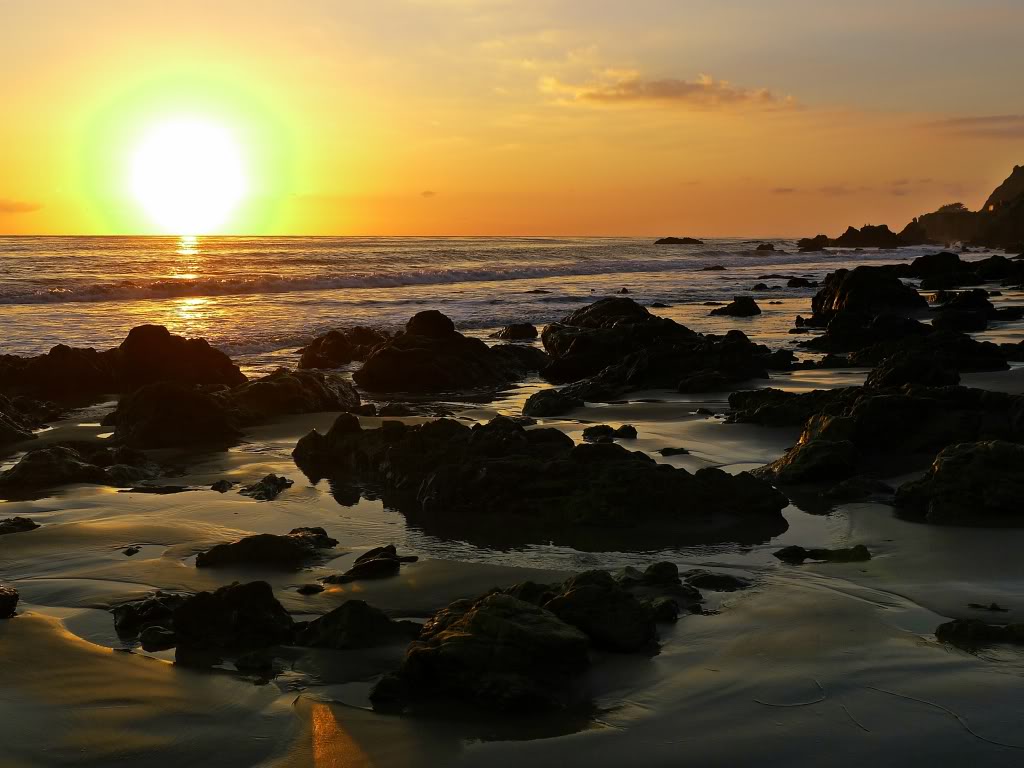 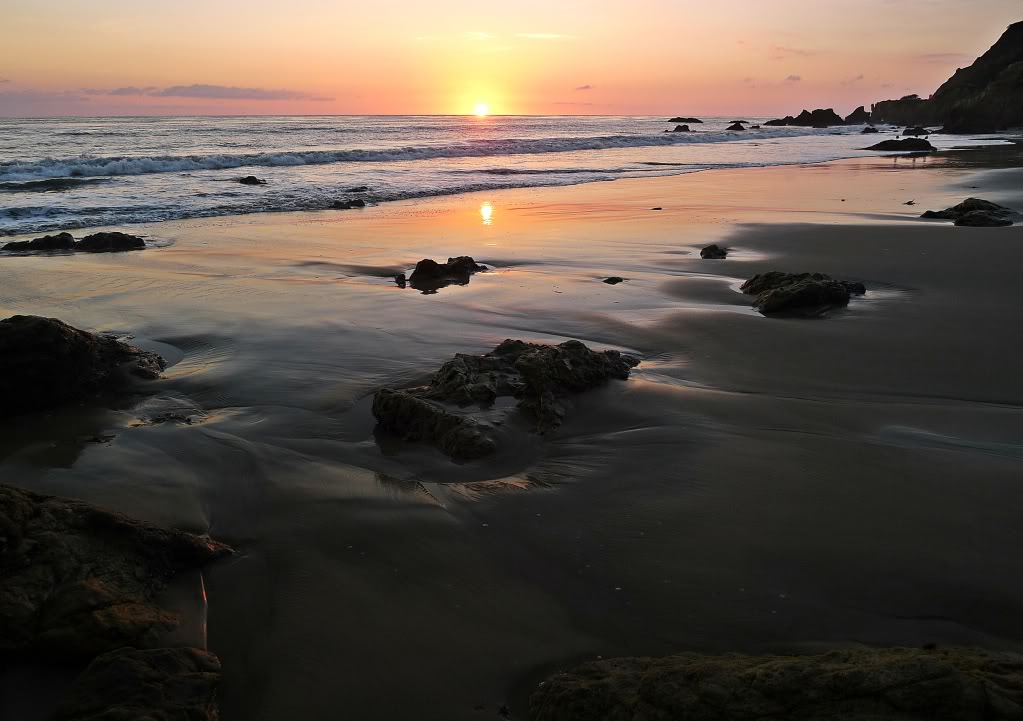 Of course, there are a lot of gulls around, too. I posted another shot in the 'show birds' thread, but like this because of the light coming off the sand ripples 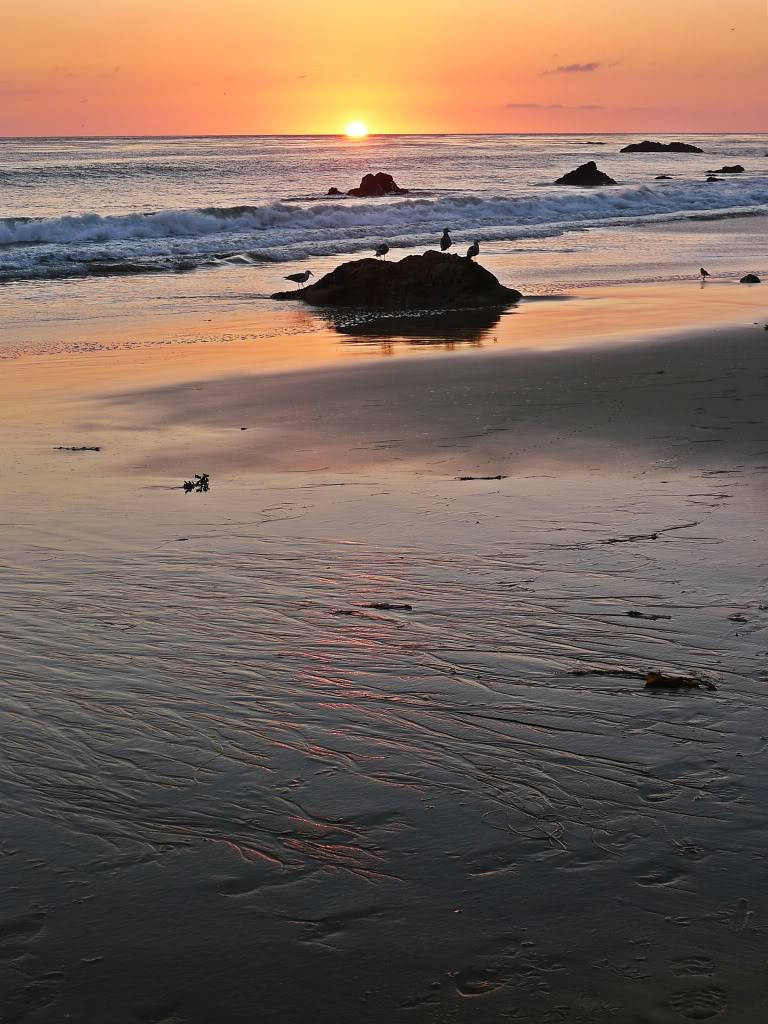 Even under the rocks, one cannot escape the footprints of other people 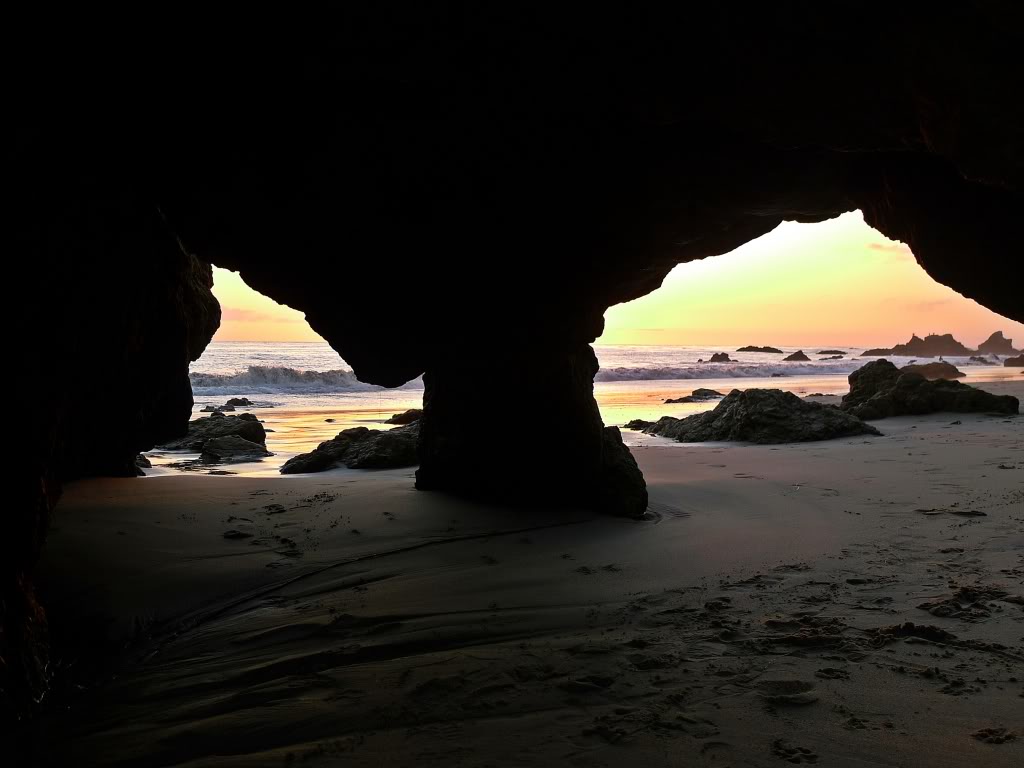 Then, for my last shot of the evening, I get my tripod back but, this being L.A., w/LAX, contrails seem unavoidable. 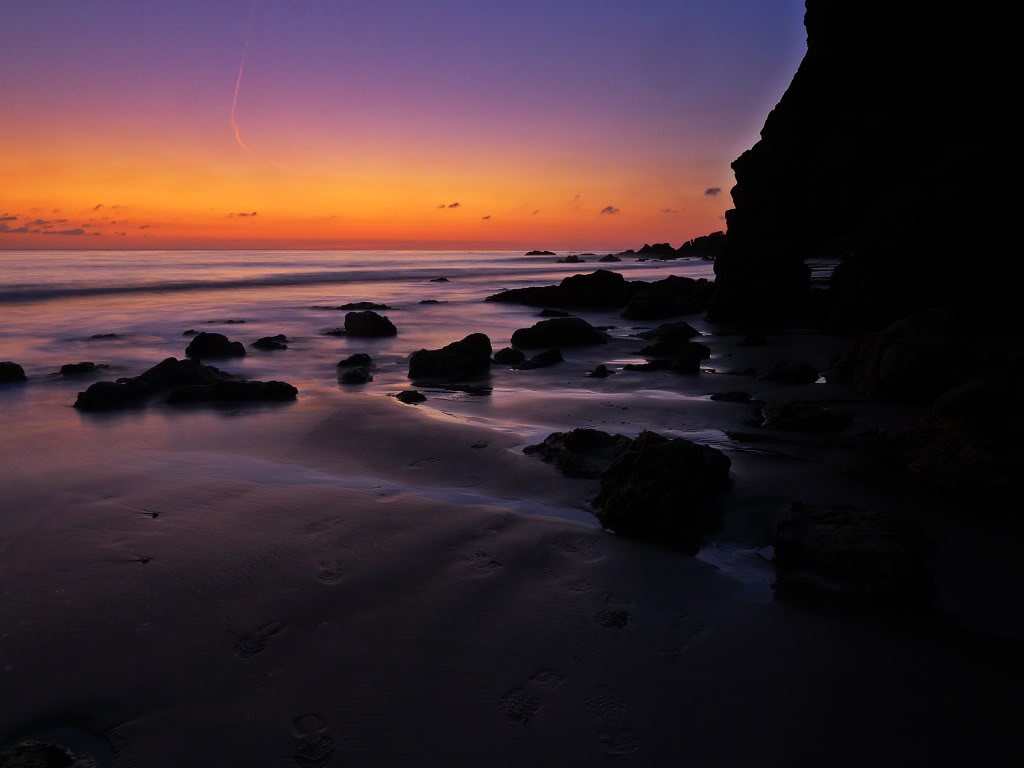 Finally, just for screwing around purposes, I took one shot and tried to make it look like something from a 1970s rock album in the days of vinyl and vans with sunsets on the side.

Dig that heavy trip, man. And no HDR! 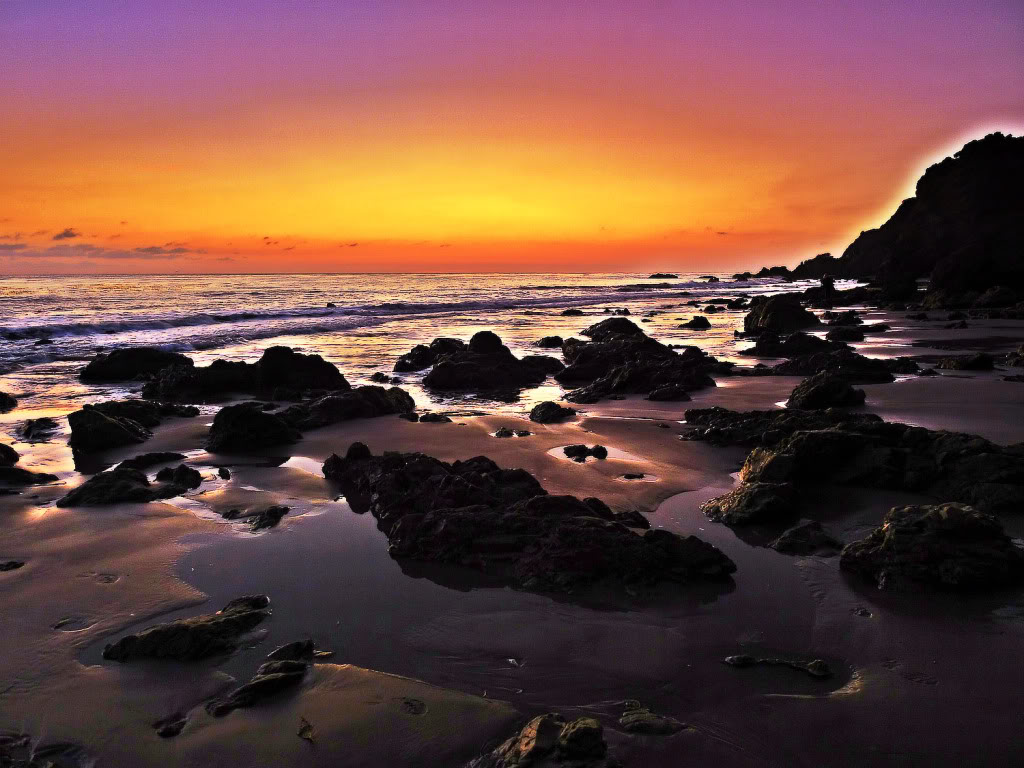 wonderful shot there. not to sound like an idot (which is easy for me to do), did you rely only on the in camera meter to set exposure?
Thanks for sharing

AzPete said:
wonderful shot there. not to sound like an idot (which is easy for me to do), did you rely only on the in camera meter to set exposure?
Thanks for sharing


Yes, I've never used an external light meter, if that's what you're asking, and only ever shoot full manual.

If you've just got the LX5, and you do any sort of daytime landscape work, my highest recommendation is to get the EVF that Panasonic offers. Turns blind-as-a-bat-by-the-sun scenarios into easily workable moments. I put off getting one for a while until I just couldn't stand it anymore.

Wow
Some great shots there..
I love the 1st one for capturing the sunset, the light and flare really add to the photo, and the colours in the sky for the 6th photo are really amazing, thanks for taking them and sharing..

The so-called 'Green flash' (green rim around the sun) is a well-known optical effect. Usually it's hard to photograph, so congratulations on your excellent capture.

Supporter!
Nice set. Thanks for sharing!

Despite the problems you came out with some great shots.

People can be so self absorbed that the ignore other people completely.
D

i really like the second to last one. Very nice.

Early autumn in the southern hemisphere.

N
Oz Day at the beach

Things on the beach