Supporter
Or other sundries.

I am currently sorting through chargers, batteries and other such stuff which tends to be somewhat overlooked at least by me. The stuff that is just there, if that makes sense. This turned into a rather large task, and it also gave room for some thoughts about other pheripherals and how they affect the primary parts in our systems, if not there or turning obsolete.

No battery? No charger? No Memory? - No way to make the camera work

Today I pulled together all the memory cards I could find, which are most of them. I have a handful of 4 and 8GBs out of control, but those are getting old, like single digit 00s old, and most likely resides in drawers, boxes and other intriguing hiding places to be found when looking for something else. 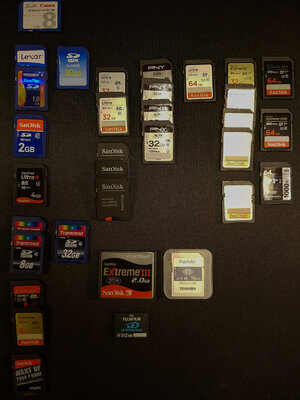 This is the hoard, sorted from left to right in age and speed and from top to bottom in memory size, with some odd ducks in the bottom middle. Not shown but found while rummaging in a drawer over Christmas is a Memory stick, which fitted in my first ever Digital camera, a 4Mp Konica with dual slots. The other one I think was an SD one, it had one of each.

Basically, on the picture are 4 different types of memory, the most common being the SD card, then the Micro SD cards in SD adapters, then the one CF type II and the now obsolete XD card that fits certain older Olympus and I believe, ditto Fujifilm models. Added to that, are the memorystick, which are not shown.

Top left is a 8Mb Canon card, it surfaced in a drawer, I noted the number 8 on it and didnt think about it any further, before I put it in a 10MP camera and tried taking a shot and it naturally wasnt able to store that. Most likely the card came along with a early Ixus somewhere around 2000.

The rest of them are more or less "current", I havent tried the oldest and smallest ones in the last and fastest model cameras I have, but I have tried larger and faster cards in old cameras and they seem to slow down a bit contra more appropriate sized and specced cards, and quite a few seems unable to use the entire card for storage.

For a case by case use it may not matter much as such, the oldies works within their limitation, and that is good enough for me. I anyhow end up asking myself what and when will the standard pass some sort of benchmark where the speeds and or sizes of the cards reaches a level where the camera buffers fails to feed the take to the card?

Or is it just overthink ?

For the SD cards, there seems to be some sort of watershed around 2009-2014, probably fitting to the standards of GB sizing back then.

For the CF cards, there seems to be some sort of "hard" cut-off, the two cameras (Oly 400 and 410) I have that uses CF type II can not utilize larger CF cards than 8 GB. The cameras also have slots for the XD card. Finding a 8GB CF type II card today is a somewhat lackluster experience and that is before opening the can of worms that are XD cards.

Even if one manage to get something going, then there is the question of getting the content of the cards into a computer for processing. CF card readers I think are still current, but the XD readers not so much.

Am I going somewhere with this?

Probably not, it is just some observations, while sorting stuff and pondering the massive amount of non-standardised or obsolete standard stuff, spread out over a couple of short decades, combined with an interest of keeping older digital cameras going. Worth noting is that I could pop a 35 mm film into any camera made for that standard between 1932/33 up to around 2002ish, crank it forward and snapping away.

Not that film is a medium I want to go back to, per se, but - standards!

Jens, I have card readers that can read anything that either you or I have (including your memory stick), but I do understand the problem. Same issue applies with computer memory and peripherals.

My oldest card is a 32 MB Nikon CF (rebranded Sandisk) that came with my now dead Nikon Coolpix E5000. It was my first serious digital camera.

Anyone Use PNY Memory Cards?