Lesson 1: with a premium level P&S w/like the LX5, w/it's great glass and wide angle capability, shooting monumentally things from up close, like in Yosemite Vally, is really easy. Esp. when covered in snow, ala a photo set I posted here about two weeks ago, because the contrast is high. Shooting monumentally huge things when they're far away, ala the Salton Sea, w/it's bizarre, otherwordly light, is REALLY hard.

Lesson 2: Shooting a place as big as the Salton Sea, when one is running late, and doesn't know the area, having never been there before, is really hard.

Lesson 3: I am NOT a wildlife photographer. I wanted to shoot the bizarre, post-apocalyptic falloutscapes of Bombay Beach (and believe me, it's like another planet there, worthy of it's own trip), but there were about 50 people with a video crew there, shooting some commercial, right where the stuff I wanted to shoot was. Men in fishnets, purple hair, green hair. THAT would have been worth shooting, but we moved on, as it was crowded. Anyhow the lesson is that, at the Salton Sea, if you're not shooting burned out remains, you will, by default and w/out exception, be shooting birds. The little ****ers are EVERYWHERE. They're like the brineflies at Mono Lake. Inescapable. Too numerous to count. ALWAYS in motion and always in frame. Hence, every shot that I took, although intended as a landscape, is an avianscape, by default. It's a lemonade-out-of-lemon sitch.

There are also tens of thousands of dessicated Tilapia corpses EVERYWHERE you go on any beach there. The smell is, um, noticeable. Billions of tiny shells that are very sharp, as well.

The light at Salton is incredible. Almost indescribable and like being on another planet. I will be back, better prepared, next weekend. It's pastel hues, beyond-description blues, bizarre 200m layer of particulate matter and ever-shifting clouds made me want to switch from manual to iA just because of the transient nature of every condition. In the following photos, I didn't do any color modifications. What you see is how it was as the camera captured it. I did, however, have a circ. polarizer on at all times.

Just to start off, the problem I mentioned: birds. This would have been an interesting landscape, with fading ridges, gauzy backgrounds, that odd particulate layer.... but no. It's about birds. I set the camera for ten second delay, and when I framed it, there were no birds. When the shutter went off, birds. 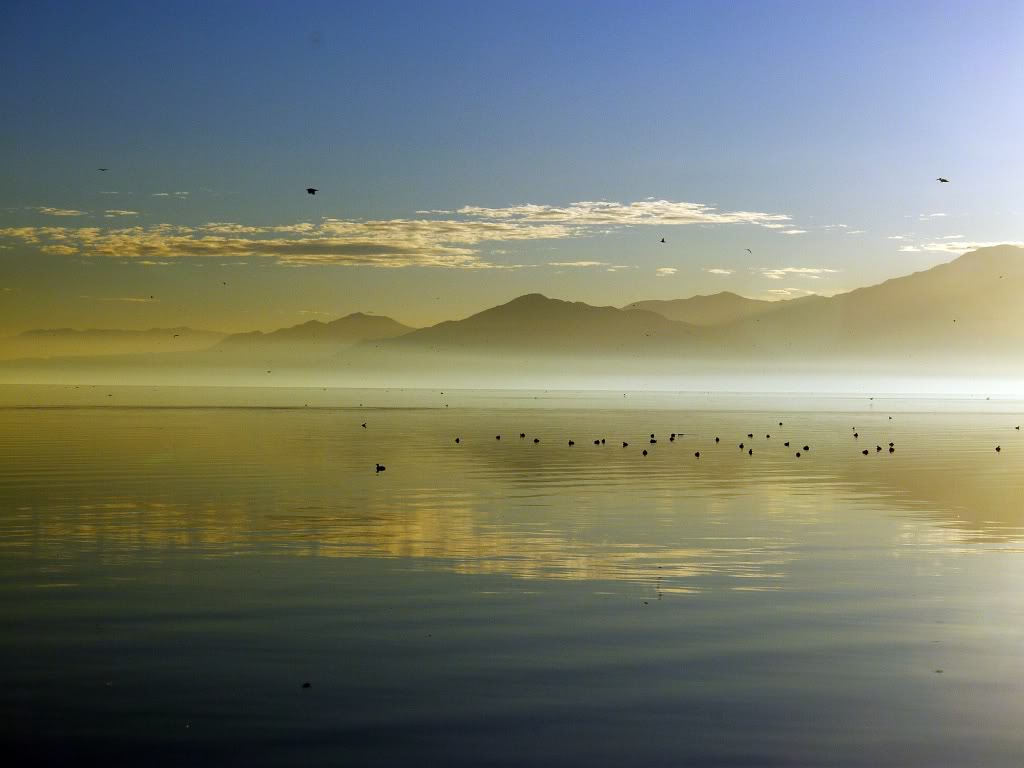 There is also a layer of beach, just after the fishcorpsescape and the skin-shredding shells, of pure bird and fish guano. One discovers this inadvertently, by walking to the water's edge. Hence, this..... 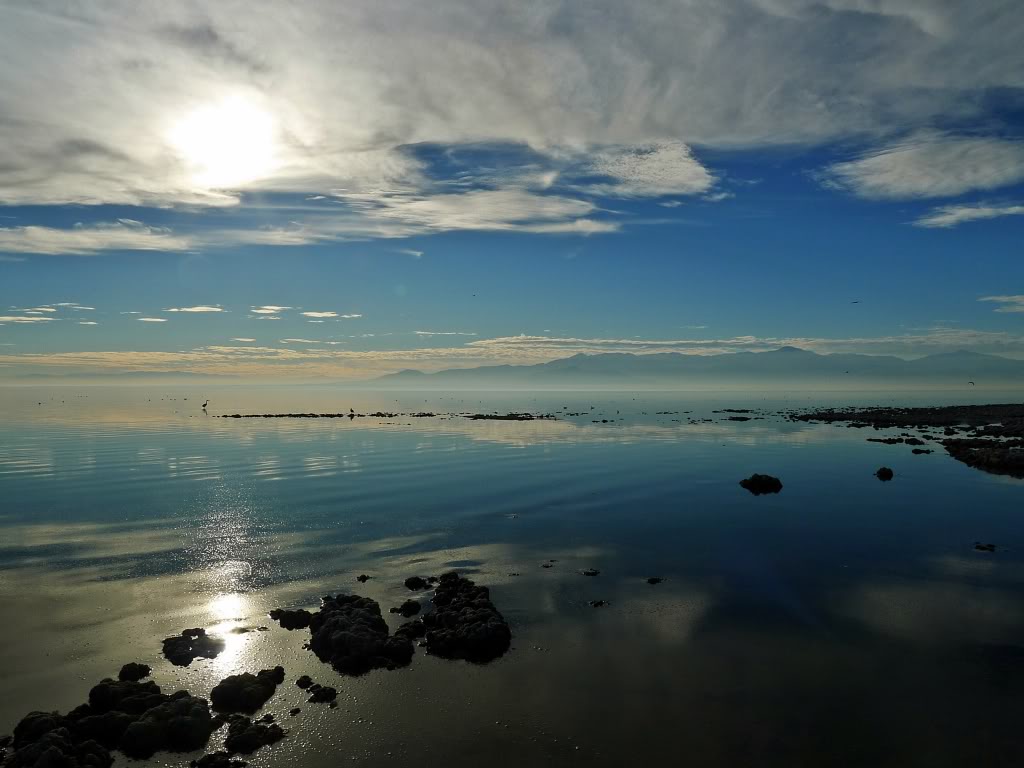 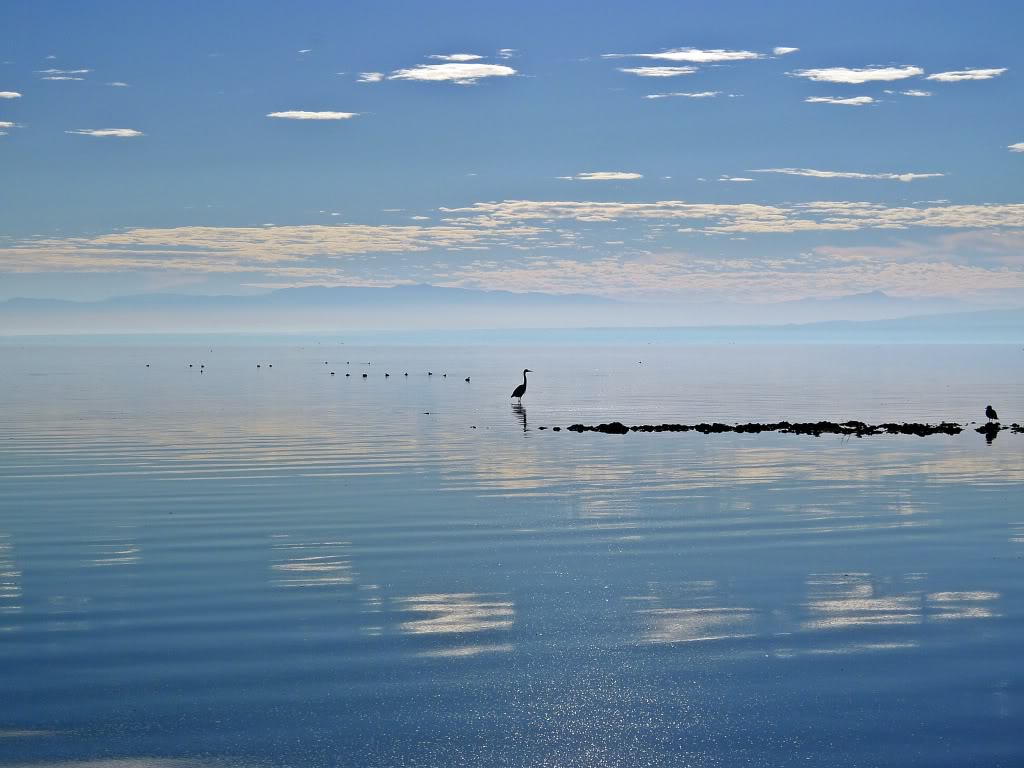 Pelicans, pelicans everywhere. This one struck me because the one one the right is very dark where the light is bright, while the left ones are light. 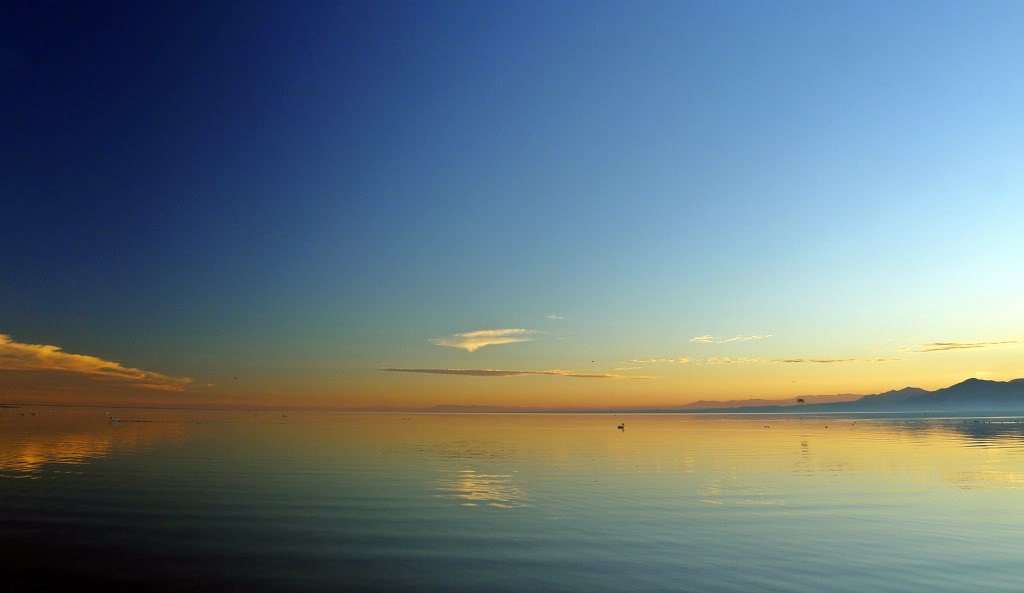 The remains of the wharf and jetty of the long-dead North Shore Yacht Club. Note the (#$*%#)@ birds. 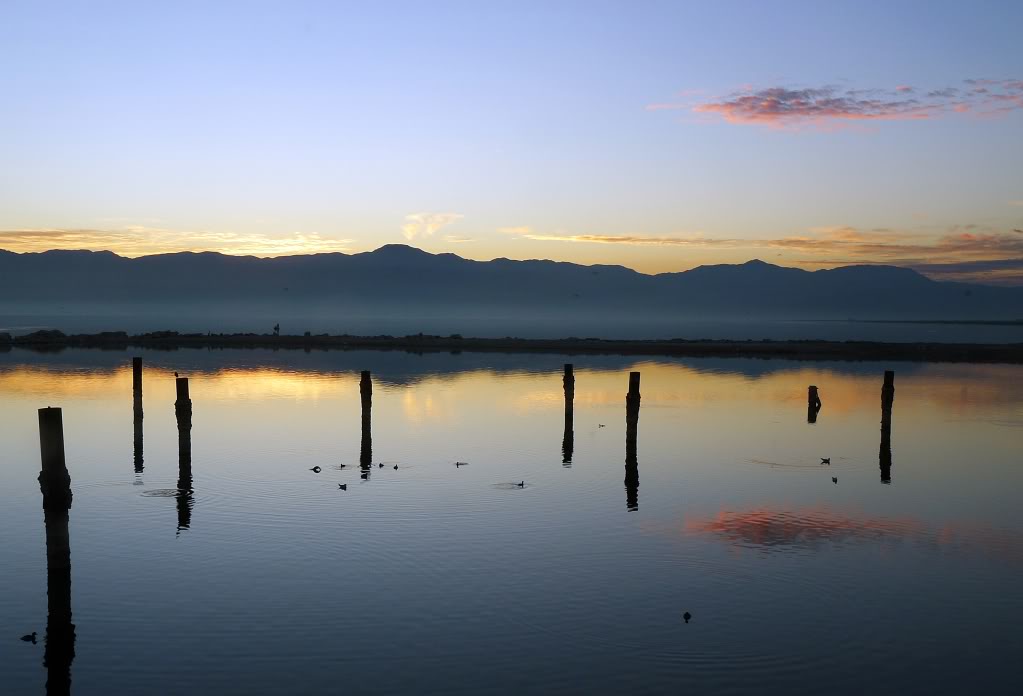 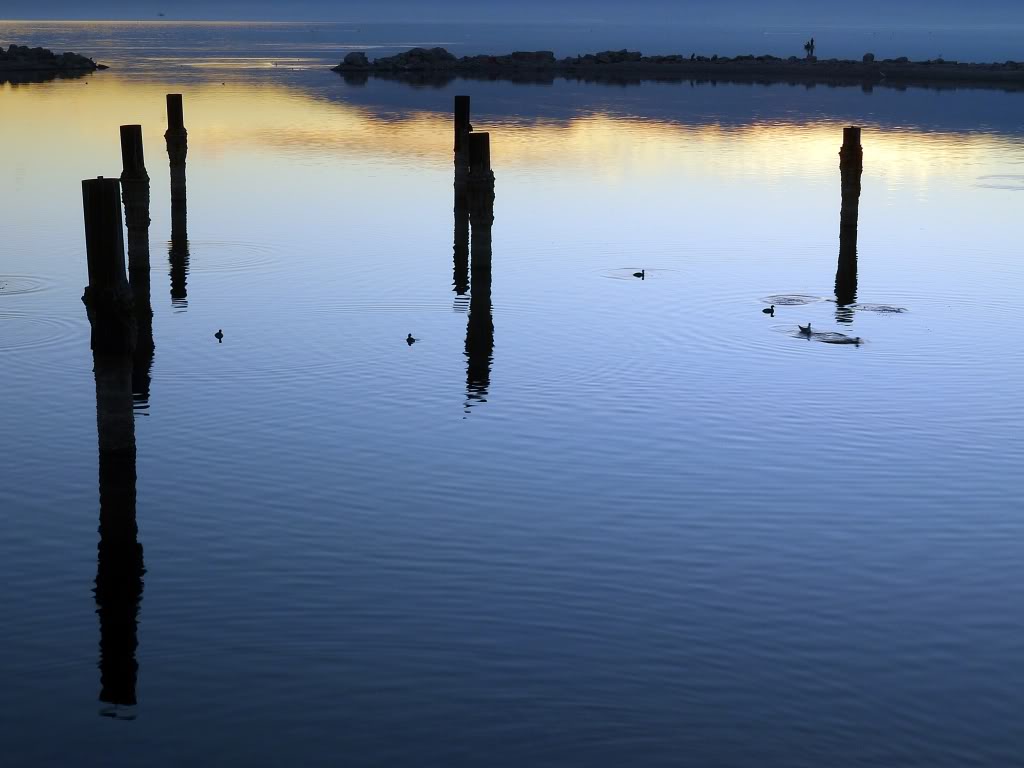 Last shot of the day, just south of the seawall, my first long exposures ever taken! I'd appreciate opinion on whether the crop or the original is better. Thanks! 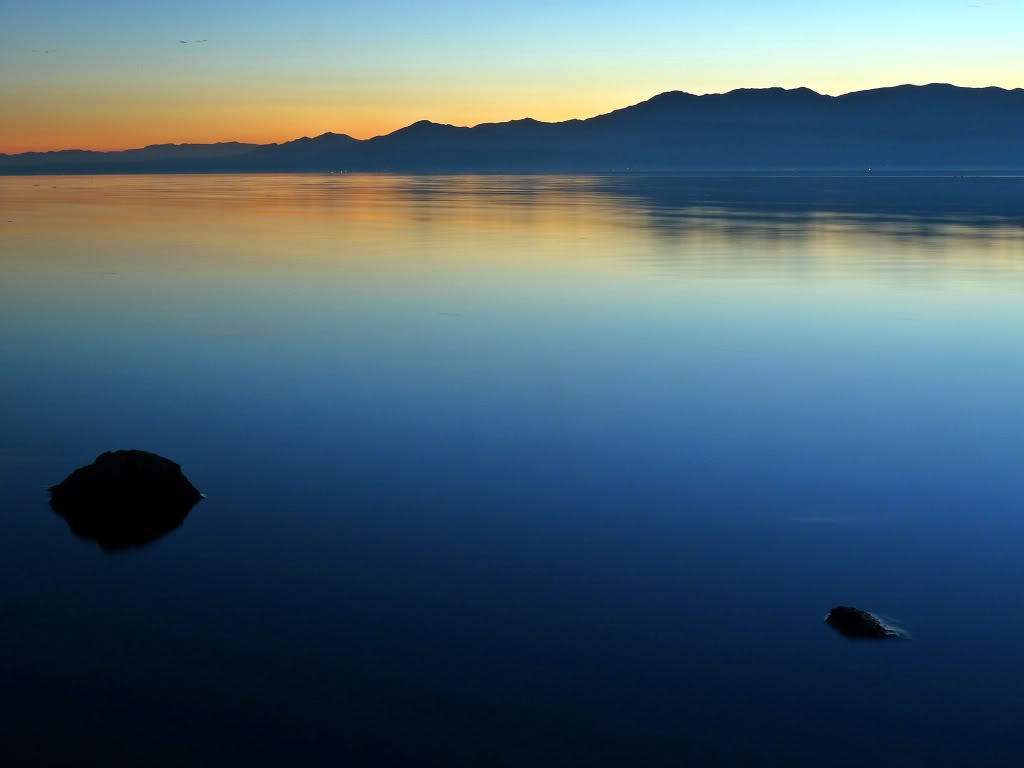 I would not complain mate, there are some very good shots in there - well done - great atmosphere

Hard or not, you've conveyed the atmosphere of what is obviously a unique and amazing place, many thanks for posting those. BTW the small birds with the upsloping tails in the photographs with the posts are Phalaropes, they would have been spinning around on the water snapping up the insects (once an ornithologist, always an ornithologist, sorry about that).
Looking forward to your next visit.

The crop reminds me of an aerial photo of islands.

T3, first let me say that I'm with Bill - you have nothing to complain about! These are both beautiful and interesting and not at all boring or typical. Frankly, the birds make these shots even better in my opinion but that's easy for me to say sitting here...not having slogged my way through fish corpses and guano....and everything else it took to get there.

I also want to tell you how much I enjoy your writing style - very entertaining!

In all seriousness, these are lookin' might good, T3 - and I do mean it about the birds being a major plus, as well!

As for the last two, I believe I prefer the first...however, the second one of the "two islands" might turn out to be even better if you did a bit o' tweaking. Play around with it some more, perhaps?
D

A set Of lovely shots. I too think the birds add to the pictures. I particularly liked the one with the pelicans. The colours and composition are perfect. I prefer the uncropped version of the last one.

Very nice - I particularly like 2 and 3. I think the birds add something though it's true there are a lot of them in #1. Maybe bring a shotgun next time. On the last pic I prefer the uncropped version - the stones benefit from the balance of the land mass and I like the fade from blue to gold.

PS Just one thing you might like to PP - on the shots with a brighter coloured sky I can see something like a little bullseye about a third of the way in from the left and just down from the top.

PPS Would love to see a shot of the dead fish - but maybe that's just me.
D

I think they're wonderful shots. They may not be what you'd hoped for, but they are very nice!

The pics are superb, birds or no. Of your last two pics I prefer the uncropped version; in the second the two rocks are too close to the edges of the frame to yield a unified composition.

Dont do yourself down, those are great shots, it comes across as a very beautiful place and that is down to the photo's you took to show us..
B

I need to agree with the comments already posted regards the birds. I really do think they add to the already very nice images. Beautiful set of captures!
Bruce

Very good shots! Since I have been through there a few times never have I ever viewed these at this spectacular time!

D
Sometimes it's hard to choose

Introducing Micro Four Thrids to the "Next Generation" of Photographers