I mean it! I recently had the "pleasure" of browsing through a few photography/camera guide books, and I almost lost my lunch digesting the misinformation I encountered doing so.

A particular annoying false "fact" that keeps being repeated in such reading matter is the claim that the dynamic range of your camera and images decreases with rising ISO numbers. This is wrong, as every reader of my book already knows. Looking at my book's JPEG ISO series at Index of /XPro1/Abbildungen/ISO-Reihe - ISO Test Series (yep, you can look at this stuff for free, no need to buy anything), it's easy to compare the sample images at ISO 200 and ISO 6400. You can see that the ISO 6400 sample covers pretty much the same dynamic range as the ISO 200 samples. In other words: The ISO 6400 sample (almost) doesn't show more blown highlights or blocked shadows than the ISO 200 sample.

Yes, I know: It's true that the dynamic range of your camera's sensor decreases with rising ISO numbers, but you don't render images with a sensor, you do that with a camera (or an external RAW conversion software like Lightroom). Your camera isn't just a sensor, most of it is image processing. This image processing takes care of keeping the practical dynamic range intact over the full ISO bandwidth. Yep, those engineers are smart, they know their stuff.

How does the camera (or the RAW conversion software) do it? Basically, it uses the same method that is used for the DR expansion function: underexposure combined with tone-mapping. You can read all about it in my book and most of it here for free.

Here comes the really fun part: Your Fuji APS-C camera offers MORE dynamic highlight headroom at ISO 3200 and yet even MORE again at ISO 6400 than between ISO 200-1600. Really! How can that be? Isn't that....totally crazy?

So if you happen to overexpose an image at ISO 1600, you are in a tough spot, because the camera is recording the actual overexposure in the RAW file. Highlights will be blown and be quite hard or impossible to recover. However, at ISO 6400, it's all peachy, because your "overexposure" is actually an underexposure of 2 stops – the difference between ISO 1600 (the actual RAW data) and ISO 6400 (the RAW data the camera pretends to record). This means that you can easily recover blown highlights by simply moving the exposure slider in your RAW conversion software to the left. Shooting at ISO 6400, two full stops of highlights will magically reappear this way, w/o any visible quality loss. At the -2 EV setting of Lightroom's exposure slider, your ISO 6400 image will look exactly as it would have looked if the shot was taken at ISO 1600 in the first place (using the same aperture and shutter speed). No difference at all.

Let's illustrate this in a practical example of my messy desk. 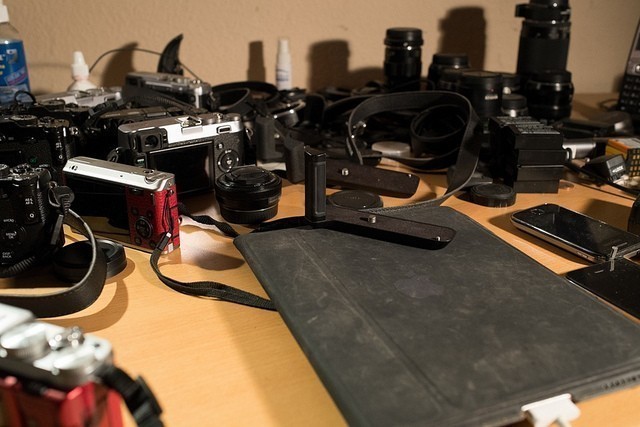 Looks okay to me, no blown highlights. 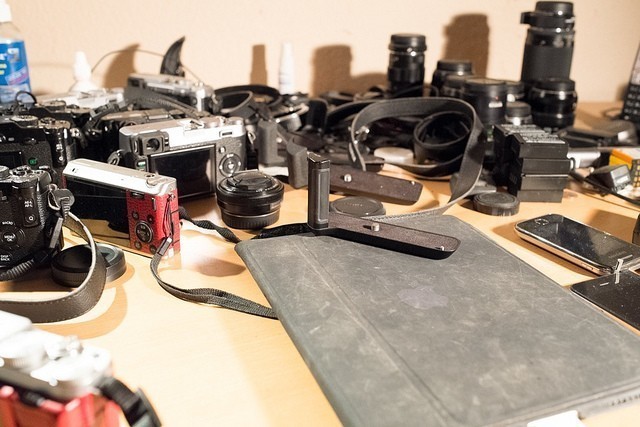 Yikes! This is obviously overexposed by two stops. Many people (probably those reading the "expert" books) would throw this shot away, because they'd assume that no RAW converter on earth can recover two full stops (EV) of missing highlights.

Well, let's give it a try, anyway and move the exposure slider 2 EV (two full stops) to the left in Lightroom. Here's what happens to our overexposed image: 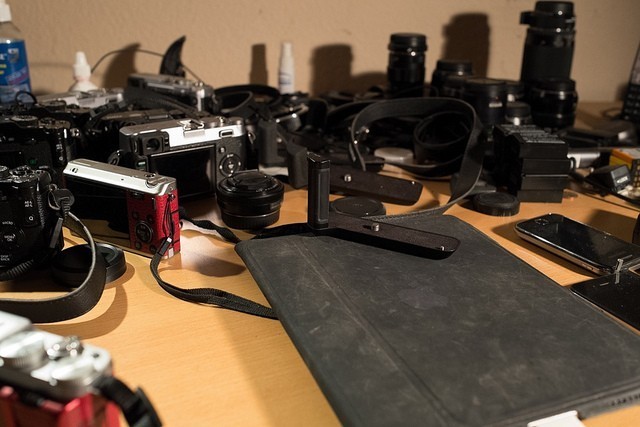 Wow! It's magic!
Nah, it's simply a matter of common sense and knowing your camera.
What we see here is a result that, even though it was shot at ISO 6400, is pretty much identical to our first result at ISO 1600. That's because both pictures resulted in an ISO 1600 RAW file, even the one that was shot at ISO 6400. We basically recorded the same RAW image twice, but a tag in the RAW file made Lightroom push up the ISO 6400 file during import. The camera's JPEG engine does the same. All we needed to do was push it back down by manually moving Lightroom's exposure slider to the left. It's not rocket science, but it's quite effective.

Now, it's important to recall that this "magic" only works beyond your camera's actual (aka physical) ISO range. Repeating the experiment at ISOs 400 and 1600 (another two stop difference) leads to quite different results: 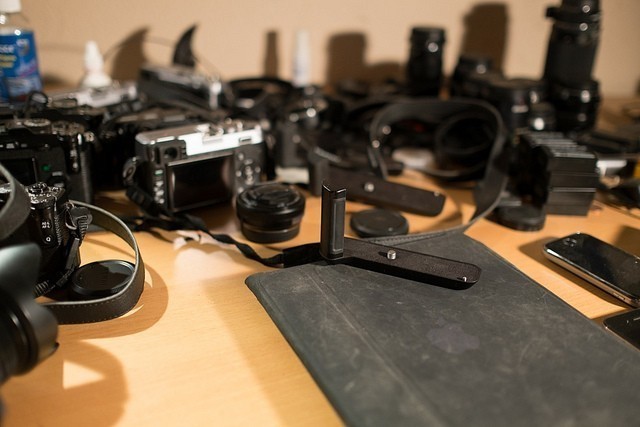 Looks okay to me. Here's the same subject at ISO 1600, using the same aperture/speed as in the ISO 400 sample: 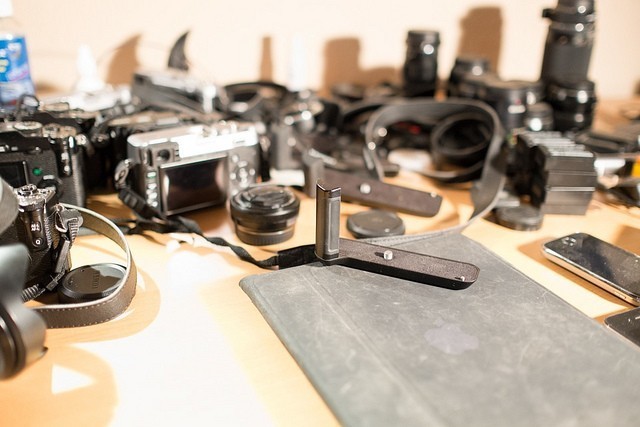 Grossly overexposed, as intended. So let's move the exposure slider 2 stops to the left in order to "recover" the shot: 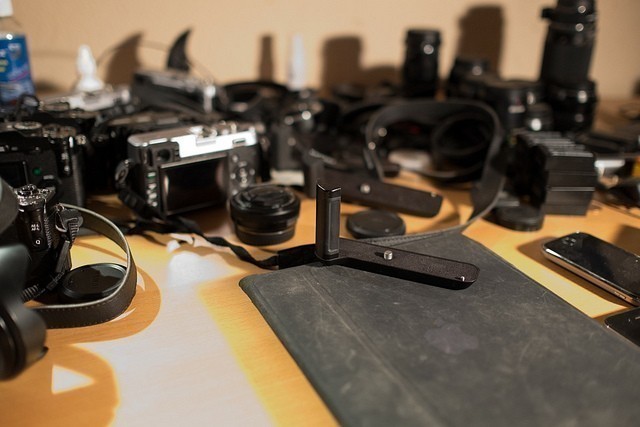 Oh well, Lightroom tried its best, but there's no way even LR can recover (aka "guess") 2 stops of missing highlight information. Obviously, the RAW files of the ISO 400 and ISO 1600 shots are different, they contain different data, real RAW data that was generated in the camera by a mix of analog and digital processing. The ISO 1600 and ISO 6400 images, on the other hand, aren't really different. Their image data is the same, only the metadata differs. The metadata contains instructions to the RAW converter telling it how to digitally process the RAW data. In the case of the ISO 6400 RAW file it tells the RAW converter: "Push me up by +2 EV, but don't tell the user, 'cuz it might just confuse him."

Now we know that at ISO 3200 and 6400, we basically have 1 respectively 2 stops of additional highlight headroom that doesn't exist at ISO 1600 and lower. That's good to know, because it means that we can always shoot with DR200% at ISO 3200 or with DR400% at ISO 6400. As you know from reading my book or the article linked above, DR200% underexposes a shot 1 stop, and DR400% underexposes it 2 stops, creating extra highlight headroom. But your camera is doing this (the underexposure) anyway at ISOs 3200 and 6400, so the DR setting doesn't matter. Only the tone mapping changes, preserving more highlights with increased DR settings.

So practically, if you are shooting a night scene with bright lights and strong contrast at ISO 6400, simply set the camera to DR400%. It doesn't make a difference to the RAW file, which will always be our usual ISO 1600 RAW file, no matter what. However, it does make a difference to the in-camera JPEG processing, as DR400% will smoothen the highlights and preserve your highlight tones. If you find the result too flat, simply reprocess the image in your camera with DR200% or even DR100%. Basically, shooting at DR400% and ISO 6400 gives you three different in-camera JPEG options with different highlight-preserving tone curves to choose from, while shooting at DR100% will give you only one that doesn't preserve anything. Important: Unlike shooting with the DR function at lower ISOs, there will be no quality differences between the three options regarding shadow noise at ISO 6400.

Wow, I just learned a bunch of stuff I did not know. I think I you just convinced me to buy your book Rico

Great, more soup for me!
P

THE Rudy Greenspan? I had no idea...

(Sent from my EVO via Tapatalk)

petach said:
er.....I understood what I thought you said, but what you said wasn't what I thought you meant! :0) My head hurts. Gimme a day or so to digest, but I trust you. Thanks for the heads up, will try it out. That is the only way I can digest.

I feel the same way...but I have a "math block".:redface_old: I'll stay after school if I can go horseback riding Mr. Greenspan?!

I'll be glad to! I don't like to picture Mr. Greenspan in my mind.

just ran across this bit of info here: 12.54 stops of range.

romi.gilles said:
just ran across this bit of info here: 12.54 stops of range.
Click to expand...

Very nice, not bad at all (nor is it surprising considering what I've seen in comparison to other cameras). I'd wager to say that's either unnoticeable or very minor appreciable difference over some of the top of the line sensors with 14+ stops like the D800.

OHHH!! So this is where the whole "Rudy" thing began!! LOL!
F

Hi Rico,
So now that Fuji has finally given me the functionality to set a minimum shutter speed while shooting auto iso, and I can now shoot in aperture priority mode, is there any advantage/disadvantage to setting my X-Pro1 to DR-auto? Or should I leave it set to DR 100?

Totally depends on what you want. If you like JPEGs, DR-Auto (or a manual DR setting) is your friend in cases with high dynamic range and highlight clipping. My latest column covers this: http://www.fujirumors.com/exposing-right/
Y

I tried but couldn't replicate your example with the X100s files. i had lost the highlights on the ISO 3200 photos more that on the 1600 ones.

Could it be that there is a difference between the X-Pro1 and the X100s?
I thought they are the same regarding imaging pipeline.

No difference, but you should use an easier converter like Lightroom. I can't comment on RPP, but I am sure it also has an exposure function where you can correct the brightness.
Y

Sorry for the confusion. I wasn't clear enough.

I used Apple’s Aperture for the raw conversion, and indeed I lost highlight data between the 1600 and 3200 ISO exposures.

Or did i miss something?

Aperture can't deal well with DR RAWs, so it's pretty much useless for serious RAW conversion of DR400% shots. RPP is miscalibrated (at least the version I tested was), but so is Lightroom (at least for the M1 and E2) with regards to certain high-ISO DR combinations, but that's easy to deal with by moving the exposure slider until the brightness suits your goals. I don't see much relevance in how bright an image is on import. It can be correct (like with the X-A1 in Lightroom) or miscalibrated (like withe the X-M1 in Lightroom). I am only interested in the end result after I have adjusted my sliders. You have to stay pragmatic.

Of course, the continuous miscalibration of certain "supported" cameras on import proves that the folks at Adobe are either incompetent or ignorant (or maybe both), but this is not really surprising. It's not like Apple would do a better job (their Camera Raw misinterprets DR metadata for at least 3 years, and nobody at Apple cares). Capture One is actually better, but they take forever to support new cameras.

A sneaking suspicion about dynamic range . . .