Leica Thread to ask "What do I have, How does it work, and How much might it be worth?"

Most camera forums get a number of newcomers that have inherited collectible camera gear, or have lucked into it at an antique store, garage sale, or estate sale.

This thread is to ask questions, post pictures, and get some feedback on it.

Alright, I got a Leitz compartment case a while back, but it matches none of the outfit cases in the collector's guide 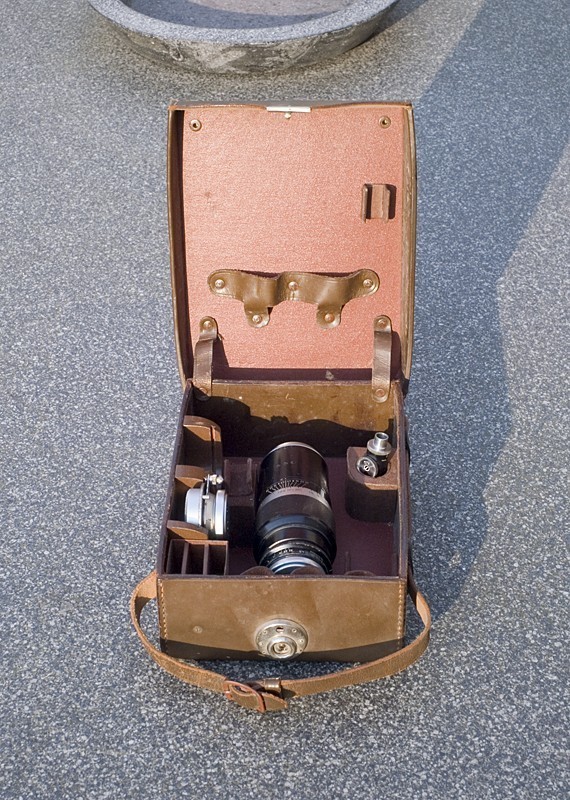 It appears it can hold two short lenses, the 135mm lens the wintu and fodis finders and a few other things. The slots appear to small for A36 filters. And there's no room for a camera in there.

Anyone else have clue to what it can be. It might be for a microscope perhaps, but I haven't seen leather cases for those before.

I would expect a microscope case to be made of wood.

Morgan and Lester do not list field cases. Nikon guides by Abbot and Cooper covered cases as well, to a lot of detail.

Two possibilities: it is for something like an Enlarger, OR someone customized a field case. I've done the latter.

The way the screws are sunk through the bottom of the case hints at it being a converted case as you say.

I think I'll design a new lay-out for it and let my uncle transform it into a usable case. It only cost me $10.
M

I would like help in valuating some items I picked up at an Estate Sale. Honestly, I am not a camera collector, just picked them up for value. I was reasearching the lens and landed on this site, and Brian had a great article on my lens and its rarity.

I have a Nikon M (unsynch), Made in Occupied Japan. The Body is in very good condition. The leather only has 1-2 small bubbles on back where the screw is, which I understand is typical of this camera. The shutter still works great, all the mechanisms seem to be in working order. I am not a professional photographer, so really don't know how to use all the settings.

It also has a Nikkor S.C 1:1.5 f=5cm Nippon Kogaku Tokyo No.907479 lens. This lens appears clean and unscratched. It was owned and used by one career military officer in the Air Force that acquired it when he was stationed in Japan and the UK for 20 years in the 40's and 50's. He apparently stored it very well for the last 60 years. There is a small indentation on the outside rim of the chrome part, that does not show when looking through the lens. I would assume that it was dropped and dented the metal, but there are no scratches. The metal housing really looks new, no scratches, the black numbering is still vivid, no fading. It has a silver Nikkon Kogaku lens cap that appears to be felt lined.

I am going to include some pics. I would appreciate any insight on value or just any historical information of value.

Since I am not a camera enthusiast this camera is really wasted on me, and should be in the hands of a collector, so I do plan on selling it. I would love to just load it with film and try it out, just for the enjoyment of use, but don't want to do anything that could decrease the value, and honestly it is more camera than I know how to use.

Marie- I'm not sure why the images did not show up. Click on the "Go Advanced", scroll down a bit and you will see "Manage Attachments". This allows you to upload from your computer.

The camera sounds really nice, and one of those finds that everyone hopes to luck into. This is how the woman that I bought my Lens from on Ebay did it as well, chance taken on buying a lot. She had a Salesman at a camera shop check out the camera, listed as inspected but not tested.

She listed it twice with a $1500 Buy It Now for the Leica mount version of the lens along with a made in occupied Japan Canon III. I've seen one other LTM 5cm F1.5 Nikkor listed at $1500 (No camera) from a pro dealer that I know personally, it was not as nice: BUT you would not know it from her Ebay auction pictures. Check the link for what I mean. The seller offered money back after inspection, and had a lot of non-photographic sales. She was more worried than I was as the camera shipped, I let her know within 5 minutes of receipt that it was gorgeous, and her daughter used he money to pay off her car.

The Nikon M body is worth more than the Canon III. The S-Mount version of the lens is "around" the same value. A little over 300 were made in S-Mount, and the Leica mount is usable on the modern Digital cameras. But Nikon collectors- don't care.

I would have the camera checked out and tested with film. I would "guess" an Ebay auction would bring $2000~$3500, depending how crazy things get and how well the camera and lens checks out. Nikon RF prices are down ~40% from their peak of 10 years ago. Film is not as popular, and Nikon never came out with a Digital rangefinder as did Leica.

I've read some people describe this lens as not being a good performer, they are wrong. I used it on my M9 yesterday at Gunston Hall, the colors are beautiful. It is every bit as sharp as the Nikkor 5cm F1.4 that replaced it.
M

Thanks Brian. I edited with advanced, and it looks like it worked.

That is in nice condition. The filter ring can be straightened by a professional, using as special tool designed just for that.

BUT: I would leave this one in as-found condition, let the new owener take care of it. It is a real trophy item.

Picked this up this massive piece of brass at a flea market in Amsterdam yesterday,

I'm pretty sure it's a magic lantern / projector lens, possibly rebranded by the Ed. Liesegang company from Dusseldorf or
one of their own production lenses.
It does not appear to be a petzval (closer to an aplanat design).
Can't find a lot of info on it.

I do not know much about 19th century lenses,

Friend of mine recently picked up a Soft Focus filter in A36 mount.

It's a regular black clamp-on filter frame with "E. Leitz Wetzlar Germany" on it.
The filter glass itself concists of what looks like etched concentric rings.

He said it looks like an original filter, not a DIY job. I was unable to find this particular filter in any of my books.


Can anyone shed a little more light on what this thing is? Does it actually have a leica-code?

My 1942 edition of "The Leica Manual" by Morgan and Lester mentions an effects filter for soft-focus. It's also referred to as a "Fog Filter" to soften the image. No Leica name given, and it is suggested to use the filter in the darkroom. Remember that Leica lenses used off the camera could be used on the enlarger. The filter section is rewritten in later editions, could not find it in the 1950s book.

Face detection woes - how does it work?

B
Selling your gear and how does it work for you?
2

G
Canon G1X does exactly what I ask of it.