To our flooded friends in the UK

While I knew many parts have been experiencing terrible rains and wind, I only just saw some aerial photos from the BBC news on our PBS (public tv) channel. Wow! I feel so badly for all who are impacted by these rains and the overflowing rivers.

Please check in when you can. I'm surprised not to have seen some photographs on the site, though I may well have missed them.

I promise not to complain about our snows, after learning mor about your floods!
R

We haven't heard from Barrie - hope he is ok

Thanks BB, most of the worst is south of here, we feel so helpless that there's not much we can do to help those affected. Every day it seems we get warned to brace ourselves for more torrential rain as ever more storms hit our coasts.

We had our worst night here in the north west last night, with winds blowing up to 90mph. We only lost one fence panel so got away very lightly, a lot of people lost part of their rooves and many trees were blown over

But hey, we're Brits so we'll get over it and build everything back again good as new. It may take a while this time but we'll get there.

The main road near me is closed. I live on top of a hill so flooding is not a problem but the water treatment plant is not far and in the same road as the closed flooded road. The water table is so high that another foot and raw sewage will spill out onto the roads etc. They are having to pump fresh rainwater a mile down the road and dump it in a subway (Not train subway, just a walkway under the street). So even though I live on top of a hill it has come close to having no water or sewage!!!!

My journy to work on the train passes locals who have 3-5 foot of water in their back gardens! My heart goes out to all those affected!
K

Yes... where *is* Barrie? I imagine his city is copping a pounding.

Hi all and thanks for your concerns. Most of the local damage in and around Plymouth has been storm related and due to very large waves, some buildings have suffered with the sea in effect coming in at one side and going out the other, sweeping all before it. Likewise when damaging high winds/waves coincide with high tide there has been some coastal flooding. Being quite hilly any flood related problems due to high river levels are rather localised, in contrast to further east where flooding has been widespread and extensive where river flood plains have been overwhelmed.

Currently Plymouth, the 15th largest city in the UK, along with the rest of south Devon and the whole of the county of Cornwall has no rail connection with the rest of the UK due to a recent storm washing away the sea wall at Dawlish which carried the rail line along what is a picturesque but very vulnerable stretch of coast line. Delays and short term closures are not uncommon there when onshore winds and high tides coincide causing waves to wash over the line damaging trains and washing ballast away, however this time it has washed a stretch of the whole embankment away leaving the line suspended above the sea with no support whatsoever.

This photograph, whilst not taken recently, shows one of the south Devon villages that has suffered damage. This scene is much less extreme than that experienced in a recent storm. 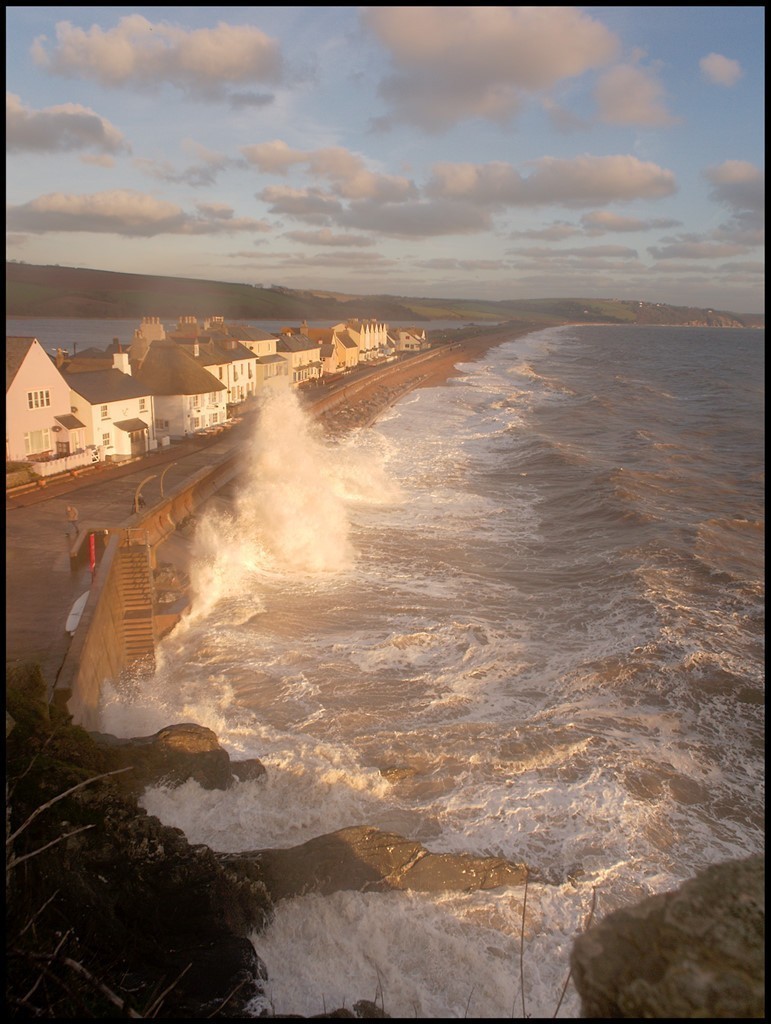 Most of those houses facing the sea have suffered damage, one resident described how the sea first came in a FIRST floor window and cascaded DOWN the stairs, before washing out at ground level. A friend who lives there, but behind that row of houses facing the sea, tells me that when the sea crashes against the sea wall, his house shudders since they are built on piles rather than foundations and that in extreme conditions items will fall off shelves.

As I write this the rain is once again beating on the window and the wind is picking up, currently south east which leaves the village seen above very exposed, it's due to back south or south south west later and increase in strength, which will coincide with high tide early this evening, not good news for the south coast.

We are being told that this is thought to be the last of the extreme storms and that the weather will return to a more normal winter regime at least for a few days. This week will have seen us getting a total rainfall in excess of the normal monthly average, so back to normal will come as a relief.

Morning Barrie, good to hear from you - I was a bit worried because you had not been on the forum for a few days
P

I was born & brought up in the part of NW Surrey now suffering inundation.
Back then, of course, it was all fields ... ...

I can certainly remember large floods in the early 70s, bad enough so that I saw people kayaking round some of the streets of Chertsey, and enough heavy rain would regularly see the flood plains around the Thames with plenty of water on.

The current situation seems to be on a much greater scale. The UK has been notoriously lax with controlling development on flood plains, and NW Surrey has seen very strong population growth and thus housebuilding in the past 40 years. It would not surprise me to learn that the two are connected.

These days, I'm on top of a 700' hill in North Dorset, about 30 miles from the Somerset Levels (which I used to traverse with monotonous regularity for work). Clearly I'm not going to get flooded, but many of the routes I would normally use into Somerset and down towards the Dorset coast are not easily passable in my car. For those who have to use those routes it will be unpleasant and limiting.

It's a pretty bloody situation over much of England at the moment, and it's not improving much. Government agencies have been very tardy in their response too. As things stand today, they are doing many of the right things. But as far as the Levels is concerned, it should have been done weeks ago. That's a penalty of being a low-density population area (there are other factors, of course, mostly political and thus orf limits)

It does seem worth being thankful that so far, the number of deaths directly attributable to the floods and storms is still (I think) in single figures.

When I lived in Somerset in the village of Combwich by the River Parrett downstream of Bridgwater in the 1980's we paid an additional charge on our local property tax that went to the local drainage board for maintenance of the waterways across the Somerset Levels. I'm given to understand that when the Environment Agency took overall control of that activity in the 1990's that all the wonderful old British built dredging equipment was scrapped, so to implement such work again I suppose we'd have to import suitable equipment nuff sed!

I used to drive into Bridgwater from the Muchelney direction almost weekly, and almost always stopped at Beer Wall/Langacre Rhyne just to look and take the odd snap. Here's an example from February 2011, looking South-West:

View attachment 85812
at beer wall. again by _loupe, on Flickr​
This is very close to where the gigantic Dutch pumps have been installed this week

If you were at this scene today, all you would see is water, no land at all. And you'd probably have to be standing on the roof of your Unimog if you didn't want to drown
P

This is looking in the other direction from the same spot, North East, in November 2010. It looks pretty full then and was running fast and turbulent. Again, this is now just an inland sea,

Come August and we'll be in the middle of a drought complete with stand pipes in the streets - such is the uncertainty of our wonderful Brirish weather. We Brits do have a fixation with the weather but with good reason

I guess being a smallish island exposes us to everything that comes in from the Altlantic or the North Sea, which makes our weather ....erm ...."interesting"

Edit: sorry Bill, you beat me to it - never noticed your post on a new page

Got off lightly here in Scotland.

Hope everyone down south is OK and doing well.
P

Mind you it's good to keep a sense of proportion: I just turned the radio on and heard an interview with the mayor of Tacloban in the Philippines; When the typhoon hit last November, thousands of people were left without any shelter whatsoever and all the emergency services were themselves paralysed & unable to help.

Which isn't to dismiss how horrible it all is for those affected here, of course, but it isn't the end of civilisation either.

I've seen the pictures on BBC America. It reminds me of a while back when the Mississippi was out of its banks and the Midwestern States were taking a hit. You can stay safe if you're sensible, but water just ruins everything.

Someones amateur video showing the storm mostly at Torcross, the village shown in my still photograph earlier in the thread.

This one shows one of the last trains to get through at Dawlish before the line was destroyed.

And finally a video showing the damage done at Dawlish.

I have to say around here at least it's all a bit surreal. I have clients I am not allowed to visit (in Staines), because their offices are inaccessible. I actually live on a hill, but all around there are roads shut and towns just a few miles away are under feet of water. Journeys over any distance have become a lottery because roads are either closed or overloaded with diverted traffic. We have invested in some bottled water - the risk where we are is more from the sewerage systems becoming overwhelmed and contaminating fresh supplies - but otherwise there is little one can do but watch and wait. I have lived in the Surrey area all my life and have seen many floods over the past 50 years but I have never known it as bad for as long as this. The water table is now so high that people living some distance from rivers are finding groundwater rising through their floorboards; in short, nobody is safe.

When, by the way, did Staines become "Staines-on-Thames"?
It was always just plain "Staines" when oi were a boi.

The phrase "get rid of ugly stains" does spring to mind.

Mind you, I suppose it's now Staines-in-Thames now, isn't it?

My God, I think I'm turning into BillN ... someone shoot me.

pdh said:
When, by the way, did Staines become "Staines-on-Thames"?
It was always just plain "Staines" when oi were a boi.

The phrase "get rid of ugly stains" does spring to mind.

Mind you, I suppose it's now Staines-in-Thames now, isn't it?

My God, I think I'm turning into BillN ... someone shoot me.
Click to expand...

(on another topic - how big should the alula on a Parus major be, do they vary?)

To our friends in Texas - please check in! Wildfires and drought.
2