Travel: How many memory cards do you carry?

I'm going on a big trip for a month to France.

Loads of photo opportunity and variety of environments as I'll be hiking as well as being tourist.

So apart from still not deciding if I will lug the DSLR as well (doubtful) I'm not sure how many memory cards to take with me?!

I haven't decided if I should take jpeg or raw+jpeg so I know that will be a factor.

The last time I did a big trip I took two cameras with two cards each and a portable hard drive & card reader unit that I could back my cards onto. But can't seem to find one of those units anymore.

How do the rest of you cope with this issue and decide how many cards to carry? Is extreme better than ultra etc? I usually just go for the speed if it.

Thanks in advance for sharing.


Irene,
Have camera will travel & shoot!

99.9% of the time I have just the one card in the camera. On long trips I'll take two per camera, and rotate them on a daily basis. I'll also back up en route. Ultimately, however, this question is impossible to answer because it depends how profligate you are with your shooting. I am quite parsimonious so what works for me may not work for you!
I

In Italy I had two cards per camera and at least two batteries for each camera plus an external hard drive [I do not have a laptop, used my husbands work laptop to port images over to my external] I emptied photos onto every evening. I never filled up a 16GB card however I did have to swap batteries midday. I shot all in RAW btw. You can't go back to take a shot if you lost info via the in-camera jpg software.

The batteries point is well made - I think they are more of a constraint than memory cards. I always carry a spare.

one card can last me months, but obviously I take fewer photos than most and rarely shoot RAW. If you have the ability to back them up pretty regularly I don;t know why you would need more than one...I'd still have an extra in case of a failure.

i stopped carrying 3+. it's always good for backup. but recently, i've been carrying one eye-fi pro and one sandisk extreme pro.

one is really good enough. i backup every evening.

(Sent from my EVO via Tapatalk)

Man, I would never travel without a good backup setup. I have one of those Wolverine card-reader hard drives that was great when I was just using an iPad and when I was just using cards and nothing else. Now I take a laptop and a small backup drive. I was surprised to see that they don't seem to still make those portable backup drives, or at least B&H doesn't seem to sell them now. They're pretty damn useful, but I guess in the days of tablets and laptops, they probably stopped selling...

But the short answer is I'd take SOMETHING other than just a lot of SD card capacity to keep my shots safe...

I take too many but still fear not enough. I have a 16 two 8's and four 4's. for my Aus trip of 2 months, I invested in a 500gb portable drive and download the days "takings" onto it. My iPad is a 64gb v2. That would normally be enough for most people, but I am a terrible hoarder of useless photos that may magically be cured by a future piece of software..

I've just hit the end of month four of a five and a half month holiday and have only used the one memory card for each camera that I am carrying (a mix of 8 and 16Gb cards). I have a few extra 4 and 8Gb cards for emergency spares but so far have been backing up (raw + jpeg) to a 320Gb Netbook and a 1Tb portable hard drive
I

Ray Sachs said:
I have one of those Wolverine card-reader hard drives that was great when I was just using an iPad and when I was just using cards and nothing else. Now I take a laptop and a small backup drive. I was surprised to see that they don't seem to still make those portable backup drives, or at least B&H doesn't seem to sell them now. They're pretty damn useful, but I guess in the days of tablets and laptops, they probably stopped selling...-Ray
Click to expand...

Maybe they don't have the backup drives like you had Ray but they certainly have external hard drives that are extremely portable. I have a 1 Terabyte Seagate that is maybe the size of two decks of cards side by side and not quite as thick. It just doesn't have a card reader in it. Connects via usb and you open it like a folder on your computer etc..

I only take one because the thought of editing hundreds of 45MB+ RAW files would turn me off photography. This thread has made me realize that I've been breaking an important rule: Backing up! I've been fortunate so far but I will certainly remember to bring an old laptop in future travels (I don't like to bring any other expensive equipment aside from my camera on trips).

Isoterica said:
Maybe they don't have the backup drives like you had Ray but they certainly have external hard drives that are extremely portable. I have a 1 Terabyte Seagate that is maybe the size of two decks of cards side by side and not quite as thick. It just doesn't have a card reader in it. Connects via usb and you open it like a folder on your computer etc..
Click to expand...

Oh yeah, I know. I have a little transcend hard drive that I was backing up my laptop with in Italy. But you need a laptop or something to plug those puppies INTO. With the little card-reading drives, it was a standalone backup device that was a good cheap way to buy some piece of mind. Traveling with a laptop they wouldn't make any sense - a small portable hard-drive is the clear way to go. But when you're trying to get by WITHOUT a laptop, they make a HUGE amount of sense...

Currently I carry only use one 8GB EZ-Share WiFI sd card. I have a spare 32GB in case of failure, but that rarely gets used. My phone has about 70 GB of free space though with an added microSD, so I just have the photos pushing from my camera to my phone. And when I go to sleep or have some serious downtime, I let the photos sync with my Dropbox. So it's like having a backup of a backup incase if the first backup ever gets full.
F

You guys musn't be looking very hard. Hyperdrives are still readily available in either with or without a drive included. I use mine both as a direct backup device and as an ordinary external drive for additional movies etc.

I carry about 120GB of memory cards and two hyperdrives when I travel. If I take a laptop then I'll carry only one hyperdrive. I'm more paranoid than most.

I'm another one who typically brings two cards and two batteries per camera. I might bring a third battery if a given camera is particularly hard on battery life. And while others may disagree, I'll only bring one camera on any given trip. But that's just me. 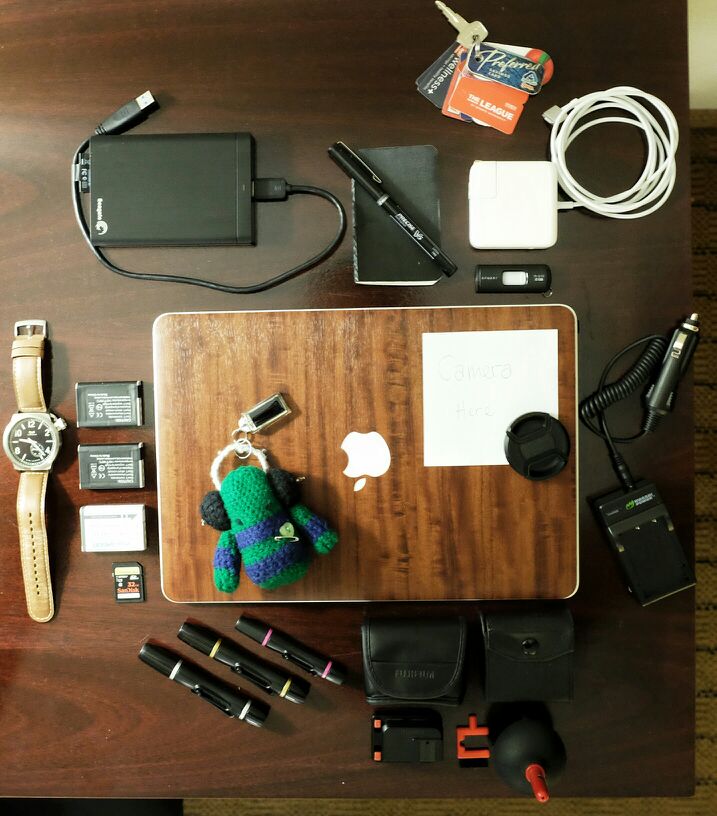 (Sent from my EVO via Tapatalk)
A

On an overseas trip, I can take up to 700 photos per day between two cameras. As I shoot raw, I use 32 GB cards, one per camera and two spare. I also have two batteries per camera. Each night, I upload to my trusty Nexto CF hdd with build in card reader, then format the cards for the following day.

Now that I'm shooting a lot more video during travel, I might need to add a third card per camera, as one 32GB card holds about 1.5 hours of 1080 50p IPB MOV footage from my GH3, or only 25 minutes on the upcoming Blackmagic Pocket Cinema camera if shooting in ProRes. I'll see how it goes, though.

I bought my Nexto Extreme in 2010, and their products were a lot cheaper back then. They have since moved to the professional video market, and even their photo storage units are between $500-1000 each. The pro-level video storage devices go up to $3500 for units that accept SxS and P2 cards that are used in big industry cameras from Sony and Panasonic. I've never used the Hyperdrive products but the reviews seem to be pretty good, and they are a lot cheaper than the Nexto products. The Colorspace UDMA looks decent enough.

I travel with 3xCFC (20GB) for the DSLR, 2xSD Xtreme (16B)for the G1X, 4x16GB Sandisk thumb drives, my EEEPC mini laptop (which has a terabyte HDD), a charge cable and a card reader and at least a spare battery for each camera. And I back up everyday. I'm a bit OCD about it. And I don't edit either - I had 8.5K photos to edit (majority in RAW) when I got home from my last trip The ones I wanted to upload to facebook or my website, I took with my phone because of the wifi connectivity

The minimum per camera is 3 cards. Mostly 16gb. So If I have 2 cameras - I'll have around 6 cards. It's better to be over than under. Extra batt is a must. Actually if an important travel, a spare charger won't hurt.

Archiver said:
On an overseas trip, I can take up to 700 photos per day between two cameras. ...
Click to expand...

On an overseas trip I average less than a dozen shots a day. Even if I go out for the day specifically to take photos at a target-rich event such as Hampton Court Flower Show, Chinese New Year or the Farnborough Air Show I'm usually below 100, and often below 75. The rest of my time I have the camera over my shoulder or in my bag as I enjoy the place I find myself in. I cannot conceive of taking 700 shots a day

How many gigabytes do you need?

How many webbrowsers you got aboard