With my kit being down to three lenses and two bodies. It wasn’t hard to narrow it down. Basically, take everything. X-Pro2 and 56mm in a Think Tank Spectral 8 bag with the peak design leash, 10 stop filter, shutter release, step up rings, and batteries/charger. X-E3 with 16mm/35mm in a think tank mirrorless mover 20 for the road bag.

Also, my middle offspring is taking his camera. So I’ll have access to a 50-230.

I keep second guessing if I should just roll with the X-E3 and just one lens in the tiny mirrorless mover. Any opinions on this? 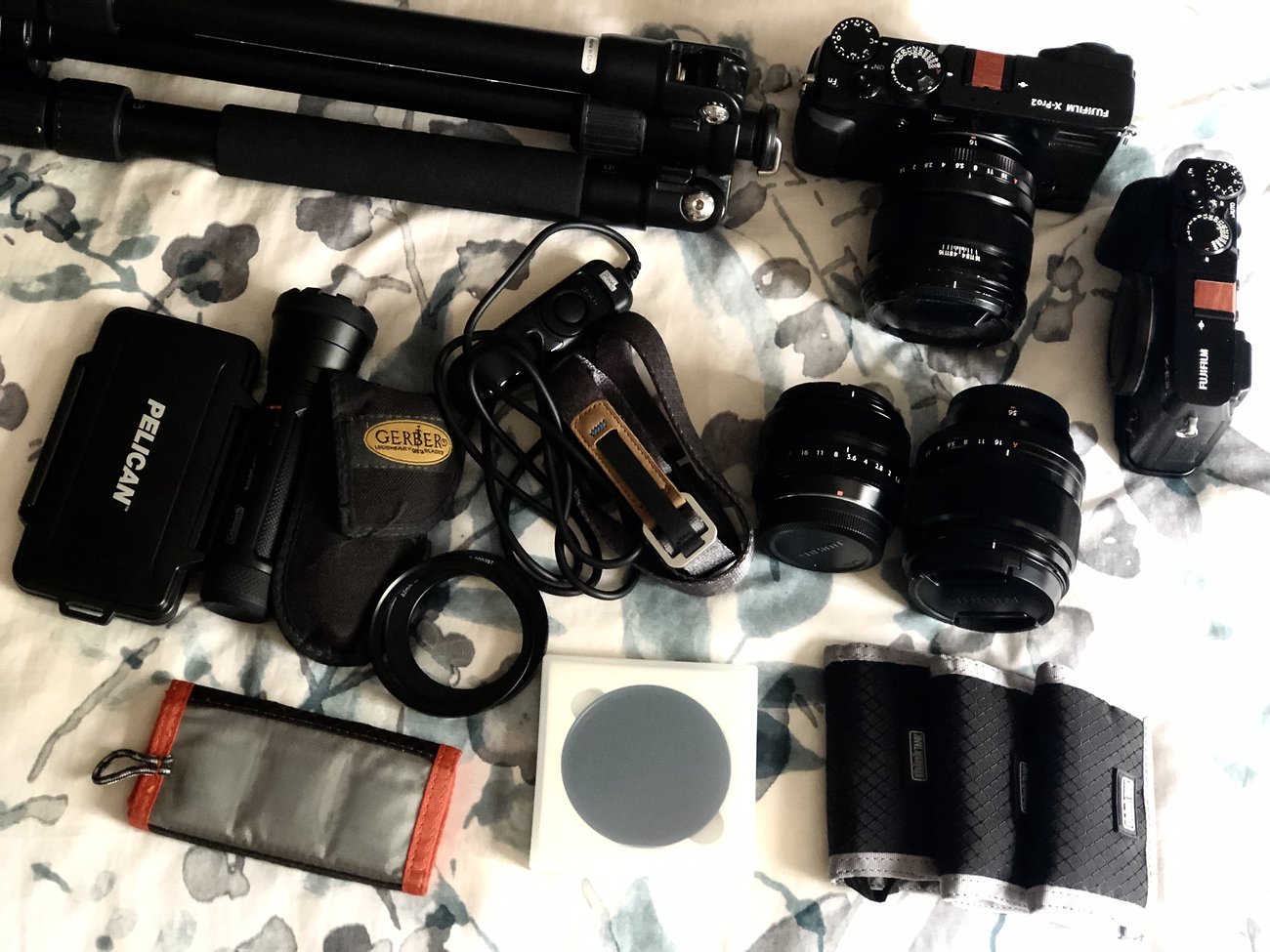 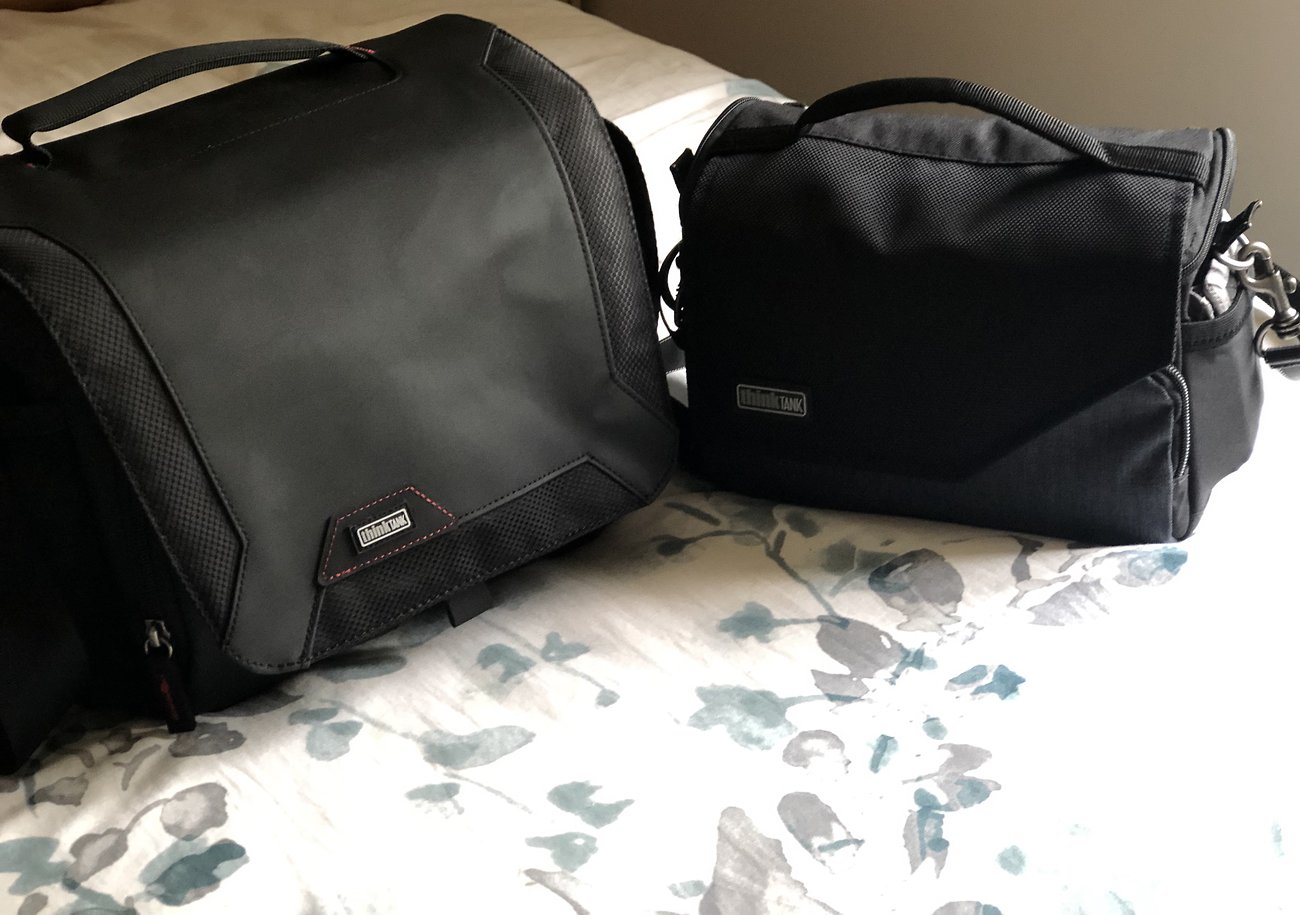 This also has me thinking about having a couple of the fujicrons for a travel kit. Great image quality, weather sealing, great af, and small. 16 1.4 with the 23mm and 50mm f2 lenses would be killer.

It all depends on how important the potential pictures will be. I never take an “important” trip without a backup body. Although anywhere in the US replacements from B&H or Amazon are 48 hours away.
K

You'll always worry that you might not have taken the "right" gear when you go, if you don't take everything. On the other hand, whats the trip for? If a family trip away, take less, not more. If for photography, take everything.

Different strokes, for different folks.
But the big 'gray area' is .... what kind of trip?
My personal rule of them is that I often tend to take too much with me - and wish I had taken less. This applies not just to life, but to camera as well. So, if I were in your shoes (and I'm not, but nonetheless) ... I think I would opt for Plan S (aka Plan Simple): an X-E3 and one lens in a tiny mirrorless mover.

On a recent trip which lasted several months, to México, I took just one camera: my relatively diminutive Canon G1x Mk III, which is definitely pocketable. The zoom lens isn't the fastest but it has been beautifully optimized to the APS-C sensor the Canon engineers squeeze into the tiny body, and it wound up doing more than 90% of everything I hoped it would.

Though, all things considered, a small-but-excellent mirrorless body, and one or two compact (pancake, preferably) lenses might also do the trick. But I also like the discipline of shooting with one-body-one-lens, so that tends to be a mitigating factor for me.

Years ago I got tired of lugging a relatively hefty Pentax DSLR body plus a few lenses around, which motivated the acquisition of some fine smaller mirrorless bodies + lenses (mostly Lumixes these days). Several body + lens combos would make fine travel kits....

Damn....the more I think about it, the more I realize that, sometimes, it's fun to bring options with one.

I didn’t think about writing what kind of trip. It is our annual family vacation to North Myrtle Beach. We’ve been making this trip since the early 2000s.

I do a lot of sunrise/sunset shots on the beach and in the marshland. So, the 16mm 1.4 is a must. Cause I will get out into the water with my gear.

I agree about having a backup body available on any trip. I’ve had need of it in the past. Usually due to me taking my gear into rough situations.

Because I couldn’t decide. And didn’t get to come back to this thread in time, I wound up grabbing everything. Except the hex key to pull the RES plate off of my X-Pro2 when not needed for a tripod. Because of that I’ve been shooting quite a bit with the X-E3. So I may have to find a store and get a hex key. But the E3 is a great camera.

I could get away with leaving the 56 at home easily.

You’re already there, so in this specific case it’s academic. But for the general question, I’ll say…

1. You specifically are good enough (as in, you know how to use that equipment to get things done) that you could make whatever you brought work, including just the XE3 and 1 lens… any one of those lenses. Yes, you’d give up some shots, but if you just accept that “this is what I brought,” and get busy using it, you’d make good images. And I will say that there are people who aren’t good enough to do that, who really would struggle to find inspiration without a myriad of options. You aren’t one of those people, which changes things somewhat.


2. When trying to narrow down what lense(s) to bring, I’ve personally found an odd conundrum between “logic” and “results” that I can’t fully explain. Logic tells me the 23 f2 pancake is -THE- most surefire safe bet lens to grab, all else being equal. It’s tiny, weather sealed, Wide Enough, Fast Enough, Sharp Enough, etc. Results after the fact overwhelmingly show me that I get better images with the 35 f1.4, and damn me if I can figure out why. So selecting just 1 is never actually easy for me. Selecting 2 makes it marginally easier, but I still have to think. Most frequent combo is Rokinon 12 and the 35 1.4. When it stretches to 3 lenses, the 50-230 is actually the most popular 3rd slot, believe it or not. The 23 f2 lens, the 56, and the 18-55 are all in a clump at the bottom of the list – each good for something, but possessing less “magic” somehow, and not getting selected as much.


3. Body-wise, the XE3 does everything damned well and damned fast, until it’s time to alternate between single and burst shooting. So sporting events, it almost HAS to be the old XT1. Otherwise, toss-up.

I appreciate everyone’s input. As Kyle says, at this point it’s academic. But it’s also helpful for the future.

Kyle I think you nailed how it is for me with the 23f2. I think the exact way as you do on it. And have the same results.

For me, the X-Pro2 is a must. Because I will always get into things which requires it’s build and durability. For example. I spent a good chunk of the morning waste deep in the ocean shooting surfers while the offspring were playing. I started with the 50-230. Then switched to the 16 1.4 for full weather sealing when the waves got bigger.

For everything else. I think Kyle’s assessments are spot on for me. 16/35/some telephoto. If Fuji would make a weather sealed 50-230 it would be perfect. Don’t change anything else, just seal it up.

I think that there are pictures that I miss because of this, but I console myself that I wouldn't have bothered to change lens anyway so probably would have missed it even if I was carrying the extra lens(es).

I find, these days, that I use the 56 almost exclusively for bands playing. Events. And a lot for portraits. But everything else is the 16 or 35. If not for trying to shoot surfers and birds, I would not have grabbed the kiddo’s 50-230.

(weather proofing the 50-230) For this weekend's kids triathalon event, with solid rain in the forecast (light sprinkles for 10 mins in reality), I took a clear plastic bread bag about 10" long, cut a slit in the sealed end that was just barely big enough to wedge the lens hood through, then taped the bag around the lens hood, leaving the open end of the bag back by the body. Figured my real danger was in getting drops on the lens barrel, then sucking it in as I racked in and out, zooming.

I’ve used rubber o rings on primes at the lens mount. But wasn’t sure how to protect a zoom.

I believe in taking the best for big family trips. Once your kids are big, all you'll have are your memories and amazing photos!

Now that this trip is over, I have a better idea for future travels.

Two bodies, so I'll have one for backup. With at least one being weather sealed. SInce they are so small, it's not really an issue. I can put the second body in the middle of my clothes in a bag even. And it's no secret that I'm not the easiest on gear.

The 35 was my day to day/walkaround lens. Although on this trip, a 23mm may have been a better solution for my walkaround. But then it could turn just as it does for Kyle.

Then for shooting surfers, birds, and other things. I did wish I had something weather sealed when I was shooting surfers because I was out in the water. Every time. I considered a 50mm f2, or 90mm f2 and cropping the images as needed.

I did shoot some stuff with the 56mm. But only because it was there. I could easily have gone without it. So it is out going forward. There was really no need for it.

Comforting to me, to have arrived at the same place, and for the same reasons.

My travel kit, what's yours?