I for one will very sadly miss her. 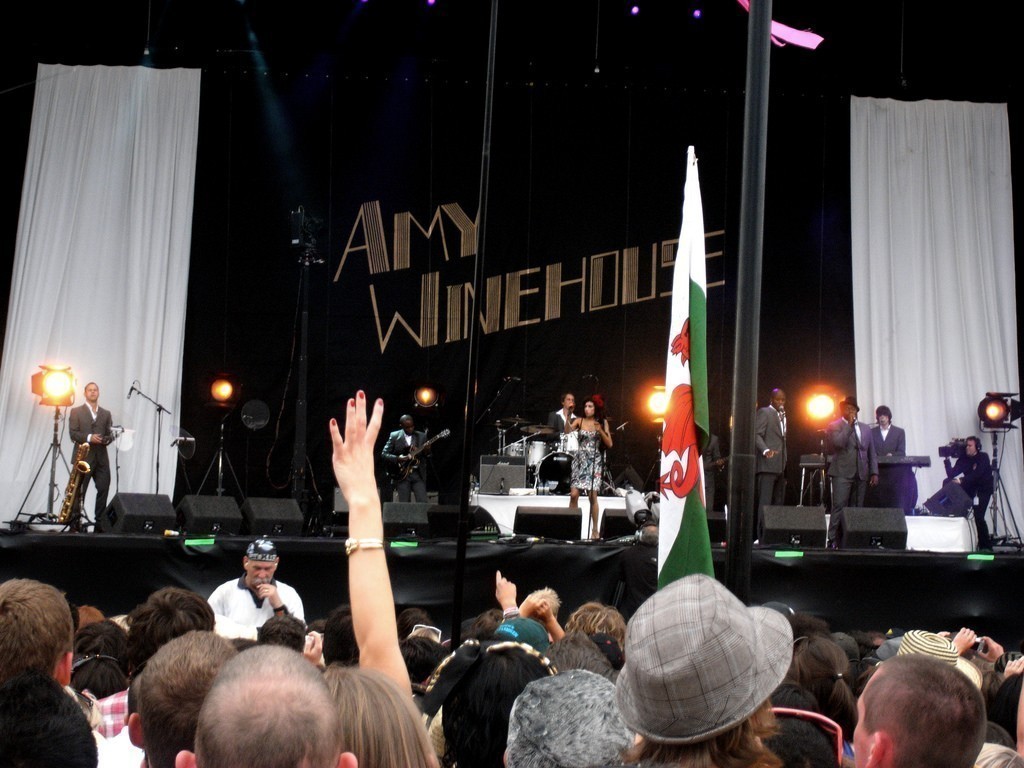 Me too. Very sad but not unexpected really. It was only ever a matter of time.

the more money she had the more she let her fans, (paying) down and the more anguish she caused her family, (presumably)

from what I have seen and read over the past few years, IMHO, and I am sorry to say this, and it may not be liked by many, - she became a drunken junkie

It also appears that she was given help many, many times by various people.

OK, she had a fabulous voice, but how will she be remembered, for her voice or for he total addiction to drugs and alcohol - IMHO the former does not excuse, in any way, the latter

because of how she abused her life and "the world" in front of many many young people, (which presumably would have had an influence on some of them), on balance and again IMHO, I see her addiction to drugs and alcohol as being what she will be remembered for

maybe I'm "too old" to understand, but, for me "Tribute" is certainly the wrong word

May she rest in piece. Many will miss her.

Bill, I don't disagree with what you're saying but I think that it's very easy to get exploited by manipulative "managers" and hangers on etc. when you come to fame quite young. Drugs and alcohol are a poisonous combination for anyone and it's downhill all the way.
P

hmm
I think "drunks and junkies" deserve help and support too, and from what I know her family were consistent in trying to be supportive.
I'm not sure what the evidence is that she was exploited.
One trouble with addiction is that the addict's world-view and relationships with others becomes very distorted and inconsistent
It is difficult to keep offering help and support when met with hostility, resistance and constant relapse.
I hope she doesn't become beatified as a romantic figure - there was a horrible inevitability to her demise, and a solitary death from overdose is an ugly and sordid way to end one's life - I've already heard too many celeb-soundbites doing so.
Mourn her loss (and she was lost years ago) but recognise her flaws.
[hope this doesn't across as a bit pious]

I understand Bill's frustration and/or anger. One doesn't have to be rich to ruin one's life with self destructive behavior, but I know we all do know this.

I think there is room for both admiration for her talent, and disappointment that her early death has meant the loss of that talent, on the one hand, and contempt for the drugged up life style that destroyed her on the other hand. I think most people including her fans (I count myself amongst them) can distinguish the two. I'm extremely angry with her and the lowlifes who fed off her for what has happened but at the same time I'm not prepared to dismiss her creative side. I was lucky enough to see her perform on one of her good days and she was mesmerisingly good.

BillN said:
the more money she had the more it allowed her to exaggerate her natural characteristics and tendencies

the more money she had the more she let her fans, (paying) down and the more anguish she caused her family, (presumably)

from what I have seen and read over the past few years, IMHO, and I am sorry to say this, and it may not be liked by many, - she became a drunken junkie

It also appears that she was given help many, many times by various people.

OK, she had a fabulous voice, but how will she be remembered, for her voice or for he total addiction to drugs and alcohol - IMHO the former does not excuse, in any way, the latter

because of how she abused her life and "the world" in front of many many young people, (which presumably would have had an influence on some of them), on balance and again IMHO, I see her addiction to drugs and alcohol as being what she will be remembered for

maybe I'm "too old" to understand, but, for me "Tribute" is certainly the wrong word
Click to expand...

Bill, Maybe I'm just to damn old too...Tribute is not the right word.
Her managers, family and friends are guilty for not stepping up and getting in her face....
Sorry, I have no tolerance for drug and alcohol abuse. I've lost way too many friends thru the years that didn't have the money or resources to combat the illness...
P

Streetshooter said:
Her managers, family and friends are guilty for not stepping up and getting in her face....
Click to expand...

Don, we saw those very people walking her into treatment centres on a number of occasions, only for her to walk out ... you can stage as many interventions as you like, the individual has to want ot stop and take some responsibility ... and she didn;t survive long enough to be able to make the decision ...

Paul, I understand but a 27 yo Millionaire with world wide popularity, she made her decision.
In the end, we are all accountable for our actions.
It's not that I'm insensitive to her situation, that's not it at all.
It's the fact that people with advantages and resources should not take those things for granted.

When you dance with the devil, the devil changes you, you don't change the devil.

I feel for her friends and family. I'm sure there's a cross to bear...somewheres.
Maybe I'm just worn out from too many soldiers funerals.
Maybe I'm just old like Bill stated but I feel like I feel.
P

That's just what I was saying Don ... perhaps I misunderstood you

Or perhaps I misunderstood you....

That's why we make photos... Words are so primitive....

It isn't like she got away with it. She is dead. She brought it on herself and paid the ultimate price. Non of that stops her being a very talented creative person who has left behind a legacy that enriches our world. It is more than I will ever manage. The people that really knew her say she was a kind and generous person and they said that well before she died. Even our gutter press had an affection for her(she had a habit of bringing them all mugs of tea on cold mornings when they had been staking out her house all night in the hopes of catching a 'shocking' picture of her).
I'm lucky enough to not have an addictive personality. I don't presume to judge people who do. Life is not so black and white.

Some people have unfortunately an addictive personality Amy was one of these people it is extremely sad that one with so much talent should die so young, however I too balk at the word 'tribute' in this particular case..sorry if that offends her family friends and fans, but others have fallen foul to drugs and booze and overcome their addictions to live a long and full life.

OK so here is the thing. When someone dies it is generally accepted good manners to pay tribute if you want to or say nothing if you don't. I know that doesn't apply on the internet I suppose but I hadn't realised this doesn't apply on this friendly forum we have either. I wouldn't have started this thread if I had known this would happen. I'm a little saddened and a little disappointed.

I wouldn't even have started this thread if I hadn't happened to have a photograph of her. Otherwise I wouldn't have thought it an appropriate forum to say anything about her despite my personal admiration. (I'm 52 by the way, whilst people are mentioning their age for some reason)

Will, I for one am not being judgmental or dismissive about her, or her choices, and certainly not about your desire to mark her passing ... sadly, many people have direct and unhappy experience of addiction in friends and family and even themselves ... so it is a subject that provokes strong feelings ... it is perhaps unfortunate that the thread has become a discussion rather than the in memoriam you intended, and I'm sorry if my contribution has helped push it that way
B

Personally I saw nothing in her to be worth the time to listen to and failed to discern the 'wonderful creative genius' that is now being mentioned all over the web.......

She was but one person and this week there has been tragic loss of life in both Norway and China,...untold multitudes are in shock and grief .....

I come to this site to read about photography and push aside my own pain for a few brief precious minutes, so why is she being discussed here?

Will. Dont take offense or anything personal. It's a good thread. I can imagine similar conversations taking place in many places around the world.

You have a right to post a memorial/tribute thread. These situations bring out deep personal feelings based on ones experience. I just read and express what I feel and I appreciate reading others thoughts even if they differ from my own.

Just so you know... I fly the American Flag at full mast always. When a politician passes and everyone lowers to half mast, mine flys at full mast. It's my tribute to the troops who defend it.

The world will miss her music and talent but the reason for it's loss is unforgiven.

The life of young stars often is not as easy as one thinks. They may have much money, but very often not many real friends or even none at all. They have signed contracts with labels and people who just want to use them to earn more and more money.

Being on the stage with thousands of cheering fans has a huge emotional impact on an artist, which is hard to be understood fully without having been in that situation. This emotional state does not stop at the end of the concert, but can endure even days after the concert. It may be hard to understand for many people, but it can be very hard to deal with the life of a star: these thousands of cheering (and often hysterical) fans, the emotional exceptional situation during and (even days) after the concert, the missing or restricted privacy, the loneliness...

Sometimes these artists don't find a way to cope with that and if there is no friend to help them at the right moment, some will break down and eventually begin to anesthetize themselves with alcohol or harder drugs. If someone drifts into this kind of misery, it will eventually be very hard to come out of that. Addiction is an illness which is very hard to defeat. One may really want to overcome an addiction, if the situation which has lead to the addiction endures, it will be very hard not to fall back into the addiction again. This is no moral weakness, but just how addiction works.

Every time a star breaks down and takes drugs, there are self-righteous hypocrites without any understanding and empathy, who point their fingers at those who seem to fail according to their moral imaginations. Finding a way how to deal with the mechanisms causing the problem is much harder and yet this is the right way.

Today should be a Tribute to Bowie
2