Advice Wanted Uh-oh, I'm at it again . . . wanted: your recommendation for a camera for "harm's way"

Stopped by Peebles Island today on the way to church. This is what we saw: 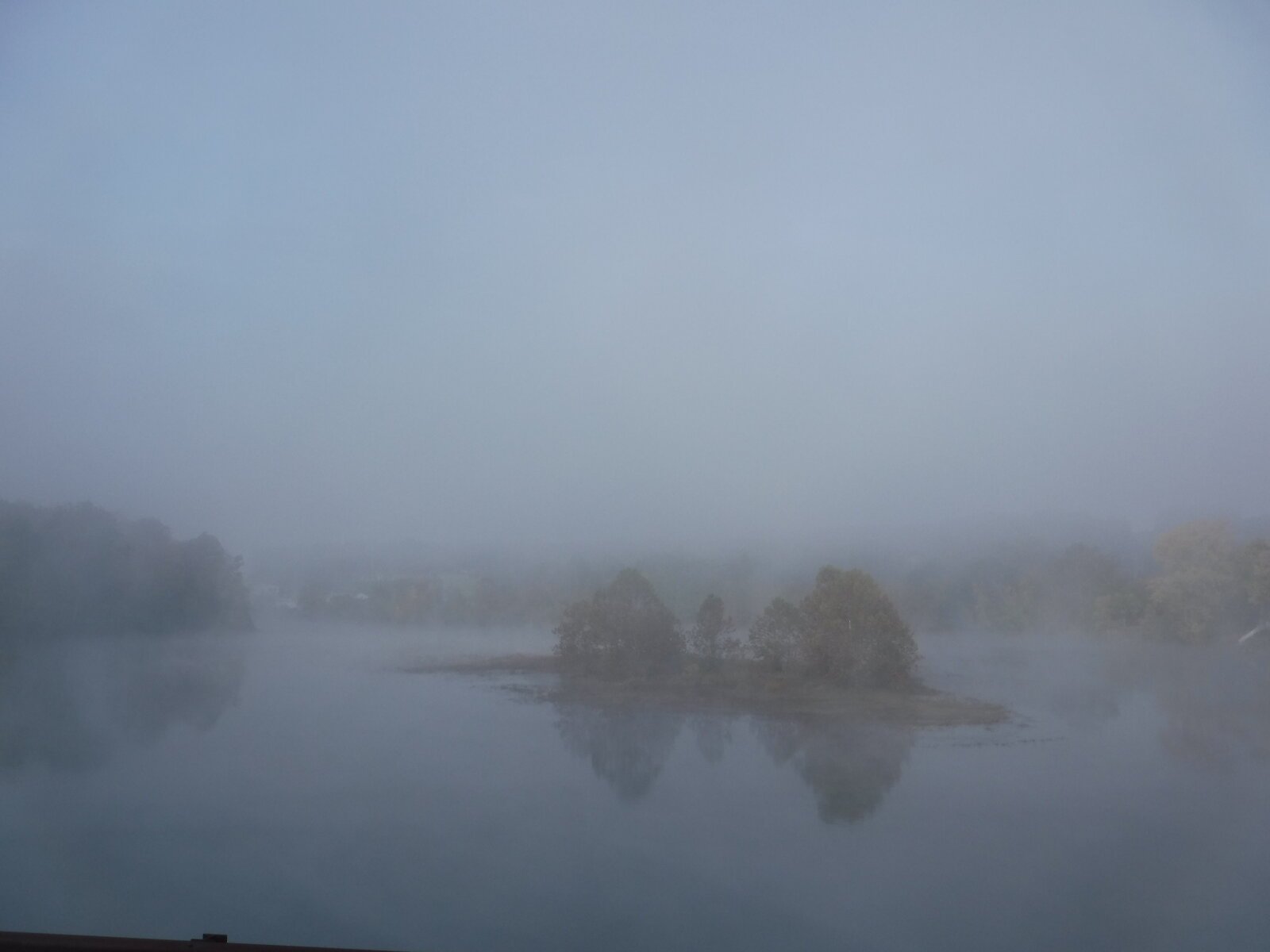 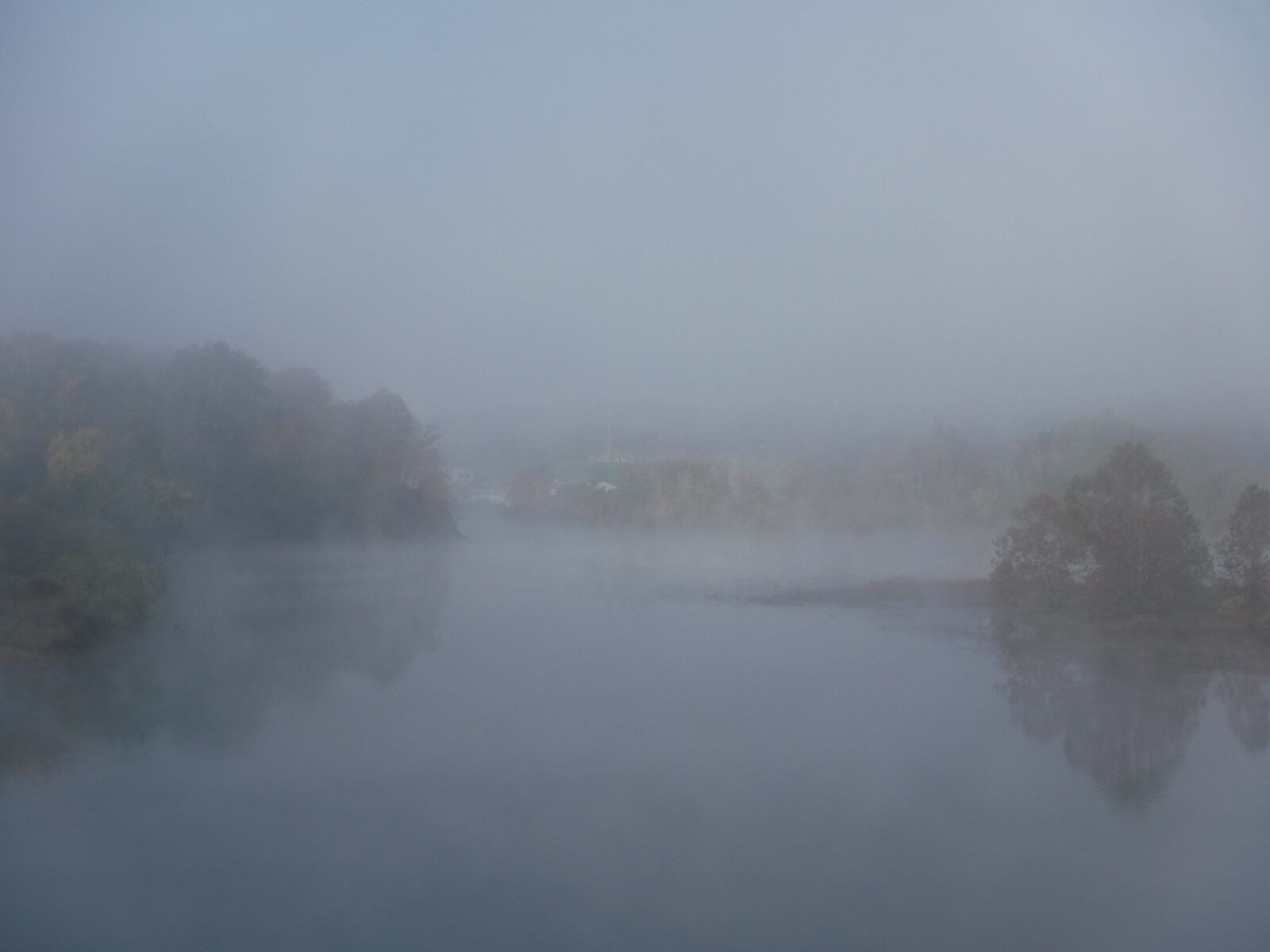 I got a few shots, but I'm not really pleased with the technical image quality and the lack of a viewfinder (which made it impossible to frame a couple of shots): 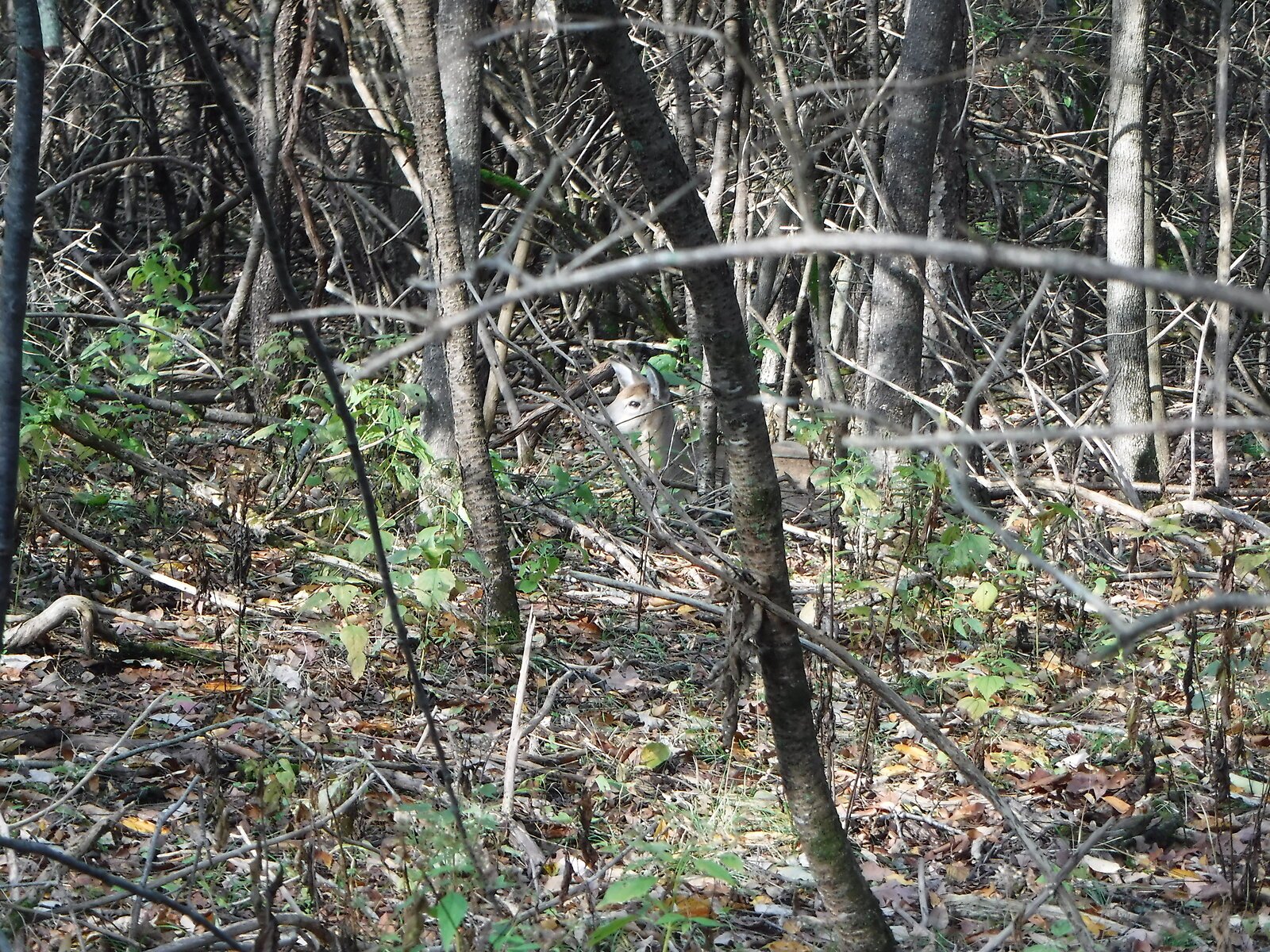 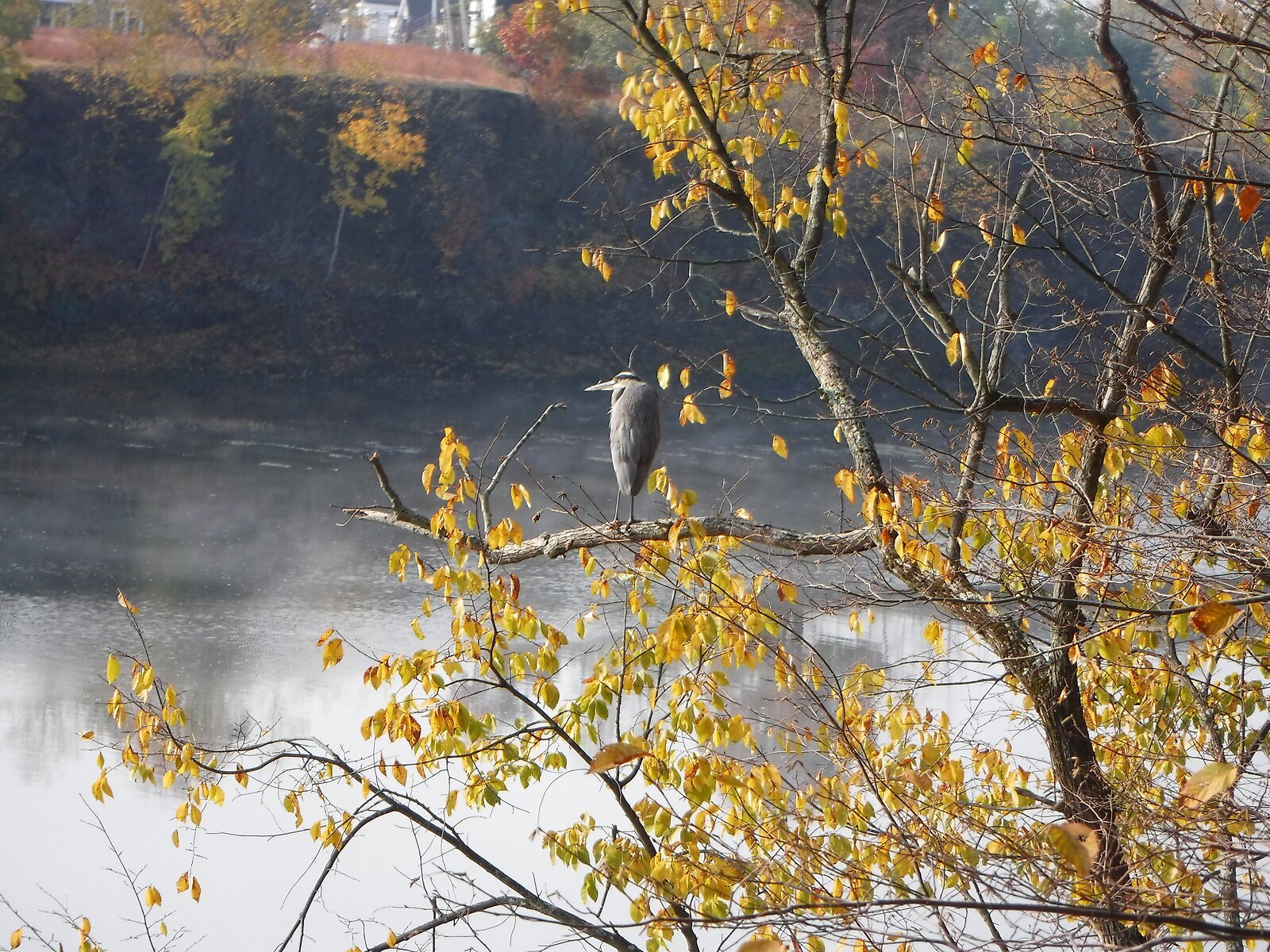 So I'm looking for recommendations for a camera/lens combo (at least 135mm e) that you would feel comfortable using in heavy rain, snow, fog or spray. Used would be fine.

That’s a tough one. Your RX10 IV is WR, after all. They used to sell bags that fit over the body and cinched at the lens for extra protection. Other than that, a waterproof or underwater case?

Other than that, things will get much more expensive - I can recommend the Nikon Z FF bodies and the 24-200mm. The Z 7 has great cropping potential, but I personally prefer the Z 6; the Z 5 does everything you need. I've carried the Z 6 with the 24-70mm f/4 (same level of sealing as the 24-200mm) through driving rain without issue, and the same goes for the E-M5 III with PRO zooms; the smaller weather resistant Olympus zooms are equally well sealed.

Other than a used Panasonic 100-300mm ("Splash and Dustproof Construction") and a used WR m43 body I can't think of any alternative to your RX10 mk4 that wouldn't be even more expensive...

But the RX10 should be the camera for the job... maybe an added raincover for peace of mind might be the way to go...

Rain cover! That’s what they’re called. I just couldn’t think of the term.

I wouldn't trust the weather sealing on the RX10 much - I got a nasty dust spot on mine after shooting in a... Sahara dust storm, ok, poor example ;-) but still they're markedly less well sealed than most WR ILC's, apart from Sony's equally poorly sealed early a7 efforts.

For top sealing mirrorless, indeed Olympus, Panasonic and Nikon are highly rated. Especially for superzooms, sealing the lens is harder than thebody. Imaging Resource did an article on Olympus weather sealing, their (Pro) lenses really go above and beyond what I am aware of other manufacturers doing, including some goretex-like mesh to let air move in and out while zooming, without water coming along.

For going way beyond normal use, most videos and other anectodal evidence of hosing down camera + lens combo's, having them stand in an inch of standing water, or (accidentally or on purpose) submerging them for a few seconds and coming out without issue, have been Olympus. Maybe it's just because they have the reputation now and people don't try with other brands. But if you're looking for an ILC to go white water rafting with, I'd go Olympus + Olympus Pro lens (the 12-200 is claimed by Olympus to be sealed to the same degree as their Pro lenses). For the heavy rain and snow scenario you propose, I'd be happy trusting non-Pro WR lenses, and Panasonic / Nikon Z with respective weather sealed lenses. Note that Panasonic tends to place the lens mount seal deeper inside the mount (smaller circle) than Olympus, so be careful when removing a Panasonic lens after heavy rain, as there may be water between lens and body.

Fuji is often said to have excellent sealing but I've seen wayyyy too much anecdotal evidence of problems to really trust it in heavy rain scenario's (light rain should be fine). Sony's newer bodies are apparently excellently sealed apart from the bottom, but I have no idea how thoroughly their lenses are sealed.

Finally, Panasonic's FZ300 is weather sealed. I don't remember to which degree, but it might be unusually good for a fixed lens camera. IIRC they claim something along the lines of 'sealed to the same degree as our ILC cameras'. Now if that means GH5 / G9 level, you're good. I have no idea how well the GX8 and other Panasonic weather sealed cameras keep out the rain, but the FZ300 might be worth looking into.
Last edited: Oct 19, 2020

I think I'd take the second-best thing, that is the Olympus E-M1 series.

1) Your RX10 with a rain cover or trash bag.
2) Used Olympus E-M5 or E-M1.
3) used Panasonic G or GH.
3) Newer Samsung phone (probably most modern cell phones, but modern for a cell phone means within the last couple of weeks)

I think I'd take the second-best thing, that is the Olympus E-M1 series.
Click to expand...

I remember seeing that picture of the first EM5 after it had spent 5 minutes in a shower and being a bit bemused.

For just one or two photos every once in a while, I'd "use" a second person with umbrella (if available/willing )

If it's going to be more photos (but still just occasionally) I'd try and see if a raincover is a workable solution (they're a bit of a hassle in use - so might not be ideal... But there's cheap-ish ones - that you could just stash in the glove-compartment...)

I'd only recommend to buy new camera gear if you know that you're going to take a lot of photos in those conditions...
(Well, that's at least what the non gas-head on my left shoulder would recommend

The E-M5 (the still quite serviceable original edition) with the Zuiko 12-40 f2.8 served me well during Lao New Year in Luang Prabang, which is a very wet water festival. But I already had the kit. I honestly don't know what I've have done otherwise -- plastic bags and prayers, probably. The pictures will give you an idea of the wetness of the occasion. The kids were especially happy to drench you.

I've stood waist deep in the ocean while a hurricane was making landfall shooting with a Fuji X-Pro2/Fuji 50-140. Never missed a shot. Never had a failure.

Pic of it just before heading out into the ocean 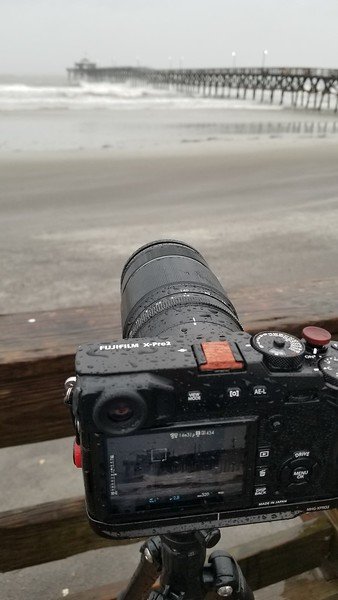 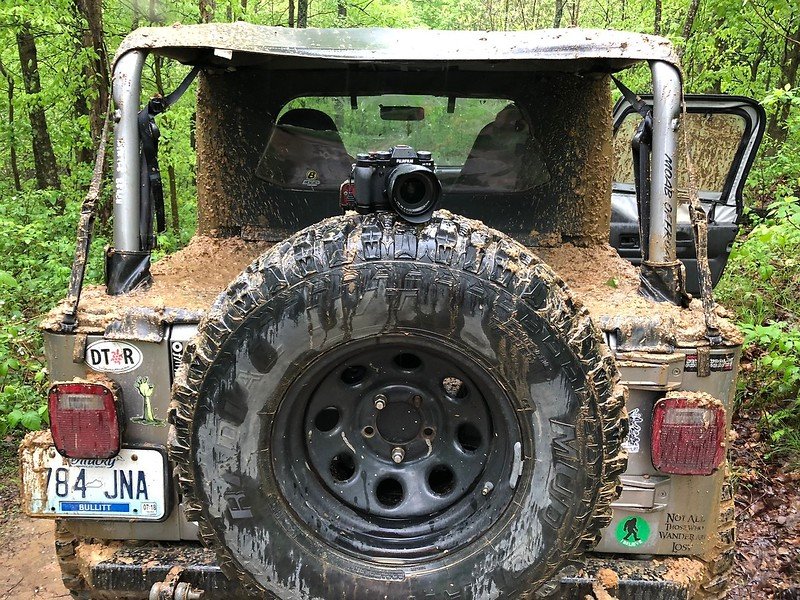 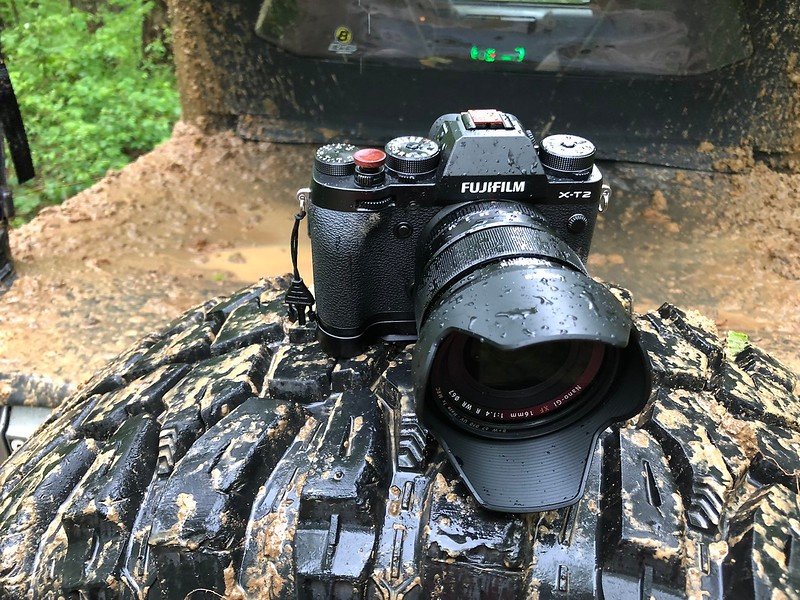