Unjamming a Nikon F2, a "Likely Place to Look"

I've owned Nikon F2's since 1978, and have never had one jam up on me. BUT- I've bought two that were jammed, dirt cheap. Some 20 years ago, sent a jammed Nikon F2 and F up to Essex for a CLA. They are no more, and prices to repair film cameras have skyrocketed.

I picked up a '71 Black Nikon F2 off of Nikoncafe for a Donation to a worthy cause. The F2 was Jammed, but it is an early one and worth displaying. BUT- I hate "just displaying" a camera, must have it working. A web search indicated that a likely cause of a jammed F2 is the clutch that is used to stop the camera from winding past a full frame. The mechanism is easily reached after taking off the bottom plate. Tools required, needle-nosed pliers to act as a spanner to get the motordrive linkage off, and a flat-head screwdriver. This is an early F2, later ones use JIS screws.

After poking around a little- spotted the jammed "clutch". Pulling it back with the screwdriver allowed the camera to advance and be fired. Some very light application of synthetic oil bought off EBay for camera repair seems to have kept all in working order. 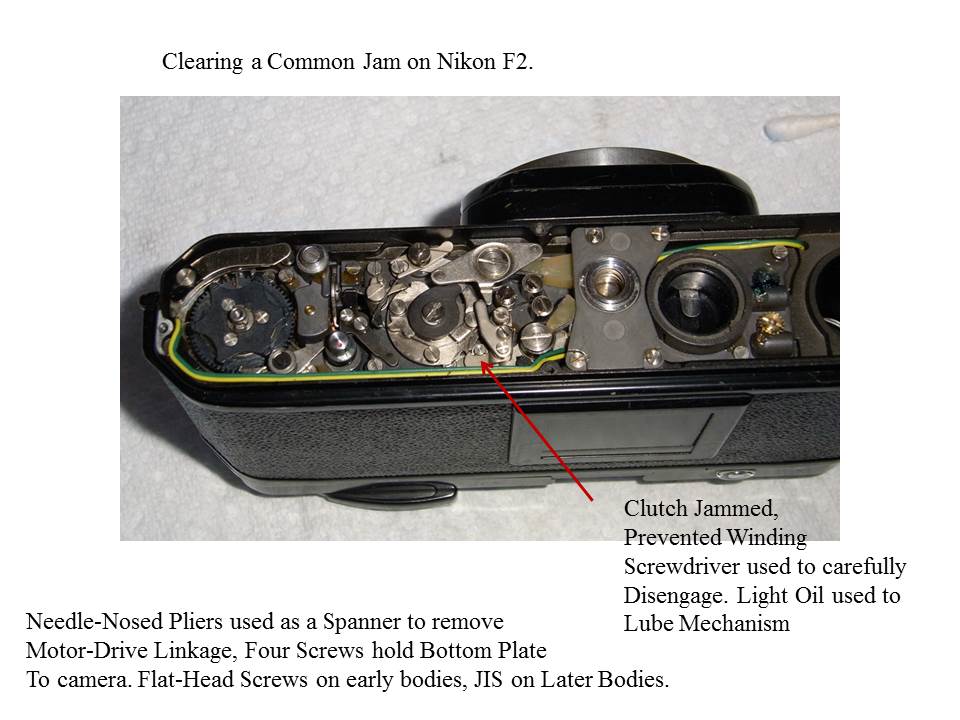 This was a 20 minute job, then went onto replacing the mirror bumper. The early Nikon F2's have the same leatherette as the Nikon F, which dates back to the Nikon S2.

Nice save! Definitely a shame to have shelf-queens gathering dust when they could be shooting film.