Quite a few of the news and rumour sites (43 Rumors, 1001 Noisy Cameras, Sony Alpha Rumors) recently linked to a video presentation all about the new Voigtländer Nokton 25mm f0.95 lens for the M43 format. (You can view the video on any of the linked sites.) 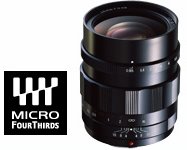 As well as demonstrating the abilities of the lens the video also carried an interview with a senior design manager at Cosina, who make the Voigtländer lenses, and showed how the lens is produced at the Cosina manufacturing plant in Japan.

SAR picked up on a brief comment by the design manager towards the end of the video where he mentioned both the M43 system and the Sony NEX/E-Mount system. SAR speculated that this might suggest future Voigtländer E-mount lenses.

I checked Sony's press release from February of this year in which the company announced that the specifications of the E-mount would be made available to independent manufacturers. That release also included brief comments from a number of those companies welcoming Sony's initiative.

Cosina was indeed one of these. Their brief statement impled no commitment to make E-mount lenses, but it seems reasonable to assume that at the very least Cosina hasn't ruled it out.

It would be interesting to know how much redesign would be required to make the Nokton compatible with the NEX given that system's larger sensor, or if Cosina designed it from the start to be compatible with both.

I'm not personally in the market for an $800+ lens right now but many M43 user will be looking forward to seeing what else Voigtländer has planned for for M43 and NEX user will be wondering if they have any plans for the E-mount.

Yes, it's well anticipated that this lens will be available in E-Mount. I suspect that we may possibly also see an optically redesigned lens in DX/EF-S one day too.

Olli, the Voigtlander Nokton 25mm f0.95 lens in the M43 format started shipping in November last year - it is strange the video took so long to appear. I received my lens on the first Tuesday in November (the date is memorable as it is Melbourne Cup Day when Australia stops for 5 minutes to watch a horse race). I have posted quite a few images from the lens on this forum.

The video itself is very good. It it obvious why the lenses tend to be shipped out in batches as they really are hand made. Pretty amazing for a lens of that sort of price. This is genuine old-school lens building.

Maybe they were waiting until they got production up to a reasonable level so that the delay in getting one is manageable? No point pushing a product, creating a market and then not being able to even promise a delivery date I suppose.

Sigma & Tamron were also mentioned to be making lenses for the E mount and Sigma have released images of a prototype prime lens which was 30mm f2.8 if memory serves me correctly.