serhan said:
I don't know too much about bowing but they were the slowest activity show in the festival I think the eye level should be easier, but then they are not too far from their target. When they took their time, I practiced my manual focus shooting It is not a Noctilux on nex, eg 75mm 1.9, but I am waiting for Sony full frame to use it more, but then the dof might be even harder for fast shooting, maybe it might be easier to focus on a m9...
Click to expand...

Focusing on the M9 is difficult too. At least for me. Razor thin DOF combined with possible back focus and inherent rangefinder inaccuracy. My best photos during the short period I used the Nokton were shot at around 2.8 (if I remember correctly).
F

Mine is taped wide open. I have no issues focusing it but I needed to calibrate both my M9s because of this lens (and the 135 which is just as picky). But doing so made other so much easier to focus all my lenses. A perfectly calibrated rangefinder is wonderful but it only has to be minutely out to be really frustrating.

Received the lens while at work today.

I took a couple of quick snapshots - what I noticed was it was a tad on the soft side when wide open. BUT I must say that seems to be more or less on par with my non-L Canon DSLR lenses at their sharpest. I should probably do a proper comparison.

The Nokton started to sharpen up from f/2-2.8 onwards, and it was bitingly sharp from around f/4-5.6.

Corner-to-corner sharpness actually isn't too bad at all apertures, it's definitely better than my Voigtlander 35mm f/1.4 where the corners are visibly not as sharp as the middle of the lens.

But anyway I took a few more snapshots after work while I was waiting to catch the bus home. These are not untouched JPGs straight out of the camera but are post-processed in the way I'd normally do it, because I am going to post-process my photos by default anyway and that's what matters to me.

Note also I didn't have a UV/IR filter so some blacks may look purple. 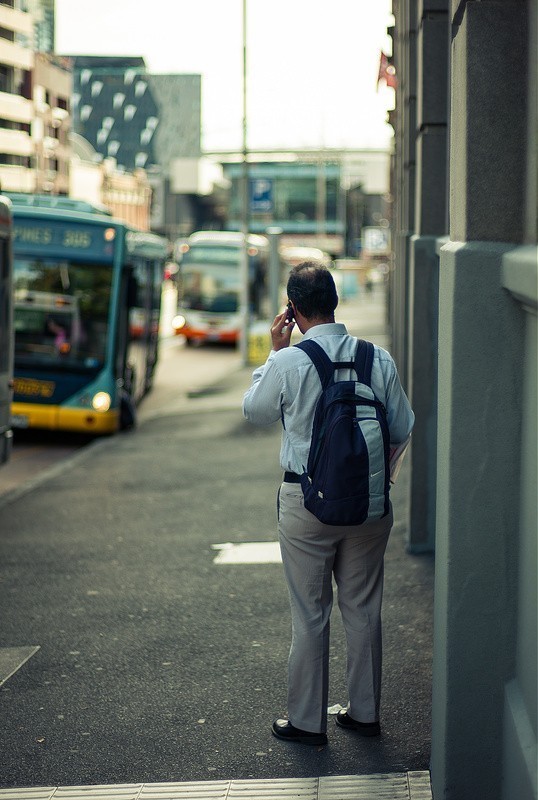 I think this might have been at f/2.8 but I'm not sure, the shallow depth of field looks like it's wider than f/2.8: I was trying to aim for the guy in the foreground but he was walking too fast so I went for the two guys behind him instead and just managed to get into focus: This photo was taken through the grimy bus window so there is a funky distorted effect with natural vignetting from the edge of the window: If anyone wants me to take proper straight-out-of-camera shots for pixel-peeping purposes at various apertures, let me know and I'll see what I can do.

Thanks a LOT James. Full frame images should be hidden away on a separate part of the website so the rest of us can't see them.

because now I want one

Be strong, man! Be strong of heart and wallet!

(Can't say the same for myself although if you noticed near the start of this thread, I've been wanting this lens for almost a year now.)

TraamisVOS said:
Be strong, man! Be strong of heart and wallet!
Click to expand...

No problem. I've been known to stretch my budget from time to time, but never to break it.

Thanks Kian, normally I wouldn't bother taking a photo through grimy glass from public buses but I couldn't help snapping a shot with my new lens.

Luke said:
No problem. I've been known to stretch my budget from time to time, but never to break it.

Then you are definitely stronger than I. Did I mention that I sometimes .. don't eat?

TraamisVOS said:
Then you are definitely stronger than I. Did I mention that I sometimes .. don't eat?
Click to expand...

That's the kind of dieting I need, but lack the discipline.

Hmm... well maybe I am strong, but just at the wrong end of the GAS syndrome.

TraamisVOS said:
Hmm... well maybe I am strong, but just at the wrong end of the GAS syndrome.
Click to expand...

Christ! You guys have a hell of a motivation, I'm flugergasted .

That sounds like what needs to be done to my stomach after not eating for a day or two.

Very nice bokeh on this, similar to Zeiss planars. It looks like wider then 2.8. Enjoy the lens...


TraamisVOS said:
I think this might have been at f/2.8 but I'm not sure, the shallow depth of field looks like it's wider than f/2.8: It's not bad in that photo isn't it? But I can see why some people say the bokeh is harsh in the other photos. My Voigtlander 35mm behaves the same way too, in some photos I get beautiful soft bokeh, and in other photos it looks a bit harsh. I haven't figured out how it works yet.

So I've had this Nokton for a couple of days now although I haven't had the time to really play with it as much as I'd like to. But nevertheless I think I am really starting to like this lens, it's very well built and feels solid, the aperture ring feels great when you click through the f/stops, focus throw is not too long and feels silky smooth.

I'm not really finding an issue focusing when it's wide open, it will take some getting used to though.

The bokeh is a crap shoot! More often than not I am finding the bokeh is creamy but in other shots it looks harsh-ish. But I'm happy with it, considering the next step up for an ultra fast lens is the $5000 SLR Magic Hyperprime and the $11,000 Noctilux.

Speaking of ultra fast lens, I am finding that with this Nokton I am able to slightly increase the shutter speed. So under normal circumstances when I might take a photo at 1/4s, I can get the same exposure more or less at 1/8s. That makes a pretty big difference as 1/4s is the absolute limit I can handle without causing handshake blur in my photos. The 1/8s makes a huge difference for me.

Random collection of shots of Keesha, Jadey, and Atom from today and yesterday. All shot wide open and all post-processed. I have to say, I really, really like the way this lens handles flares. I have really started to hate the flare in my Voigtlander 35mm f/1.4 MC where the flare manifests itself in a bright cutting curve across the photo. The flare on my 90mm elmarit f/2.8 is an improvement even though the soft but white-ish ghost-ish flare has a tendency to cover the entire photo, I still prefer this flare to the 35mm. The flare from the Nokton looks really, really, well controlled. I shot this wide open with what I thought was the sun clearly peeking in the corner there, I expected the entire photo to be washed out but as you can see, the flare looks contained. Keep in mind I was intentionally trying to make it flare to see what it looks like. Very good shots esp with moving subjects. The bokeh on this one shines: