I posted these on our sister site, mu-43.com. CC is always welcome.

I was in the North Georgia and South western part of North Carolina this weekend visiting some waterfalls and doing some hiking. These are from North Georga. I'm still getting the hang of the E-PL2. While most of the photos turned out OK, in high contrast situations I'm stilll having trouble with the histogram and jpeg tone curve of the images. I ended up undersexposing more than I needed to, at least looking at the RAW files, meaning I could have probably got away with a +1/3 EV on most of my shots. In good lighting or even lighting, I have no problems. In the tough lighting situations, the default jpegs shadows are too dark and highlights too bright. The RAW shows a flatter image, even when underexposed. By default, I have the contrast dropped a notch on the jpegs. I may need to drop it one more. I never had this issue with the E-P1 with the jpeg contrast set to 0.

This is the wolf creek waterfall in Vogel State Park. The waterfall is created by the dam at vogel state park. 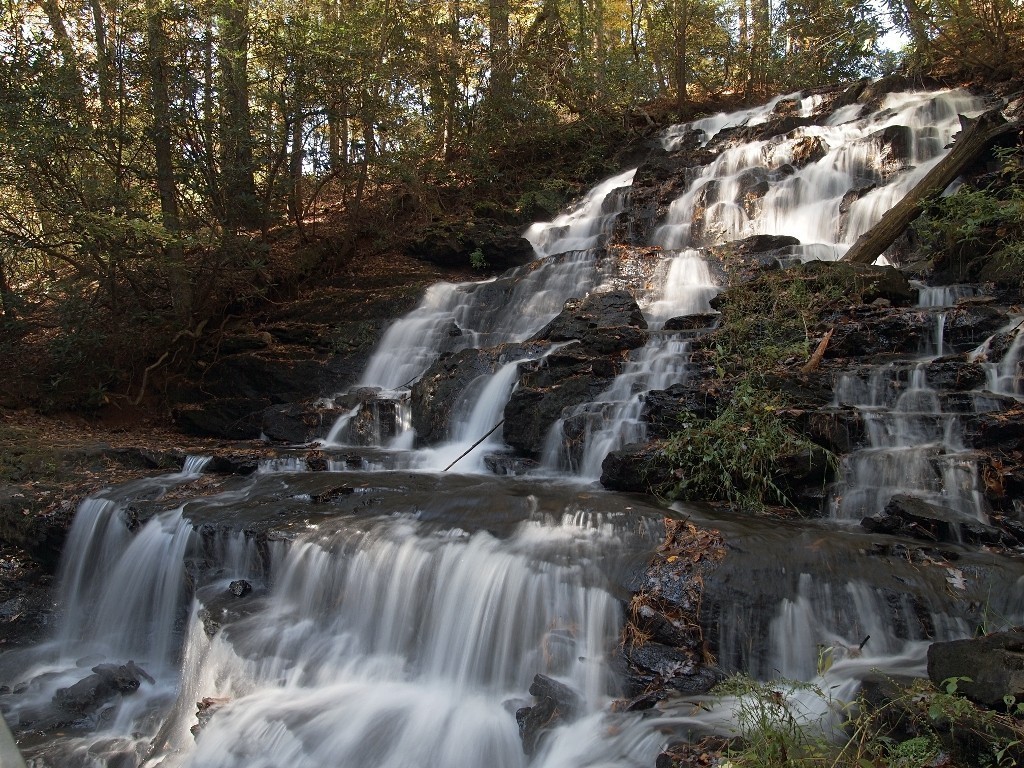 
This is just down the road, at Helton Creek. It is a two tiered waterfall. 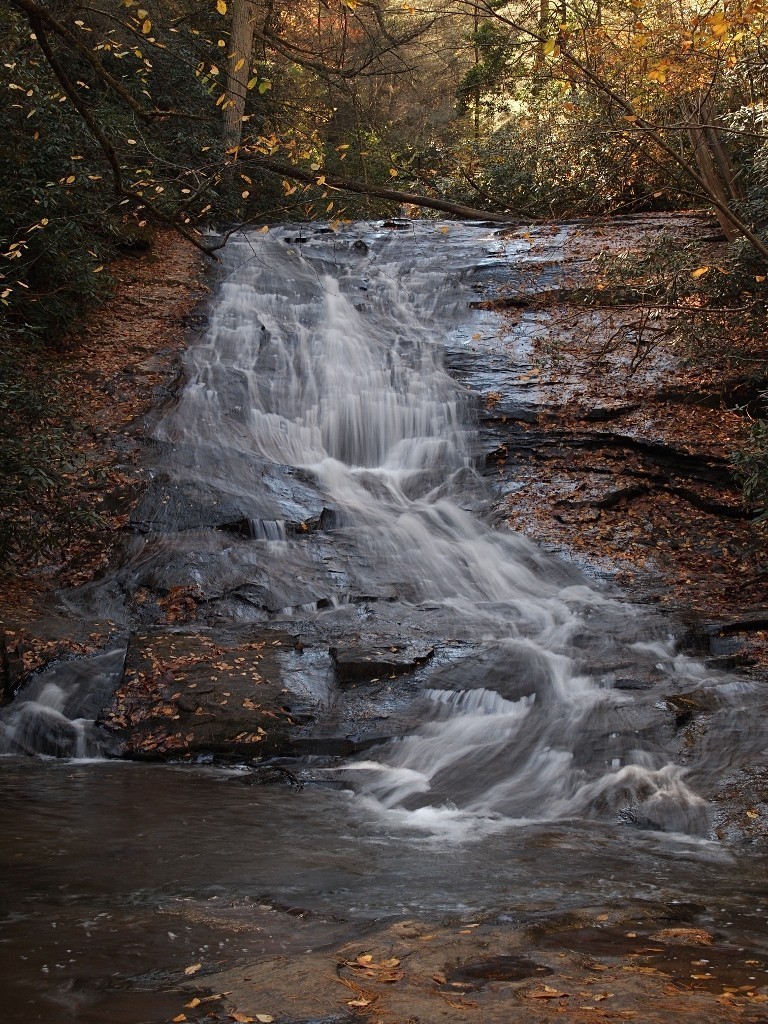 Looking from the side, and my favorite from the bunch 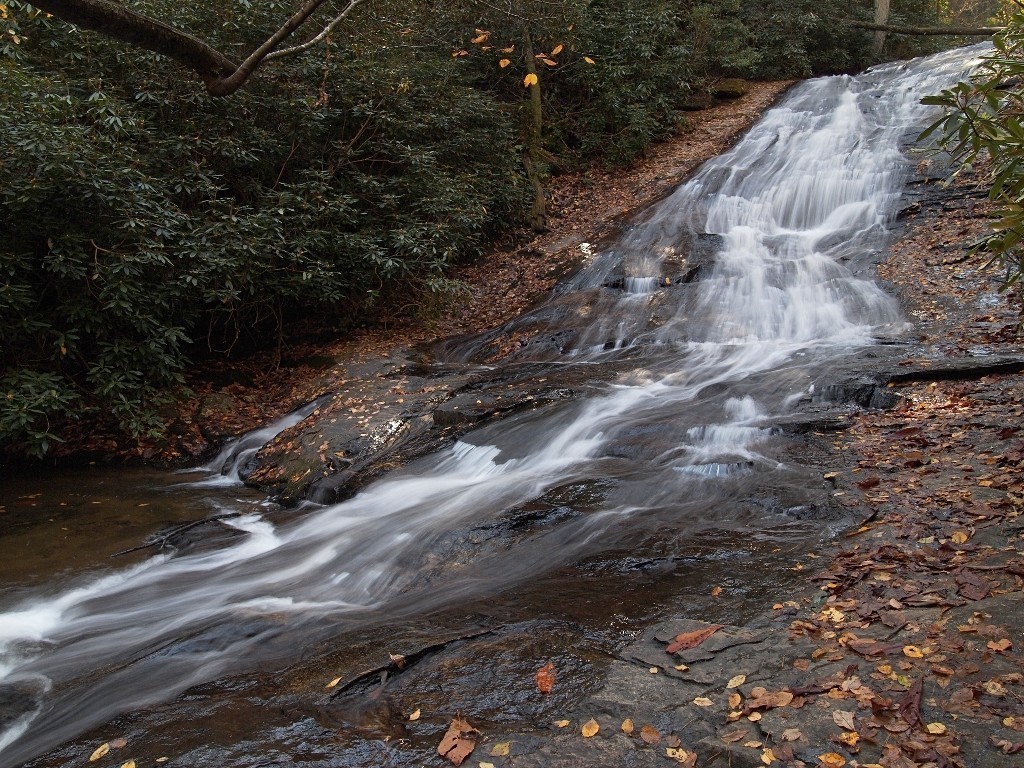 
And this is the upper tier. The sun was directly on top of the falls, putting the falls in shadow but everything else in direct sunlight. Can't win them all. 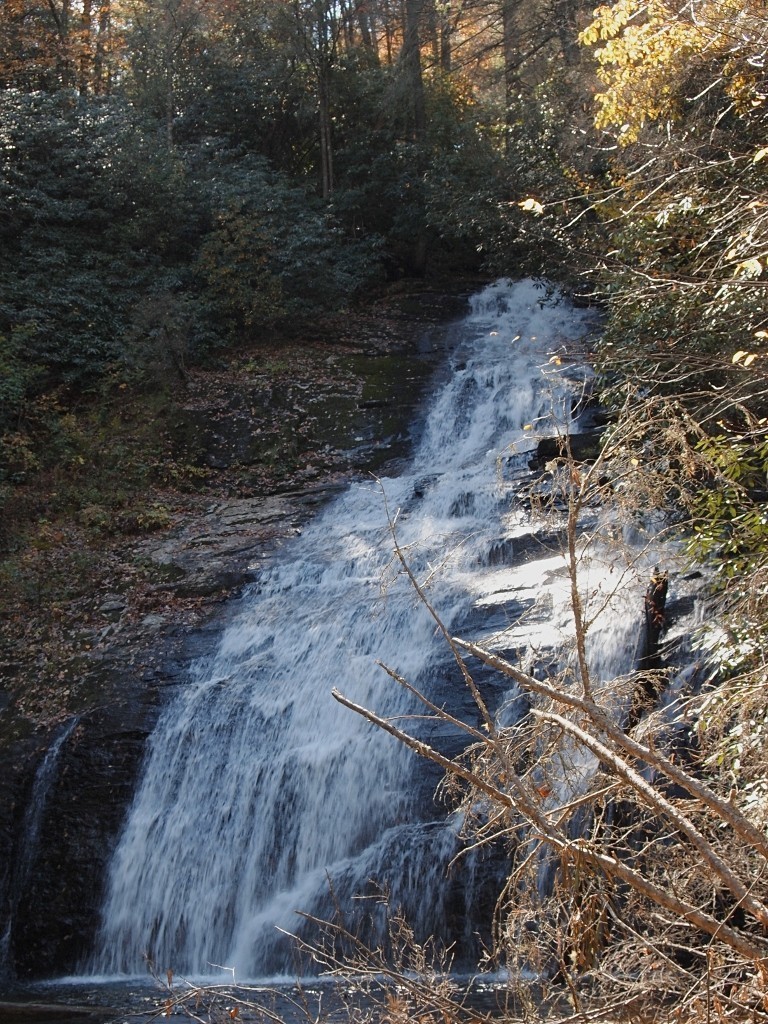 Very nice if a bit dark.

Is this a popular place, or a secret spot?
D

Hrm, a bit dark? Which ones? Just curious. The best time I've found taking pictures of waterfalls is cloudy weather or early/late. I visited at the wrong time. Sun was up causing horrible shadows and bright areas. The first three are about right, at least on my monitor. These are in thick wooded area, so the sun is covered by the trees. In the first one, the sun is hitting the top of the falls just a bit. The last one, the most difficult to capture, had the sun sitting above left of the frame, if you will. So, the clearing where the pool was was really lit up( just look at the blowouts on the branches) but the waterfall was mostly in shadow. I have the RAW files and I may try to process them better. I could count on my E-P1 jpeg almost 95 percent of the time. These are from the E-PL2 and the in camera jpegs just seem to boost the contrast too much, making shadows darker and bright areas brigter than I think they should. I have to do some more playing with the camera.

This is why I need some CC, because I'm still having difficulty with the exposure on the E-PL2. Luckily I have the RAW images. I may repost those this weekend.

The first waterfall is at Vogel State park close to Blairseville GA. It's a short hike down to the falls from the trail that goes around the lake. It's popular. The second water fall is at Helton creek. It's not as popular, but there were a few people there. It's a twisty gravel/dirt road on the side of a mountain getting to the trail. Then there is a short trail down to the lower section of the falls,(second two photos) and the upper falls is a hike up some ways from the lower falls(last picture)
D

So I went back and took at the RAW files in Olympus viewer. A few things I can determine:

-Olympus iEnhance seems to add about 1/3 stop of EV compared to the natural setting, even though I like the colors of the iEnhance better. It also adds a touch more contrast.

-When I shot the original images, I used the histogram to make sure I didn't clip the water or areas where the sun was hitting too the trees too much. The histogram made me believe more information was being clipped than I originally thought and the shadows brighter than what I thought.

-While it is going to require more experimentation, I think, to get similar to what I had with the E-P1 in both color and exposure is to shoot natural with contrast set at -1.


Here are my results for the first three processing them from RAW. The first on isn't much better, but I think the last two have improved significantly. I have yet to get to the last image I originally posted for RAW processing. 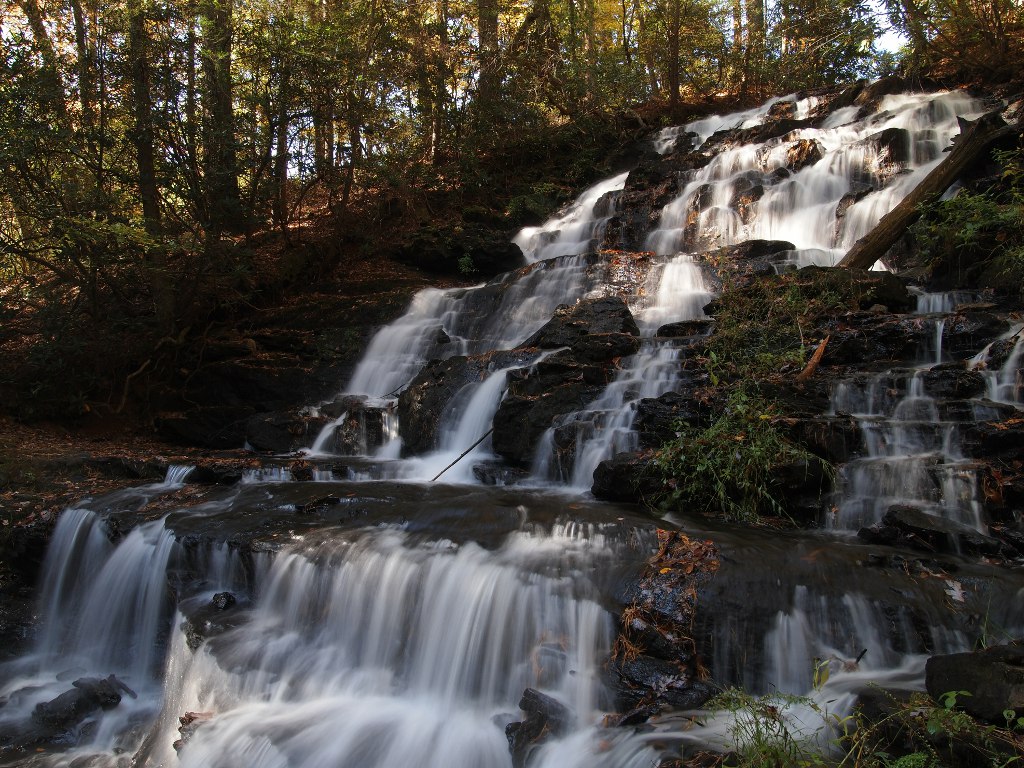 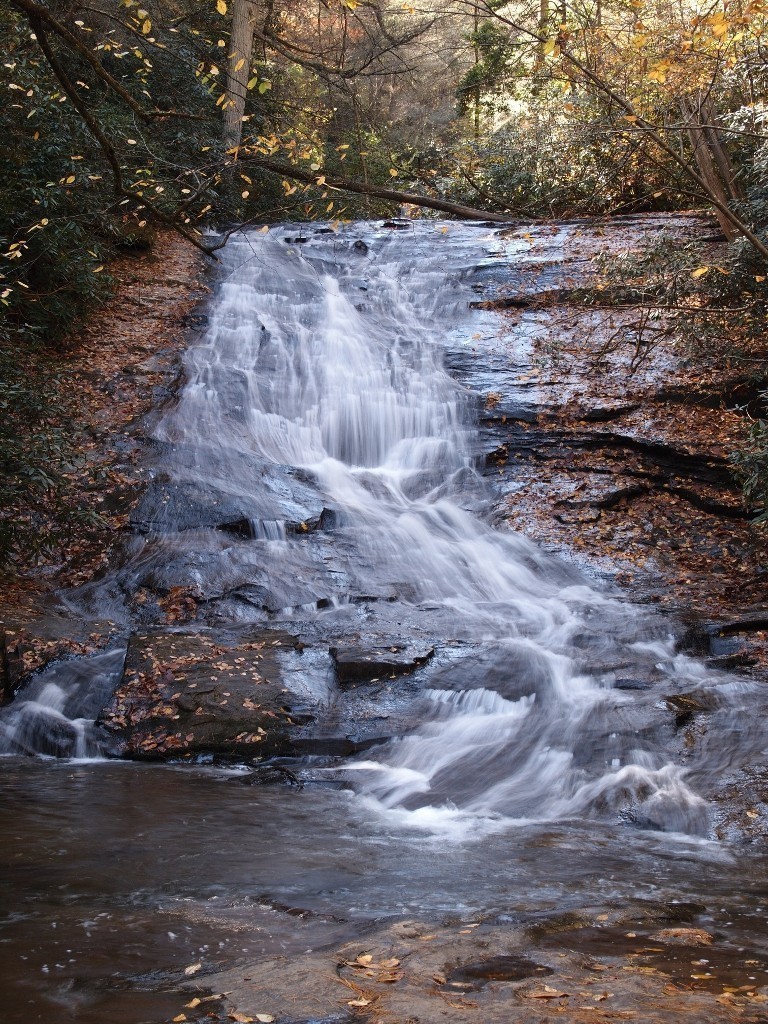 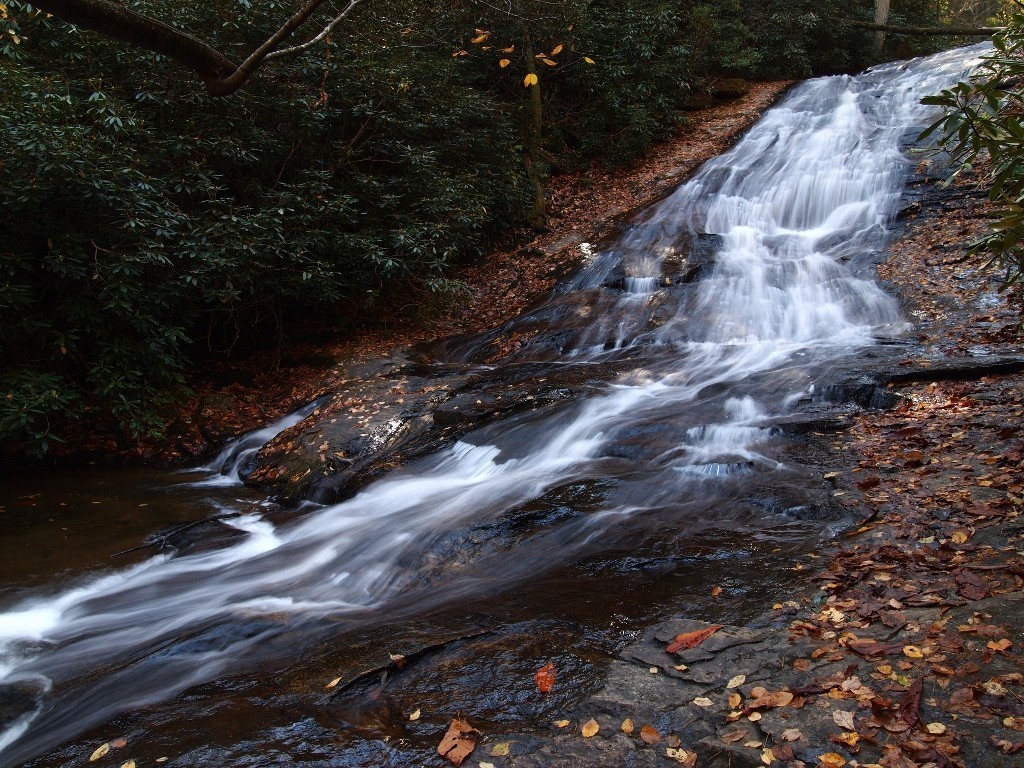 Jason, I'll tell you what - on my computer monitor (MacBook Pro) these new versions all look much better because they're more saturated and have more punch to them...and the light shows up more. I'd say there's a vast improvement.

It's very difficult for me to give advice since we don't use the same software. If you were using Lightroom, I'd say try adding just a touch more "Clarity" to see if it might make them pop just a bit more, and maybe play around with the "Tone Curve" module, add a touch of "Vibrance" perhaps... but I really do think they all, including your first one, look so much nicer now. The beauty you saw really shows up now!