Samsung What do you think about NX100?

My profession is photography. I'm an editorial freelance photographer andi'm an happy possessor of Olympus Pen E-P1. I consider myself with pride a micro four thirds photographer, i I believe that the future is in mirrorless cameras. Now i'm thinking that Samsung NX100 will be my camera FOR 2011.

What do you think? Someone has this camera? Strengths and weaknesses?
M

Seems like a nice camera, but are you really gaining anything over the E-P1?

Among different mirrorless formats, I would only change if there was a specific lens I really wanted to shoot.

madmaxmedia said:
Seems like a nice camera, but are you really gaining anything over the E-P1?

Among different mirrorless formats, I would only change if there was a specific lens I really wanted to shoot.
Click to expand...


I don't get out my oly pen. I'm searching a second mirrorless camera. I've read that nx is superior in sensor and AF.

This is going to be my next camera at some point in 2011. The main advantages over m4/3 systems is the sensor is larger with larger pixels so in theory it should deliver better high iso performance, however the high iso performance of most m4/3 cameras is pretty good and a little tweak in Lightroom goes a long way.

If I alreadu had a m4/3 camera I am not sure if I would switch to one of these, however since I do not have a m4/3 that is not an issue. The 20mm pancake lens looks very interesting to me
S

After a long search, the Oly E-P1 became my baby but left when the P2 with it's EVF came out. No cam in the last four years attracted me so much as the P2. The colouroutput is great and the overall feeling from my side - great!

Ok, some have bigger sensors or better ISO handling but at the end of the day the positive interaction between the stupid box and the brain in favour of a photograph with impact is all what should count..... some people get this with a Leica M but for me it's the PEN.....

As a side note: it's so quiet in the Oly-corner. Is there something going on seriously with an improved semi-pro body? And if yes, would there be an assortement of lenses in the quality range of Oly 4/3 or Pana?

silverbullet said:
As a side note: it's so quiet in the Oly-corner. Is there something going on seriously with an improved semi-pro body? And if yes, would there be an assortement of lenses in the quality range of Oly 4/3 or Pana?


Jan 6-9 in the Consumer Electronics Show in Las Vegas if anything is in the works Oly will announce it then. They have not one but two booths there this year

Olympus got a lot of buzz last year from the show, I would expect they will again this year

Things I don't like about it:
- Its image quality in RAW is not really better than that of m4/3 cameras.
- JPEG quality is worse, especially noise reduction.
- Extreme hot pixeling at slow shutter speeds (slower than 15s).
- When shooting RAW, the camera is slow as molasses. Come on Samsung, it's almost 2011, 3-4 seconds to write a RAW file is unacceptable. If you shoot 3 RAWs in quick succession, the camera will lock up for 10-12 seconds to flush its buffer.
- AF speed is slightly better than E-P1 but still worse than Panasonic GF1.
- Clip-on EVF is pretty poor (on par with my Sony DSC-R1 of 2005 vintage) and really annoying: when you awake NX100 from sleep by tapping the shutter button, the camera is back to using the LCD - even if you were using the EVF before it went to sleep.
- Almost no customization options.
- Slippery body plastic makes it rather difficult to hold.
- Poor flash system: no high-speed sync, no wireless control, external flash (I used SEF-20A) in TTL mode often leads to overexposure.

Things I like about it:
- Lovely screen, really as good as anything.
- Good controls.
- Color response differs slightly from anything else... Samsung sensor used in NX10/NX100 produces great colors, especially I like its tremendously deep rendition of blue and violet tones.
- Cheap lenses. 30mm pancake is half the price of Panasonic 20mm. And for the Ukrainian price of Panasonic 14mm prime I can buy both Samsung NX100 body and Samsung 20mm pancake. (But this is probably not true for the rest of the world.) 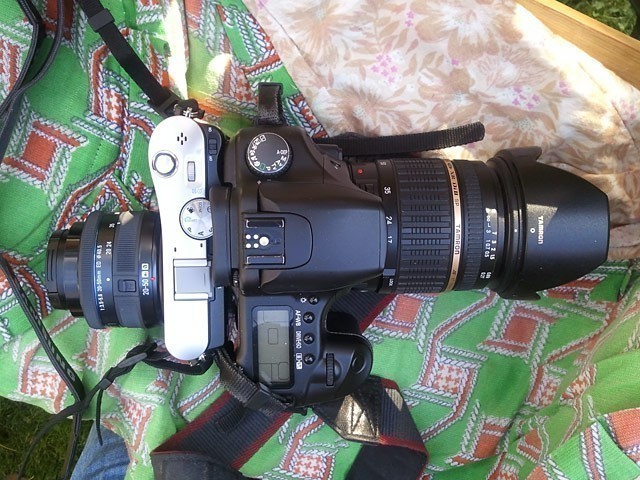 And here are some full size image samples:

Thanks a lot, Stratokaster for NX100 samples.
I own Samsung NX10 and NX100 and I agree to most of your comment.
The Things you like abot NX100 are more important than what you dislike, in my opinion.
Alessio Coghe, I just think Samsung NX10/NX100 is viable alternatives to crop DSLRs.
Thanks & Happy New Year!

Thank you stratocaster for your comment. You have said things that i don't knew. Thanks Julian i am in accord with you.
D

The 1600 ISO pictures were suprisingly good, The 1250 ISO of the little boy was fairly noisy but the light was probably pretty bad. The ISO 100 and 200 were very good. The printing on the umbrella was very crisp and no color fringing. Thanks for posting these.

Like you my job is as a photographer. I've had an NX100 for a while and I like it very much. I'm in the process of putting together my own review of it and I'll post it here when I'm finished.

It is going to be very positive.


Alessio Coghe said:
My profession is photography. I'm an editorial freelance photographer andi'm an happy possessor of Olympus Pen E-P1. I consider myself with pride a micro four thirds photographer, i I believe that the future is in mirrorless cameras. Now i'm thinking that Samsung NX100 will be my camera FOR 2011.

What do you think? Someone has this camera? Strengths and weaknesses?
Click to expand...

Excellent, David - I'm sure your review will get a lot of readers. Looking forward to it!

What about the Sony NEX? Awesome camera....shame about the lenses but pop a manual focus lens on the front and it's as good as any crop sensor DSLR!
S 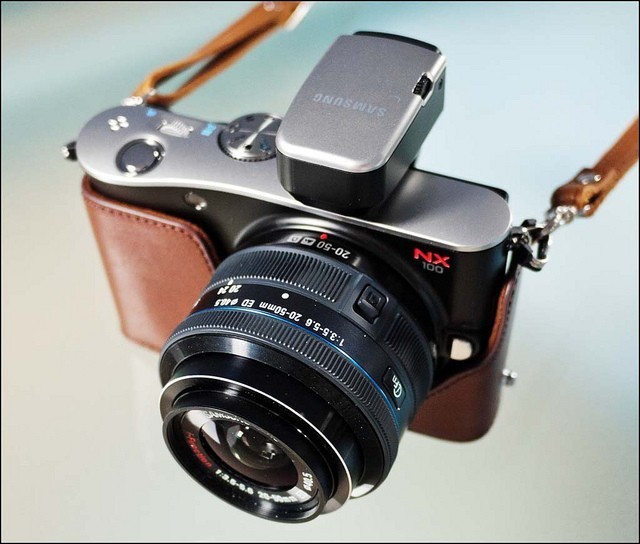 "Its a pretty simple camera in terms of handling, and I don't have any problems with it. Its pretty well laid out, the menus are straightforward and the most used controls are easily accessible. (Olympus and Sony take note!) The AMOLD screen is just about the best available currently and while not perfect, it works well in bright sunlight. The EVF is only marginally better than the Panasonic GF1 equivalent, which isn't much of a compliment, and some way short of the Olympus EVF and the Panasonic built-in viewfinders. Focusing manually with it is VERY difficult."

"In terms of image quality its OK. The results are certainly softer than Panasonic m4/3. About on a par with the Olympus Pens but with less luminance noise than those cameras. Images sharpen up nicely in Photoshop, but this sensor (originally on the Pentax K20 I believe) does need replacing, as its pretty ordinary at high ISO's. I've seen tests which rate it lower than m4/3 for noise at ISO 800 and above, and certainly its not a camera I would use in those situations."

"Despite these reservations I really do like using it. Its simple and unfussy and a pleasure to use. It is terrific value compared to its competition and you get a lot for your money. The EVF adds extra cost but in most situations I don't use it, since the screen is so good."

"Finally my congratulations to Samsungs designers. I think they have come up with a little gem. I love its combination of black and silver and the retro and modern elements sit together very well. Its feels very well made in the hand. I got a leather case for it from ebay and it certainly looks good in that. I gather the camera is all plastic, but it neither looks or feels cheap."

"I'm certainly glad I bought it, though I'm looking forward to an "improved" version, the NX200 rumoured for later this year. I certainly like the design, handling, layout and ease of use very much. It does allow me to concentrate on the important process of taking pictures without having to "battle" the camera. Those are virtues that shouldn't be underestimated."

What do you think of these?

Canon What do folks think about a Canon CSC?
2 3