Film What FILM (!) photography related item did you buy this week?

Copying a thread from a sister site

You'll have quite a kit when you get that body!

A Pentacon Six TL in very good nick with Biometar 80mm f/2.8, Flektogon 50mm f/4 and a Schneider Xenar 135mm f/3.5 on a bellows. The camera is actually quite comfortable to hold and shoot - but we'll see how I click with the lenses (I bought the set for a very good price - and may or may not find a use for the 135mm; I'm looking forward to using the 50mm, though - extremely so, in fact).

Bought some distilled water to mix chemicals, does this count?

I know it looks crazy, as I wasn't planning on buying anything any time soon after acquiring the Pentacon Six, but I cam across my actual dream camera with one of my actual dream lenses mounted; here goes: 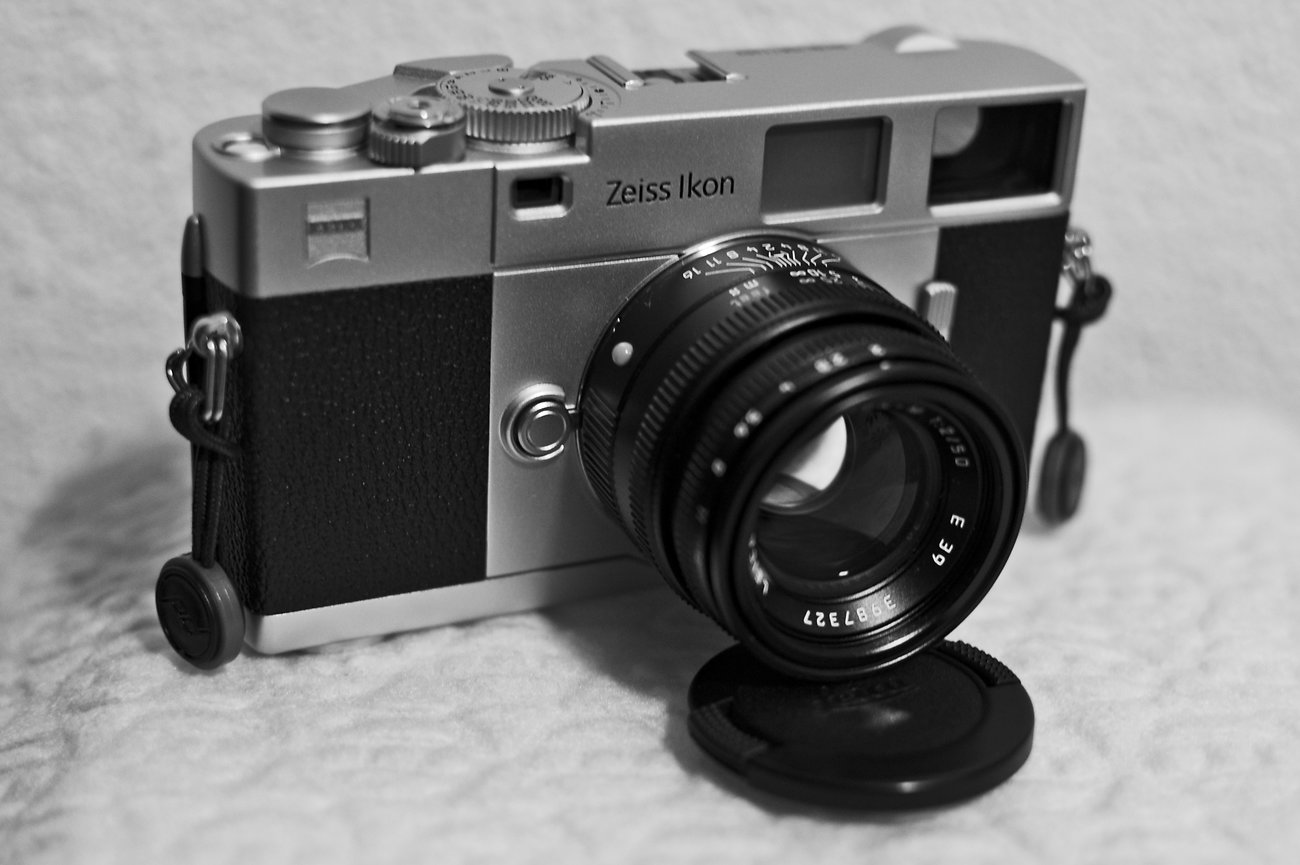 Congratulations on a dream come true. My ZM is probably my most pleasant camera to use. My dream is to have it's viewfinder put into my M9!

@MoonMind wow Matt, that is a great buy. Enjoy and show us the results!

José said:
@MoonMind wow Matt, that is a great buy. Enjoy and show us the results!
Click to expand... 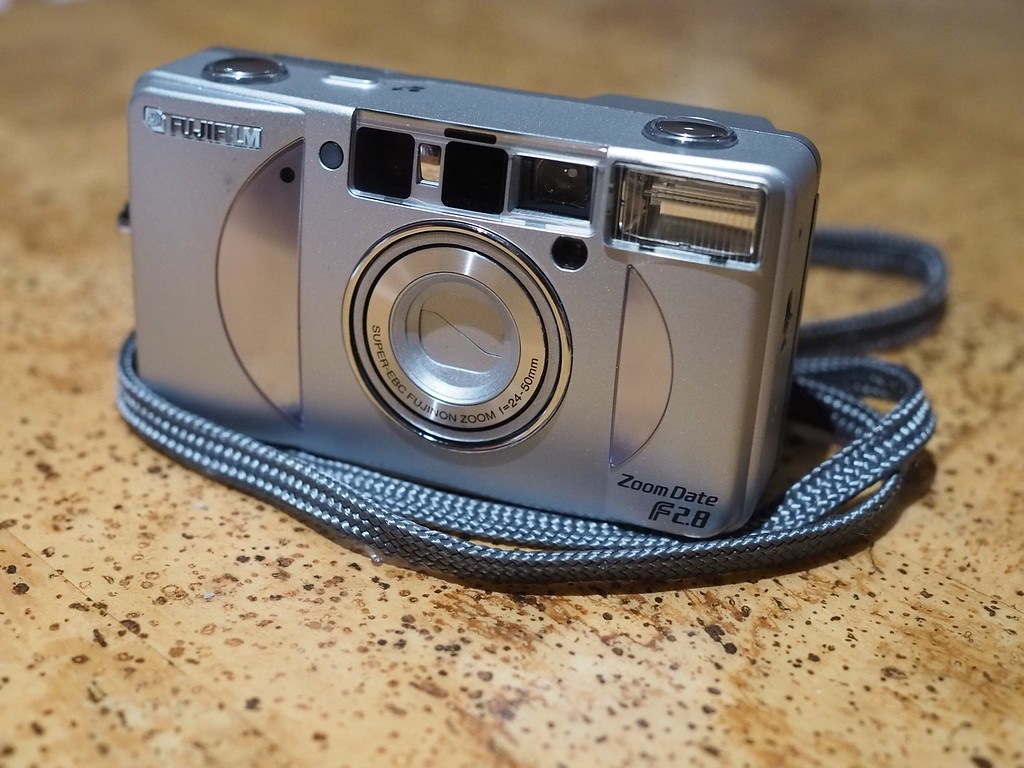 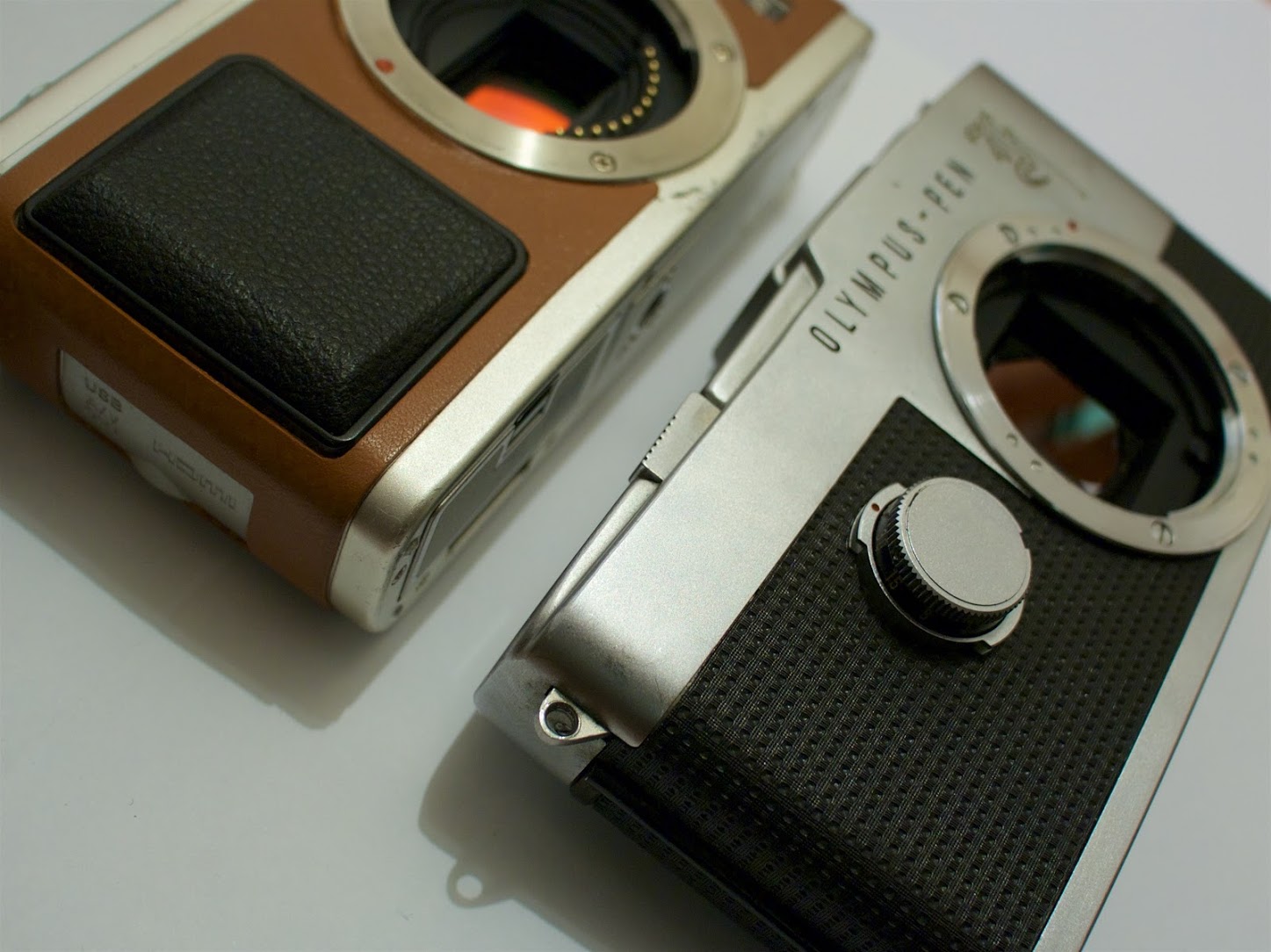 Subscribe to see EXIF info for this image (if available)
Last edited by a moderator: Jan 26, 2017

@phigmov The image doesn't display in my browser; I know what one looks like, though - have an FT

So... I was looking for a 645 with interchangeable backs. Bronica or Mamyia. Here it is: 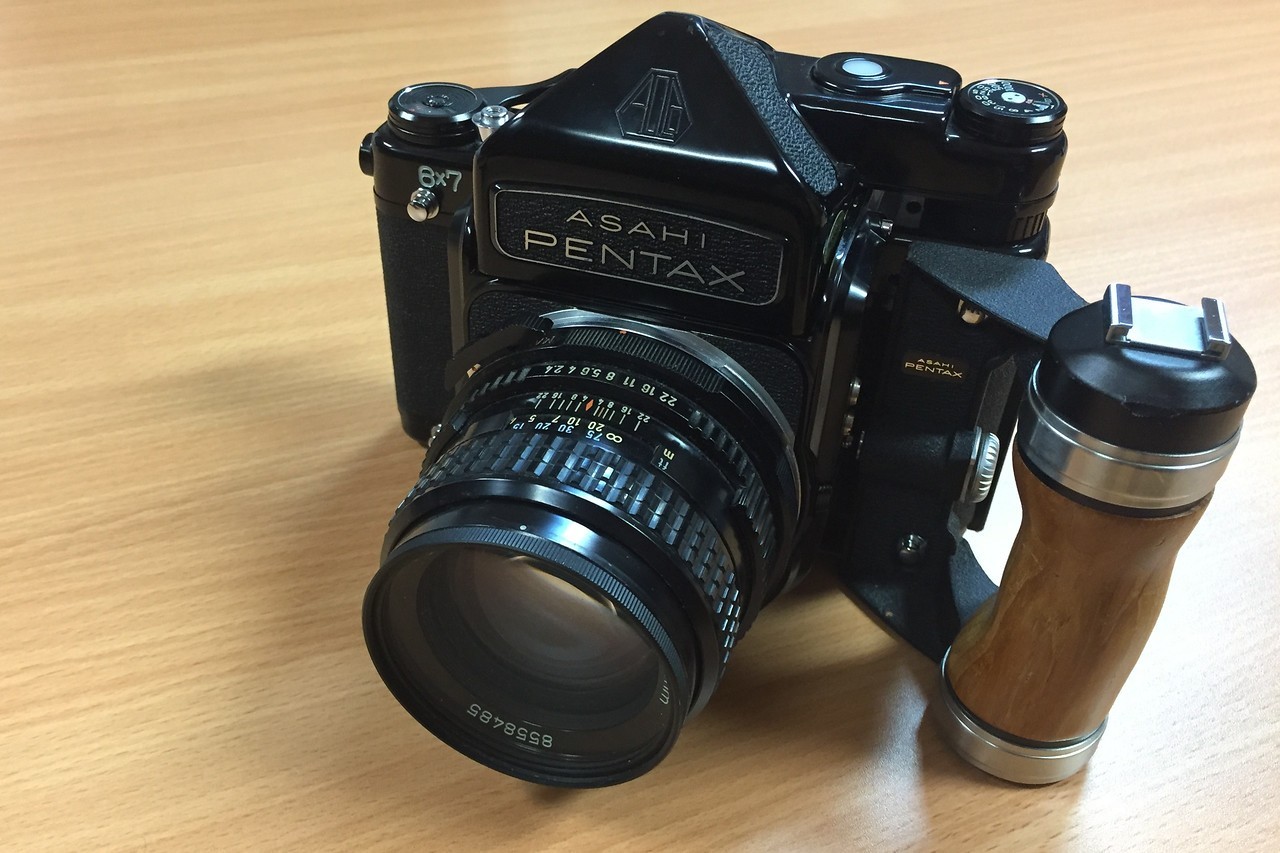 José said:
So... I was looking for a 645 with interchangeable backs. Bronica or Mamyia. Here it is:

Sweet, but my arms are aching just thinking of carrying that. OTOH, MF film is gorgeous. I still sometimes flirt with the idea of buying another Mamiya 1000S. 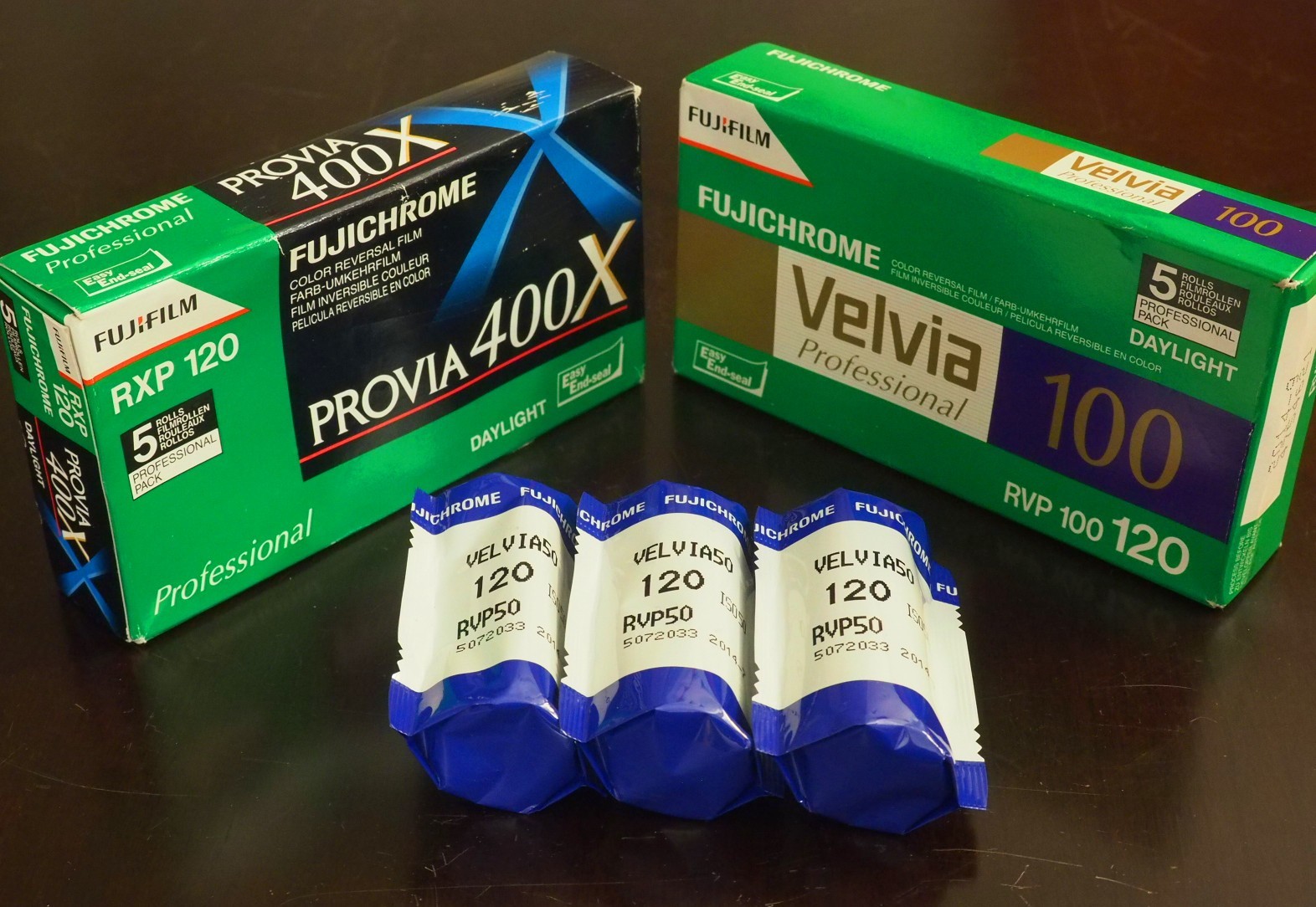 Not fully film, but I did get a mint condition RMC Tokina 17mm f/3.5 in K mount. It's presently attached to my X-T1, but I plan to use it with my Pentax MX, too.

Digisix2 Light Meter. My old Sekonic was acting up, and for some reason got worse after I fixed it. Anyway, I like light meters, they seem sort of cheerful to me. 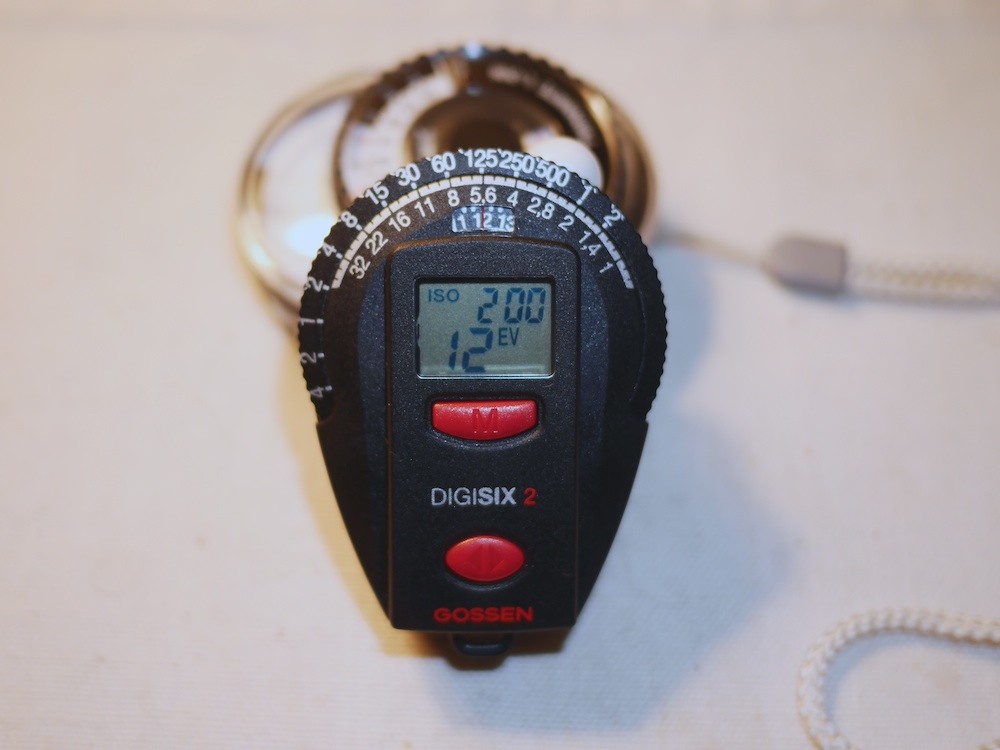 A roll of Agfa Vista

I was much more enthusiastic

Here's a full list, because it's fun, but it also shows what I'm up to:
- A late, non-radioactive Pentacon Biometar 80mm f/2.8 MC (multi-coated) - my current lens isn't just emitting, but also slightly damaged (the rear element has a visible mark in the centre).
- An eyecup for the Pentacon Six standard prism
- A TTL prism for Kiev 60, adaptable to Pentacon Six - got a very good deal on that one
- the adapter for the Kiev prism
- the battery adapter and correction lens for the Kiev prism - may not be necessary, but both pieces are cheap enough
- body cap and lens rear caps for Pentacon Six and lenses
oh, and
- a Leica Elmar 50mm f/2.8 (the last collapsable model that was produced)

The Pentacon Six setup is more or less complete (though I may get an additional body because there's a couple of them available for little money). As for the M setup, I might get a 28mm at some point in time, but no rush. The Elmar makes an already small kit sublimely slim and most probably pocketable (the ZM actually fits into a large-ish jacket pocket with the Voigtländer 35mm attached, but the bulge is a bit too big for my liking; the body alone is fine).

It's getting hilarious. Word of my camera fixation has gone around. A friend of my father's insisted on selling me *his* dad's camera. I couldn't refuse - so now also own a Voigtländer Vitessa (II); it's the cheaper model with the 50mm f/3.5 Color-Skopar - but what an intriguing camera. I'll get into this a bit more once I've shot a roll with it ... 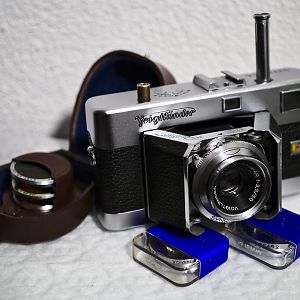 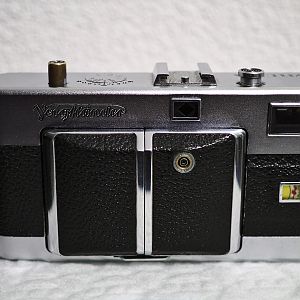 The "snorkel" is actually the spring-driven fast film advance mechanism - not elegant, but very functional. The camera is extremely quick to deploy, has a coupled rangefinder with a decently bright viewfinder and a symmetric folding mechanism ("barn doors"). Peculiar, but quite compelling in use - very sturdily build and well thought out.

Film Where do you buy film?
2

Film This is why film rules over digital?