Hi There . . . well, actually, it was a response from Fuji UK, which was honest and straightforward, combined with an offer from my dealer to have it back . . . and taking a few more snaps:

What is the story behind the Fuji response/dealer etc?

I have to say that I really do love mine. I find it quite forgiving too.

Bruce,
You can follow Jono's escapades at Getdpi.
He provides much energy over there, here also but he has many interesting post there.

Jono,
It's a good thing your keeping the camera to further try it out.
I'm sure you'll provide interesting post about it.
Don

If I may quote:

No, if they'd done that then I'd not have believed it, partly because I'm aware of how little influence overseas branches of Japanese companies actually have. Partly because, writing software myself, I realise that giving a schedule when you aren't contractually obliged to is complete madness!

I made 4 points to them

These were the main points I brought up - I'm aware of all the other bugs/issues, but these were the ones which I found irritating.

Somehow, when someone acknowledges and apologises for something . . . . it doesn't really matter anymore. Like you, I can live with these issues.

Jono, you are a tease! :smile:

The pic with the glasses is fav of the set!

AH Jon, thanks for all your posts on this camera, I am really interested how it works out with the firmware updates; given those it could be a Digital Hexar!

Lovely series, Jono. The camera seems to agree with you. Glad we'll be seeing more X100 photography from you around these parts!

Don, I've yet to touch my X100. I look forward to trying it, but it is highly unlikely that I will keep it for the reasons we discussed.

I will definitely be keeping my X100. It presents a bit more of a challenge in some ways than I expected, but the image quality is absolutely incredible. For some resaon the menus don't drive me crazy and I'm not sure why. The ability to shoot at higher ISO speeds than I have attempted before opens some incredible possibilities and the JPEG quality is something I have yet to get used to since up until now I was a 100% RAW file user. It's definitely a keeper.
. . . David

'Kind of a follow up to my post and others on this thread - This is not the type of photo I typically post on forums. It's a grab shot, a snap shot from yesterday of my Grandson and my younger son, (ya, I know) jamming at my older son's home. 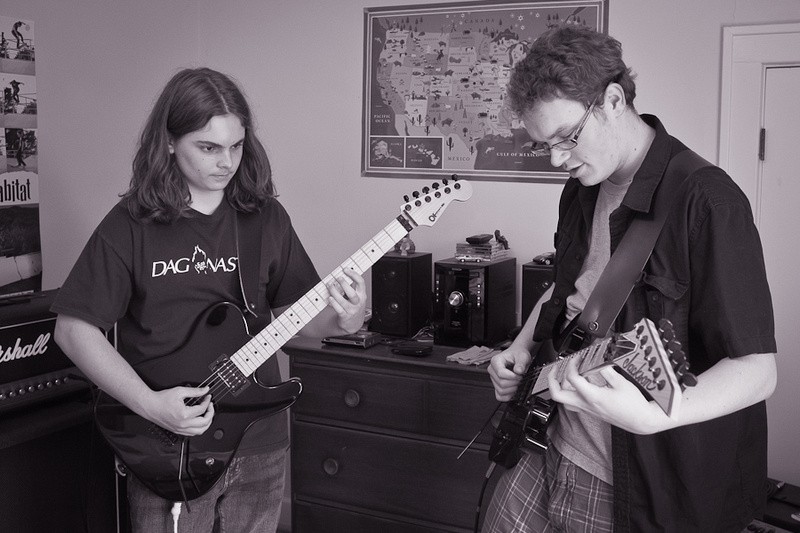 Subscribe to see EXIF info for this image (if available)
A pretty low lit room so I shot at ISO 1000. This particular frame is from a RAW file and yes I still like the JPEGS a lot but old habits are hard to break. It probably isn't obvious in the image I've sized down to post but the 6" X 9" print is unbelievably sharp with really no visitable noise, mild noise reduction was introduced during post in LR.
So, da' more I use it, da' more I like it and subsequently the more I learn about it's nooks and crannies. 'Just some thoughts.
. . . David

Well Jono. Beings that I'm in Philly, the Deardorffs are sleeping gently.
I would only use them if I get a craving for Platinum Prints again... not likely...
Don

Streetshooter said:
Well Jono. Beings that I'm in Philly, the Deardorffs are sleeping gently.
I would only use them if I get a craving for Platinum Prints again... not likely...
Don
Click to expand...

Hi Don - well, we all have sleeping partners, my current snoozer is my A900 - but I guess it'll gradually come back to life!

M
Fuji Blog POST: My fave camera: The X100S (or why I love my Fujifilm gear)

Fuji Should I Keep my New X10?