I've done this partial disassembly a couple of times now. The walk-through will give you access to a number of inner lens surfaces for cleaning, and it will show how to fix lens wobble. All without chance of ruining the focus or calibration.

All you need is a 1mm flat-head screwdriver. 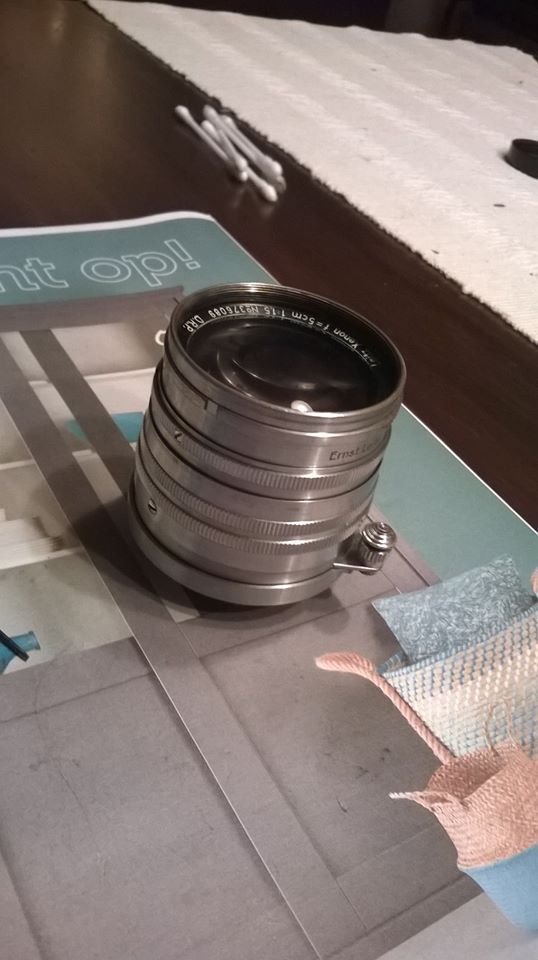 The Leitz 5.0cm f/1.5 Xenon, 6200 units manufactured and 6190 sold between 1936 and 1950. Presumably made by Schneider-Kreuznach, and sold with Taylor-Hobson patent markings for sales in the US and UK.
Generally speaking f/1.5 is a little far-fetched for the design but stopped down it gives pleasant images.
Most Xenons these days suffer from marked coatings and internal fogging.

The Summarit 5cm f/1.5 is also very similar in construction with exception of the service openings in step 5.


Step 1. The front lens group simply unscrews between the aperture scale and the aperture ring with the arrow. 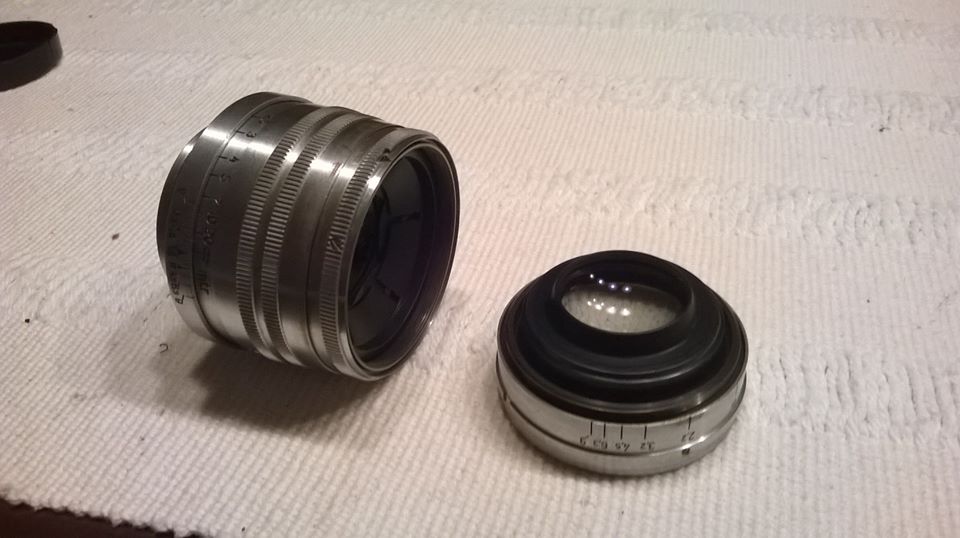 *****​
Step 2. Removing the outer aperture ring (with the cut out for indicator arrow). There are 3 small screws holding it in place. Remove those and lift off the ring.
Don't worry about the aperture blades falling out. They are held in place by an internal ring secured with two more screws. You can leave those where they are. *****​
Step 3a. Remove the set screw from the focus ring. It holds the part of the ring with two (or three) knurled rings to the part with the tab. 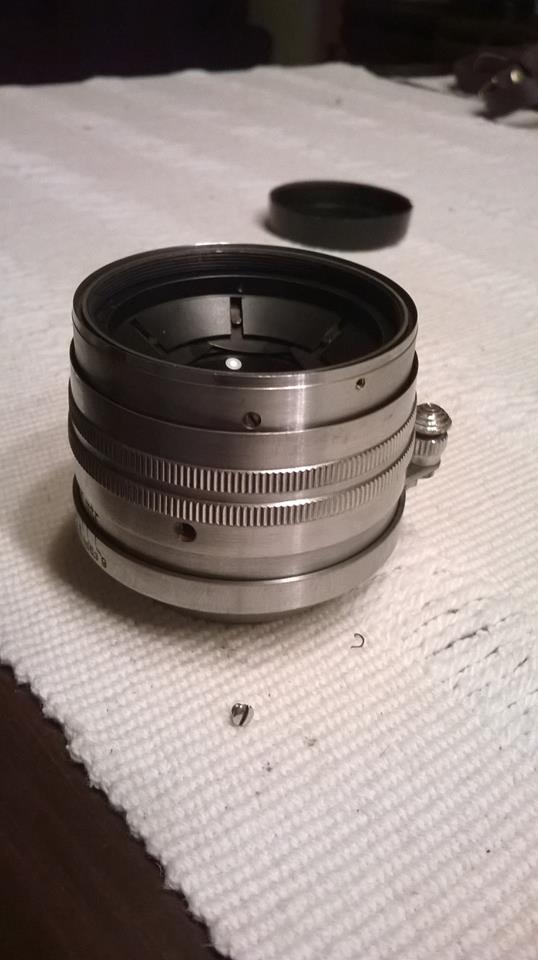 *****​
Step 3b. Unscrew the knurled rings from the focus ring. This might require a bit of force the first time. 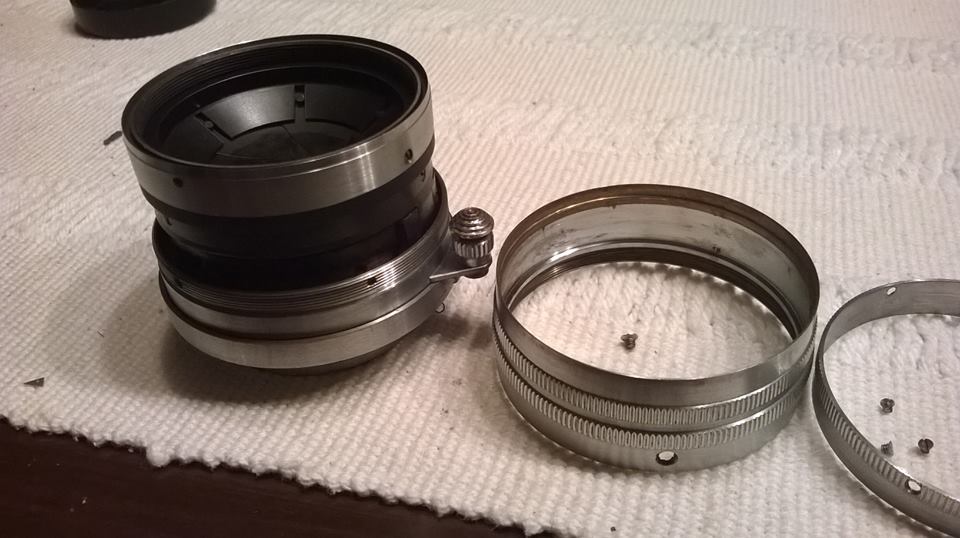 *****​
Step 4. Loosen the 3 set screws from this ring (indicated with the screwdriver) around the lens. 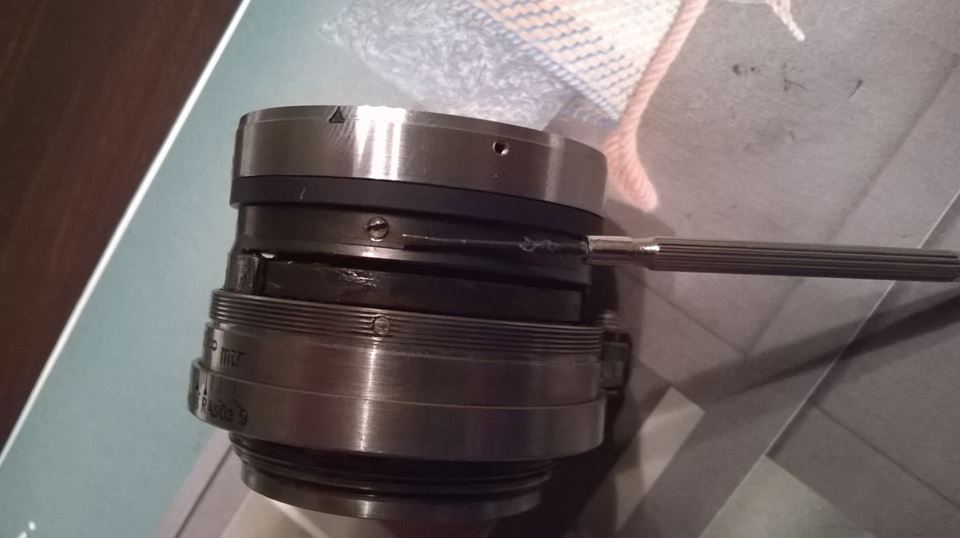 If your lens tube was spinning freely in the focus mount, then tightening these 3 screws should fix that problem.
When reassembling check were the aperture arrow is going to be in fully stopped down or wide-open position. Loosen and set these 3 screws to adjust where the aperture numbers/arrow are going to end up to your preference.
After setting the screws you can secure them with nailpolish or shellac.


*****​
Step 5. In order to remove the second lens group (complete with the aperture blades) from the lens tube, stick the 1mm screwdriver in one of the two service openings, turn the 2nd group round a bit until you feel the screwdriver locking it in place. 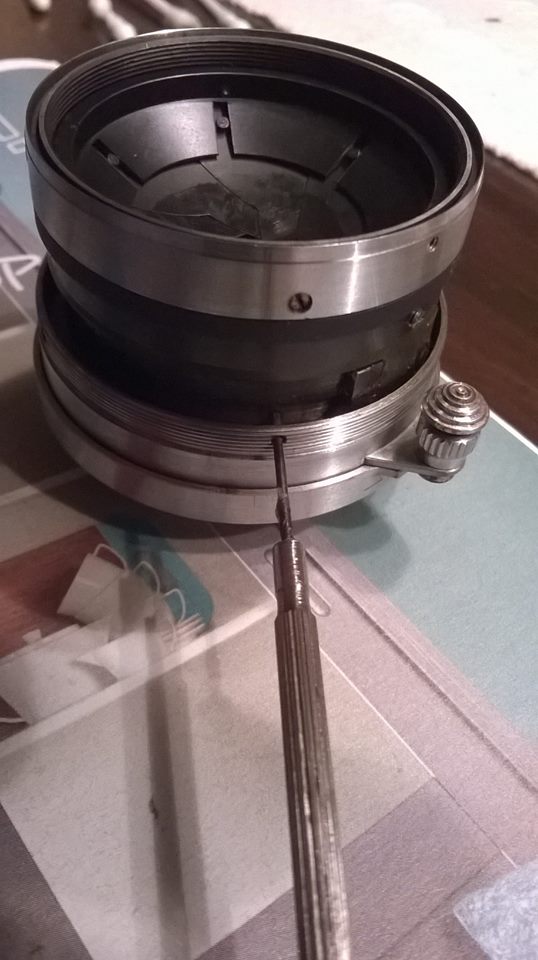 *****​
Step 6. With the screwdriver secured in the service opening, unscrew the second lens group. 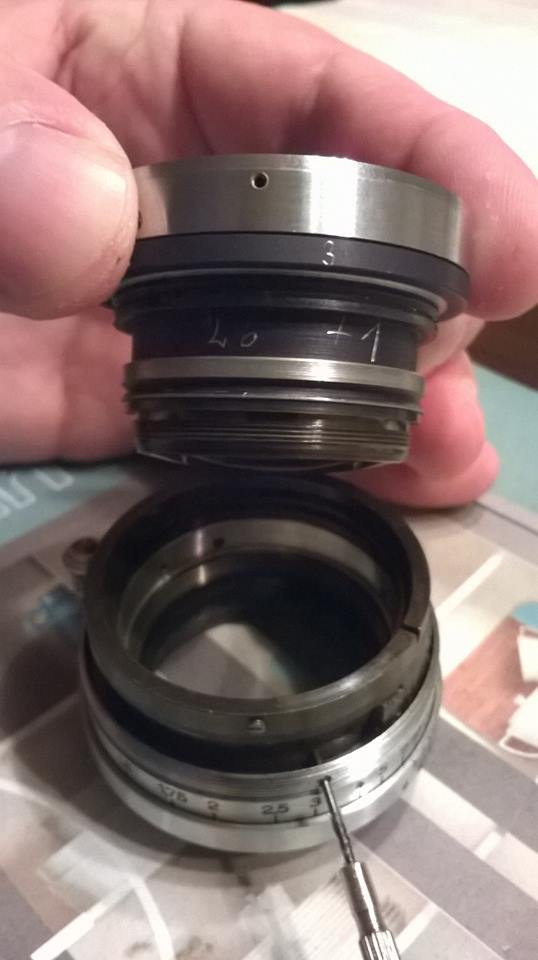 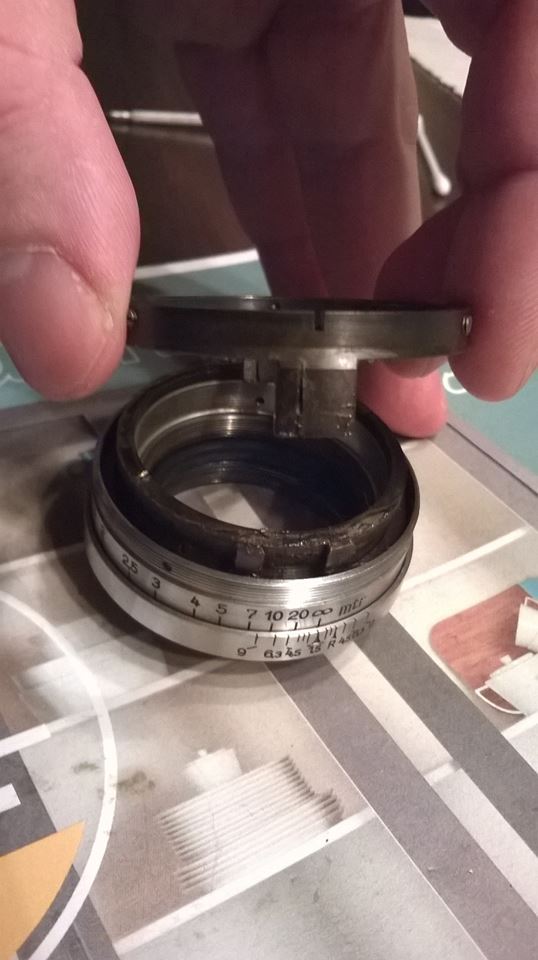 The two tabs at both ends of the ring are split in two. If these split tabs get compressed by forces applied to the lens tube, the front end of the lens will wobble.


*****​
Step 8. To remove the wobble I took a sharp item (like your trusty 1mm screwdriver) and wedged the tabs apart a bit and then proof fit them in the slots they slide into, until they were nice and tight. This completely eliminated the front-end wobble. 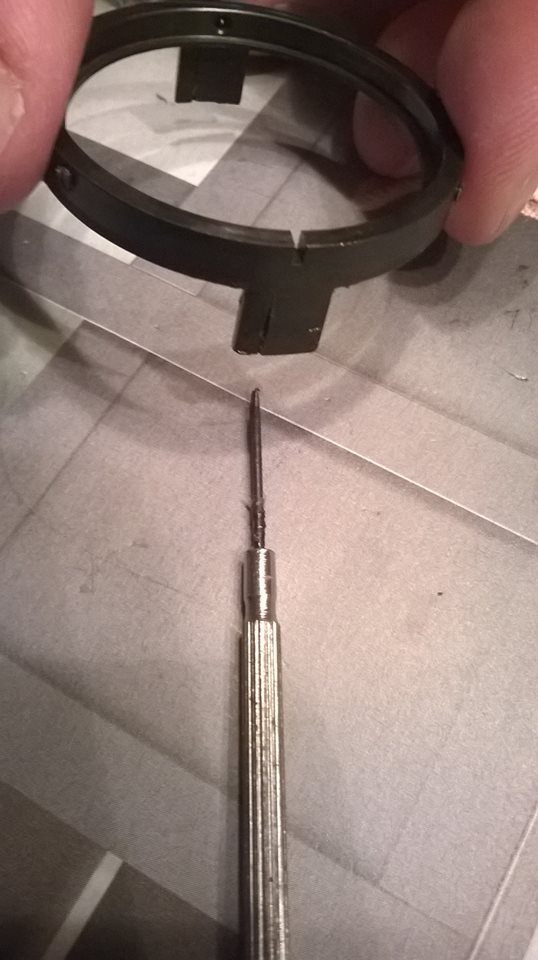 *****​
At this point you can clean most of the internal surfaces of the 7 lens elements.

Reassembly can be done by following the instructions in reverse order. The only thing to pay attention to is the 3 set screws in step 4, they determine how the front end sits on the lens. Just make sure your aperture ring arrow ends up somewhere where you can easily see it through its full range of motion, before securing those set screws.
Last edited by a moderator: Oct 14, 2016

This is the first time I've ever seen comprehensive instructions for disassembling this lens.

I recall I used a disassembly guide for the Summarit the first time taking it apart. The only difference, as stated, is that the service openings on the Summarit are hidden directly under the screws on the focus ring.

Moderator
I've made this thread a "Sticky" in the Leica forum. It is the only detailed instructional for taking apart a Leica mount Xenon 5cm F1.5 that I've seen.