Critique Wanted Your opinion please, on these photos.

It was friend and colleague Richard's birthday today. Richard is the lead singer for local band The Hybernators. We stepped out for lunch, beautiful sunny day. He broke into spontaneous song and I knew I had mere seconds to take some photos, I managed three before it was all over.

The first photo was sort of ok, composition passable: 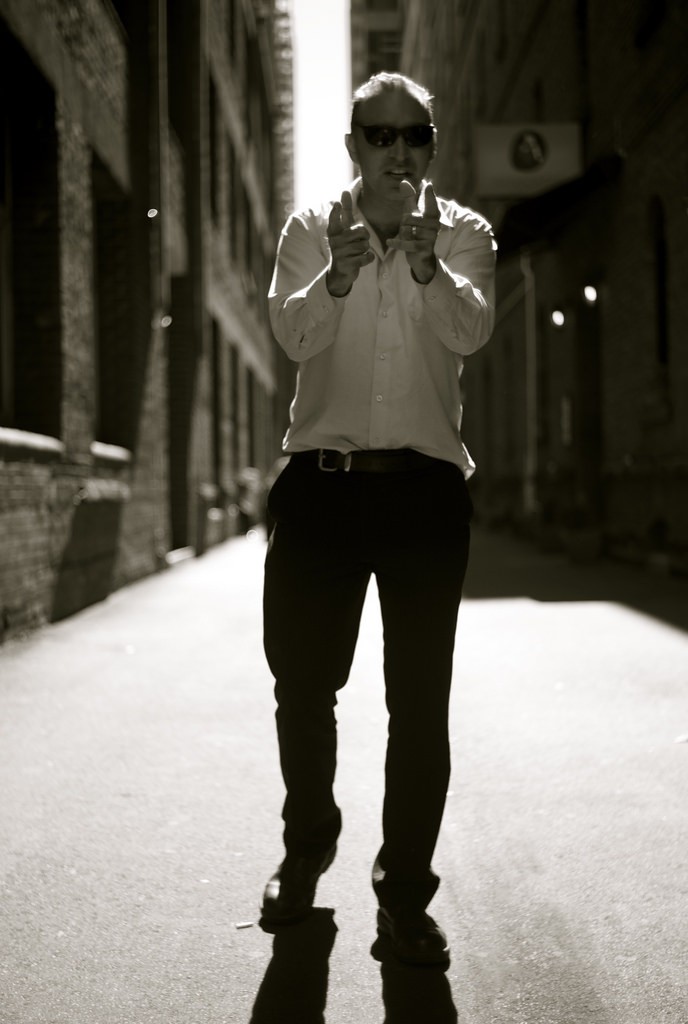 The next two photos had some serious sun flare. This one below I nailed the focus but cut off his fingers: 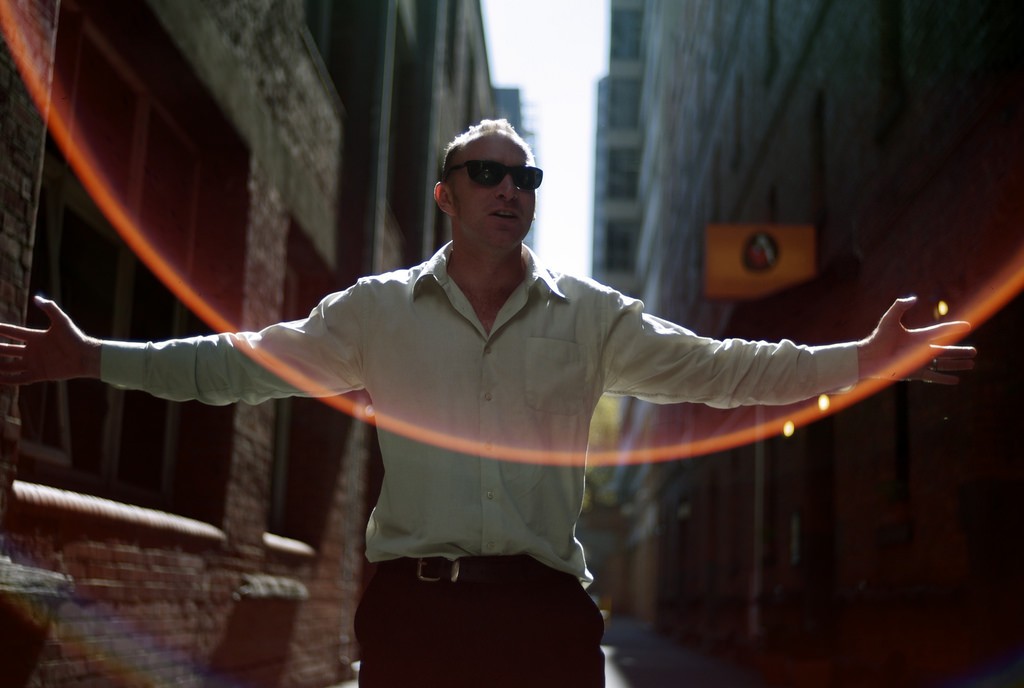 I was able to compose much better in this next one but in an effort to go for a backlit look, it didn't turn out so well and the original photo just looked underexposed. Raising the exposure in post, I guess the resulting noise/grain looks 'ok'. I think it actually has the look of a 16mm or possibly even a super-35mm film frame from a movie reel:

What is your opinion on these photos? Obviously the sun flare is a problem but since it is well and truly present in the photos, I personally don't mind it being there. Under normal circumstances I like slight imperfections in photos, I think it gives the photos some character. The flare here is very obvious though, is it far too distracting? Does it go far beyond 'character' or even as a 'feature'?

In fact in photo #2 I think it has an old burnt-out 60s or 70s-photo look about it. Is that how you interpret it too or is it just me?

How would you have processed these photos?

Or would you discard them as un-useable and hope to catch the moment again on another day?

The flare doesn't bother me at all. You captured the moment, which is more often more important than a technically perfect photo, in my humble opinion. Second photo was my favorite! It does have a "vintage" look to it. Very nice!

If you're going to have flare have it in spades like these shots. Adds spontaneity to the shots.

Wow, excellent! I think it's far more important to capture the spontaneous actions than it is to get the "perfect" shot. Great work

Yeah, #2. I don't mind the flare - the way it sort of echos his arms actually seems to add a bit. And great spontaneous moments...

Thanks everyone, your opinions matter a great deal. Sometimes I don't know if I'm too close to my photos that I can't see if they're glaringly bad ones (please feel free to critique if I do!).

I think they're great! I love the flare!!Super.

James, for me it's the first one that my favorite, though I really don't mind the lens flare on your third at all, because it does seem to fit with his expansive gesture.

My bet is that if you took the RAW or DNG file from your first image and had a chance to enhance it with a good software such as Lightroom and Silver Efex, that you'd be amazed. This first one is sort of a classic stance... Not knowing this fellow, I might draw all sorts of wrong conclusions about him, but he looks like an entertainer, and if not that he certainly looks like someone who is a live wire. Now, that I've reread your description, I see that I am correct. This first image has, to me, a very strong graphic nature. The design elements lend themselves to black and white and I really think it's got a great deal going for it. Save your money and get some better software and I think you could easily be floored by how good this first photograph will turn out to look. I bet your friend would love it, too.

Definitely the first one IMO. The flare doesn't really do a lot for me and I prefer the wider perspective on the first. The second two are a bit too closely cropped and you lose the sense of the depth of the lane. The first also appears a bit more personal, I like his interaction with the camera. Also the backlighting, the harsh shadows...

My bet is that if you took the RAW or DNG file from your first image and had a chance to enhance it with a good software such as Lightroom and Silver Efex, that you'd be amazed.
Click to expand...

Thanks BB, I wonder if it's me or the software because even with the software you recommend I wouldn't know what I am missing. I need a push on to the next stage in my photography so please don't be afraid to lay it on me!

I have Photoshop (it came with the Adobe Production Premium package) although I haven't had a chance to really learn how it works yet. Do you recommend Lightroom and/or Efex over and above the Shop?

Luckypenguin said:
Definitely the first one IMO. The flare doesn't really do a lot for me and I prefer the wider perspective on the first. The second two are a bit too closely cropped and you lose the sense of the depth of the lane. The first also appears a bit more personal, I like his interaction with the camera. Also the backlighting, the harsh shadows...
Click to expand...

Thanks Nic for your perspective, I forgot about Richard's interaction with the camera in that first photo being a big plus. See this is what I mean, I miss things sometimes in my own photos that I would've picked up in photos from others.
A

I like the first, although if it were me, I would crop it in a square format. Try it and you'll see what I mean.

The second is cool, although, as you said, you chopped off the fingers. The third is the best, IMO, and I think you can emphasize the expansiveness even more by cropping at 1:2.4 anamorphic aspect ratio, and doing a bit of dodge on his face. It will create even more of a cinematic feel, which I think will work well. Even try a cross-processed look with this one, bring out the greens and darken the blacks, but boost the highlights.

But that's just how I would do it.

I like all three shots. However, my favorite would be the third. Since you asked for suggestions on how to post process the photos, I have tried two versions of the third shot. I hope you don't mind, but if you do, let me know so that I may delete the post.

For the color version, I opened the file in Adobe Camera Raw. As you may know, you can open JPEG and TIFF files in ACR. I used ACR to get rid of the strong green cast on the picture, bring out some more information in the shadows and tame the highlights. The cast was taken care of using the dropper on the subject´s shirt, and the shadows and highlights were modified using the Fill Light and Recovery sliders, respectively.

The file was then opened in Photoshop and noise reduction applied with Nik Dfine.

For the B&W version, in addition to the above, I opened Nik Silver Efex as an Adjustment Layer. I increased the structure, applied copper toning, and through control points slightly lightened the subject with relation to the background.

Here are the results:

Hope you like them. Good job on the shots.

In regards to the modified version of Jame's original version that you provided,

I really like that first one. Really adds some drama to it. The lack of color I think takes away in the second.

So James, what do you think...was this helpful, thought provoking, annoying... Should there be more discussed...software stuff or have you had enough? I feel as though we just left things up in the air. I'd like to hear what you think - when you have the time. I know you're very busy between studies and work and studies and work...and life. Just wanted to let you know we're still here.

Help me evaluate these photographs, please