One of the things I needed to test on this camera was focus, but it turns out that focus is nothing without something approaching correct exposure.

I think the shutter's running slow, because I've used my iPhone's light meter app with two other film cameras and gotten far closer to correct exposure, usually nailing it. The photo below is probably three stops corrected. It's at least two. It was black & white negative film and that's usually a bit more forgiving.

This is too long an exposure to expect a great shot.

I suppose what I need to do is a series of tests, but I'm not sure quite how to approach the subject scientifically with a couple of rolls of film.
G

I had to Google Zeiss Super Ikonta III just to understand the subject, lol.

Interesting. Would love to hear more, as you play with the camera. 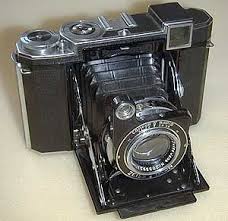 Andy is that one now yours?

deirdre said:
Andy is that one now yours?
Click to expand...


He he, no, I just pulled an image off the web so peeps can see what the camera looks like.

I once briefly had Super Ikonta C.
OMG the negs were huge and printed nicely!